Any controller recommendations for the VST MultiPanner?

Hi everybody,
What would be good and affordable controller recommendations for the VST MultiPanner for mixing in 3D?

Would be interested, too. Up to now I use a combination of simple mouse control for the X/Y-plane and a MIDI controller for Z. I can use them at the same time with both hands.

For straight-forward MIDI control the Panner misses a view targets, e.g. the “Orbit Center”, which is a dedicated knob in the GUI, but always recorded as combination of L/R and Front/Rear-Pan, which makes it impossible to use the conventional QC mapping.

What about the Arteffect SR Panner?

… Love the website where they talk about “Sterinberg’s (sic!) Nuendo or Cubase”.

Anyway: Looks interesting, though I don’t see any obvious way to control X,Y and Z with a single device. Do you know how much they sell it for?

Anyway: Looks interesting, though I don’t see any obvious way to control X,Y and Z with a single device.

I’m pretty sure that Peter can re-program one of the soft knobs so it controls the height.

Do you know how much they sell it for?

Last thing I’ve heard is that it sells for around 950€.

And what about this one?
http://devices.arteffect.de/xy-ctrl.html

Yeah, I’ve looked at it, too - thanks. Doesn’t look like a motorized joystick, though, which makes it hard to pick-up from existing automation …

Have to dissapoint you, because there aren’t any.
Motorized Joysticks are patented by Harrison (made by P&G though), so you won’t find them in any device, unless they have licenced/bought them from Harrison. Which makes them insanely expensive.

I already had a feeling that I’ll stick to my tried-and-tested two-handed approach.

The so-called “Surround Panel” of the Neve Capricorn I worked on for many years had a quite smart combination of two joy-sticks and an animated graphical display for showing existing automation passes, but as a matter of fact I rarely touched them and used ITB solutions instead.

Maybe I also should share some of my own ideas as well.
What I’ve been thinking about is doing a small system based on something like a Doepfer A-174-4 Joystick with MIDI-conversion or something more plain like an Xbox One , PS4/PS5 (because of their touch pad) or a Switch Pro controller (because of it’s gyro). But I’m not sure whether the last to would work readily with Nuendo.

Would there be any major drawbacks with those?

Has anyone tried Sound Particles new “Space Controller” Plug-in. Using your smartphone as a joystick. Might be worth a trial. 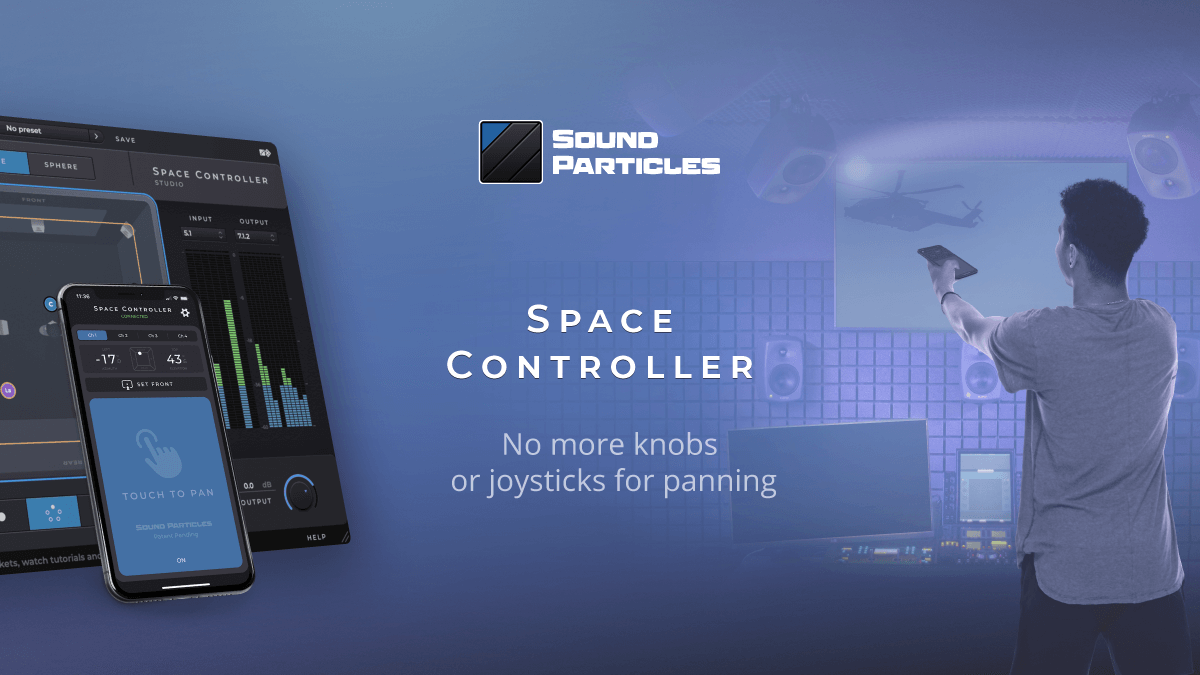 Space Controller uses your phone as a movement reader and pans the sounds to where you’re pointing.

Wow! “Space Controller” looks very enticing. Thanks for the hint, it’s the first time I hear about that concept.

My main problem might be that my system assembler has forbidden any kind of WiFi device on my DAW, but adding a Bluetooth receiver shouldn’t be that hard.

am also quite interested in such controller. But couldn’t find one so far any close on functionality and/or price.

Spent some time to build my own GUI with TouchOSC running on a 10" Android tablet. Interfaces via a couple of Generic-Remotes being added to Nuendo.Works quite good.

Can switch between tracks. Settings on untouched tracks remain as is. Switching between tracks picks up values even when changed in the classical way with mouse and Multipanner plugin on a different track.

Has however some limitations, partially due to Nuendo limitations on missing access to certain parameters of the VST-Multipanner. E.g. rotation around the center of the 3D room. I do not mean rotation of e.g. a Stereo signal around its own center. This works.

Here are some screenshots.