I don’t seem to be able to access either Kontakt or ARIA player in Dorico 3 . Ive done all the usual things , like making sure they are included in the Vst2 whitelist, but nothing seems to happen. Is there something I am missing?

Is there something I am missing?

Presumably, yes! ARIA works well for me. My whitelist reads “ARIA Player VST Multi”, and that’s it. Remember to restart.

What OS are you running? Does ARIA work correctly in other apps?

@mjhealy: I have them both running in Dorico 3, on Win as well as on Mac.
What OS are you on and what version of Kontakt and ARIA do you have?

Also, in Dorico choose from the main menu Help > Create Diagnostic Report.
That creates a zip file on your desktop, please attach it here. Thanks

Not sure what OS you are using but if you are on Windows and want the 64 bit version of Aria, your whitelist should look like this: 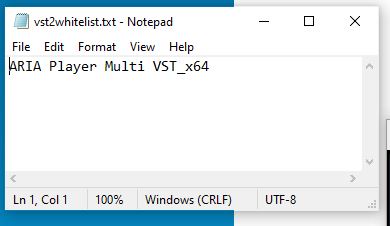 Can you get the VST3 version to work multi-channel? I haven’t been able to. If you can, please share how!

I’ve finally solved the problem. It was a relatively simple move involving spelling the VSTs correctly in the whitelist.This is what worked for me.

I previusoly had copied a whitelist from someone else’s suggestions that involved including x64 after the ARIA Player VST. That did not work. Also I needed to spell Kontakt exactly as it came up in Cubase , as Kontakt 5 8out
FYI I’m using Macos High Sierra with 2010 iMac

Not tried the VST3 yet.

The plug-in names might be different between Win and Mac, that’s why the “x64” thing, which is only relevant on Win.

And btw, you can also whitelist Kontakt 5 16out (atually that is what is in the factory whitelist by default.)

The VST3 Aria Player is not (yet) multi-channel.
Apparently developing the Aria player is up to Plogue rather than MakeMusic (so now you know whom to lobby for a multi-channel VST3 player.)