Attach/Lock the fullscreen project to the cubase application window?

Maybe a noob question but I don’t find if there is a tip to attach/lock the fullscreen cubase project to the main cubase application window ?
If I move the application, it resizes the window.
It’s annoying because I use 2 monitors and I need sometime to move the cubase application from monitor 1 to monitor 2.

The reason it works that way is because you can open more than one project at a time. If you do then you want to be able to access Cubase menu bar the window you are moving around it the project window of a project. If you had two open at once it would make more sense.

There are a lot of people who want the project window and the menu bar locked together, but that would make having more than one project open seem weird to me.

Anyway, since you are on windows, have you every tried using the windows task view? It’s very handy. I have a gesture that shows all of the separate desktops, and I keep Cubase in it’s own.

Maybe that would work for you.

You should look into Workspaces which let you save various Window layouts and call them up as needed. I use 4 monitors and have a bunch of different Workspaces. It took awhile to figure out what worked for me and I eventually realized I mostly only cared about where the Project & Mixconsole Windows were located. Here’s my current list. The monitors are numbered 1-4, left to right. If the Workspace name has a number in it that indicates it is empty - which are good for opening plug-in interfaces, editors & other misc. Windows. 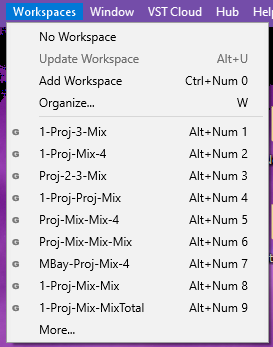 The reason it works that way is because you can open more than one project at a time. If you do then you want to be able to access Cubase menu bar the window you are moving around it the project window of a project. If you had two open at once it would make more sense.

I’m skeptical about this. Many other programs, Word for example, manage to open multiple documents at once without needing a silly unattached menu bar.

The Cubase/Nuendo menu bar on Windows feels like a (bad) effort to emulate a MacOS type of functionality.
Which is not needed, there are clear conventions on Win for multi window, multi project capable apps.
The Cubendo approach is a source of much confusion and also not very well implemented, with quirks and unpredictable behaviour.

The Cubase/Nuendo menu bar on Windows feels like a (bad) effort to emulate a MacOS type of functionality.

I think I would agree, if only you replace the word “bad” with the word “excellent”. Not having an application specific menu bar in windows is one of it’s many, many flaws. They might get rid of it someday, but the next hardware cycle, I would go back to Mac, and if I would do that, then many others would too, and if that happened, how many of us would just do our day to day in Logic?

Many other programs, Word for example,

Word? Word is the example? Word is the worst UI design ever. Lookup the “keyhole problem”. It’s when things that are used together are spread out among different popup windows that each require multiple selections, and you have to go between them, or when you have to dig deep into selections to get to what you need, or when you have a small area in which to make a selection. Word is the poster-child of the Keyhole Problem in UI design. Windows ~not~ having a unified menu bar, or standards for where menu items go is also a huge topic in UI design. Steinberg solved a huge design flaw in windows by providing a menu bar, and it’s very much appreciated.

It’s sort of what makes doing our work on a Windows OS machine even bearable.

If they take it away for some reason, I really hope they also provide the option to turn it back on.

Dude, I’m not endorsing (or even thinking about) the Word GUI - it’s just an example of a Window program which can open multiple documents/projects/whatever-it-uses without needing a floating menu bar. Would Photoshop or Quickbooks have been more acceptable examples?

Good that the floating menu bar works for you. Personally I find it a pain in the ass and suspect many (most?) others do too.

The OP is just trying to understand how put their Windows where they want them. Not sure that researching the “keyhole problem” is gonna be horribly useful for that. But I’ll work on that as soon as I finish an exhaustive study of the use of chromatic harmony in the economic analysis of the gilded age…

LOL
I came to windows late in life and have a strong disdain for the lack of a static menu bar. So this feature of Cubase is wonderful to me.

I wish there were a fixed location for VSTis and plugins, but I have never got that to work across projects. It doesn’t seem to be part of the workspace.

I came to windows late in life and have a strong disdain for the lack of a static menu bar.

That’s strictly your problem.
You’re wrong on all accounts in your other long post.
Go back to the Mac if that GUI suits you better.

I used both OSes and it doesn’t even matter to me which approach is “better” (nonsensical discussion). If I’m on Windows, I want the apps to behave like Windows apps.

I came to windows late in life and have a strong disdain for the lack of a static menu bar.

It’s all tong in cheek, I didn’t mean for it to be taken that seriously.
That was the point of the quote.

Your points are all good ones.