I really need help with something which I am totally clueless on please !!

I would like to try and make a couple of short videos to whack up on You Tube. What I need is the software were you can film (only) the entire screen of your PC (so exactly what someone would see at their end if they were taking remote access of your computer). There are many instruction videos on You Tube that show Cubase/Sibelius/Logic were the narrator just talks in the background and all you see is his PC screen and what he is doing on it within the music program.

If its a download, then something simple and easy to installed would be very much appreciated. i am not technically minded in this respect i am afraid. i have used Windows Movie Maker recently but that’s about all.

The only other option is to hold a camcorder in front of the screen but that method looks a bit amateur.

Thanks guys in advance. i hope someone can advice me and that i have explained it ok.

It seems that people use CAMTASIA. It this one which you mean ??

But I don’t think it works with Windows 8 ??

I have used Camstudio. It works well enough.

I’m kind of surprised that Windows Live Movie Maker doesn’t do this natively.

Thanks very much indeed.

I went to my local comp shop and they gave me some useful advice which I think I am going to follow. For 20 quid there is a program called FRAPS which will do everything (plus a lot more) that I need. The guy actually uses it to film his Xbox video games, and then posts them on You Tube (not sure who can be bothered to watch stuff like this ??) and he does the ‘narration’ over the top (which I can do in Audacity or Cubase), and then finally Import the two files into Windows Video Maker (and sync them up). Or just do the whole lot (sound and audio ‘live’ within Fraps). He made it sound very easy indeed and the download is simplistic and quick.

We now require a CPU with SSE2 instructions (Pentium 4 & above). Windows XP or higher is also now required.

See what you think anyway. It seems like half the world is using this program…

News about the latest version of Fraps. See a changelog of recent features, fixes, & improvements!

It seems that people use CAMTASIA. It this one which you mean ??

But I don’t think it works with Windows 8 ??

I’m not familiar with brands for this type of software. I can’t recommend a specific one but I’m sure you’ll find one that works for you.

Fraps is fine, it has a free version which I suggest you test before you go and make the purchase. (it’s got some limitations and it adds a small watermark to your video saying you’re using the free version, but that should be good enough to find out if fraps works for you). Fraps is widely used so I can’t imagine it wouldn’t work in Windows 8. If it didn’t you should be able to find plenty of reports on the internet on that.
There are several others, each have their pro’s and cons on video quality, filesize etc.

I found one (relating to CamTasia) called CamStudio and it is FREE. I downloaded it and quickly tried it out last night for 10 x mins and it seems to work ok. But I have not added a ‘voice’ nor imported anything into Windows Movie Maker.

I will download FRAPS now that you have confirmed it is Win8 compatible (ta!). I will have a play with it this week. If CamStudio can not cater for my needs then I will most probably purchase this one.

As stated, I am using Windows Movie Maker at present but l have been kindly pointed towards Sony Vegas Movie Studio by a friend. It is certainly very more comprehensive than WMM but again, I am not sure if it it Win8 compatible ??

Well I spent THREE days now trying to get this screen catcher software married up. But will it work ?? Will it hell !!

The FRAPS I could not get anything whatsoever out of it and so I can only assume that the salesman was incorrect in saying that it can be used to capture events other than Xbox games. I spent two hours alone just tonight on it and I got it to do big fat zilch.

The CamStudio captured all the screenwork in Cubase and otherwise, but SOUND was a different story. It would record me talking into a headset mic and would playback fine. Also, it would record my external synth (running into a C12+ Interface) and back out thru the connected headphones. What it damn well would NOT do (and I swear I have tried every possible permutation I could think of), is :-

Record the internal sound of audio files playing in Cubase !! I could hear them when I pressed play (with the CamStudio running in ‘record’ mode), but no sound whatsoever during playback. Just a silent movie picture !!

Aghhh, I have been on this since Friday and I am nill closer than I was then !! Total head wreck and a waste of what should have been a very musically creative weekend.

I would be willing to PAY for help…

For anyone interested, APowerSoft will NOT work in recording audio internally of Cubase. I Skyped the manufacturers in Hong Kong last night for an hour and they confirmed (admitted) it is not possible. So I am extremely pleased I had not listened to the sales team over on Monday and purchased it for $59 !! Despite everything they had promised about its capabilities, it just will not work in conjunction with Cubase.

Mmm, don’t know if this would work (as a last ditch attempt) but can you ROUTE the AUDIO from Cubase somewhere else (rather than to the C12+ soundcard ?? So ROUTE it to the PC instead. But the only way to do this is to make the setting WITHIN Cubase. I looked under DEVICES (Set-up / VST Audio) but all I found was a choice of Drivers to select.

Hope this makes sense guys. I really promise I have tried everything else.

The selected ASIO driver determines which outputs Cubase can use. If you want to use another output than the CI2 then you need to select a different driver.

Exactly !! lol Everything seems to be a ‘catch 22’ situation.

One of my friends recommended this to me (the way HE makes videos), but I wondered what you thought of this suggestion please ?? I am not quite sure how this would work with Cubase and if the external device he refers to would be expensive ??

I know I’m biased but I’d be very tempted to record your audio separately. i.e. get an external sound recorder and connect it to the line outputs from Cubase. The money you’ve been mentioning for software could get you some decent hardware - which will also be guaranteed to work forever regardless of Windows updates!

That’ll give you excellent audio quality for capturing your soft-synths. You could use a simple 2-channel (stereo) recorder with Cubase/Soft-synths on one channel and a mic (+preamp) on the other, or better still get a small mixer or a recorder with one built in. This would also enable recording line-level signals from your real gear - Moog, DX, Nord etc.

When the recording are finished, you’d then mix the audio and Camstudio video using the video editor as discussed before.

Has anyone heard of or used OBS before for scree-capturing etc:-

OBS (Open Broadcaster Software) is free and open source software for video recording and live streaming. Stream to Twitch, YouTube and many other providers or record your own videos with high quality H264 / AAC encoding.

It was recommended to me tonight by a fellow Steinberg forum member.

I am still on the Camtasia ‘trial’ at the moment.

I wondered if anyone uses a (hardware) video camcorder (for filming podcasts [or taking on family holidays!]) which has an AUDIO INPUT (probably a mini-jack I would guess)? So that I could plug in (say) a microphone (for narration) and a synth (jack out) into a mixing desk, and then come out of the mixing desk (maybe thru the AUX or LINE OUT) directly into the video recorder. Or perhaps a better method might be to run the synth and mic into Cubase (via CI2+ Interface INPUT’s) and then from the CI2+ OUTPUT’s into the video recorder (i assume via a 2 x 1/4" jack running into a single mini-jack lead).

In any case, it is a camcorder with an AUDIO IN which I need to source in the first instance please? I can only seem to find models with a built in CONDENSER MIC?

This one says (in the SPECS / CONNECTIONS) that it it has MIC and OUTPUT :-

This SONY model is termed as an action camera (whatever that is!?). As I say, I am very grey in this area of AV.

Otherwise, one guy I know, he records his video (with the camcorder condenser mic turned OFF [so like a silent movie]), and has his instrument (guitar [or whatever] and his mic [for narrating]) into one of these :-

Then he IMPORTS the VIDEO and MP3/Wav into (something like) ‘Windows Movie Maker’ and SYNC’s up the sound and picture files (which may only just need the beginning snipped off at the start on one of them [assuming that you did the whole video in one pass]).

He also said this is a very good method because if you F### up the audio in a particular spot (but the video was perfect), then you can just re-record the narration/playing again and insert it into the ‘Windows Movie Maker’ (ie. you have separate files for Audio and Visual!).

I spoke to CANON TECH SUPPORT about their camcorder range. But their assistant gave me duff information and incorrect 'links, and so (unless they reply with amended details) I will be looking elsewhere (Currys/PC World).

I know this thread is quite old but I searched for the same question and ended up here. Screen Capturing Cubase (and any ASIO software) can be achieved quite easily.

I have made a tutorial on how to do this here: 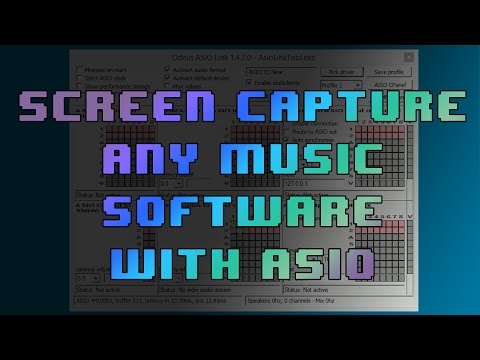 That is very clever indeed how you managed to work that all out and get it going! Thanks. As I can see, you agree that the main issue here is that of SYSTEM SOUND. You did very well to get this far with it.

What do you actually intend to do with it all now that you have got it up and running please? Are you going to make some more tutorials on it yourself? That would be helpful.

And will you also be using a VIDEO CAMERA of yourself talking?