I have 8 bars of live drums (stereo track), and i’m using Audiowarp > Free Warp to slightly correct some timing discrepencies.

Because i’m going for a very live feel, I’m not using bar lines, i’m ignoring any grid and i’m simply moving a few beats by ear.

Ok, I’ve gone through it and put in about 10 warp markers.

So what i need to do is move the snare, and all the audio after it in time will move by the same amount, including any other warp markers that come after it.

Obviously if i had fixed this as i was going through it the first time, it wouldn’t have been a problem, but once you have later warp markers, it gets tricky, and i can’t work out how to have everything later also move by the same amount of time …

Thanks, hopefully, in advance!

Just a little bumpizzle on this one, anyone got any ideas? …

This must be possible.

Please see the video linked below, what you see here is what i need to do!

So, when i time stretch a segment, the later segments don’t get stretched. 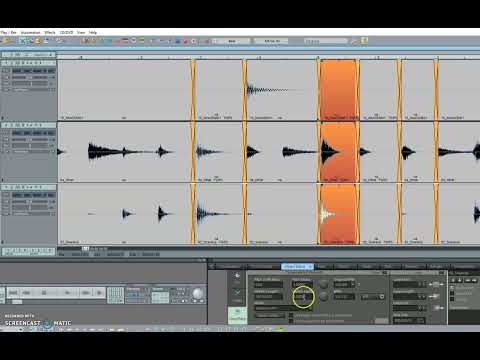 A marker is an independent point. So if you want to move the following timings with free warp, you work from the start and don’t add warp markers.

So for example, I am strumming on my guitar and another instrument pulls me off time and then a bit later I pick up the click track again, so I have 4 bars where I am early.

I put in a marker at the last point it is on time to fix that point, and another at the point after the problem section to fix that point. Then on the first bar that I want to correct, I put a marker on and move it which moves everything else between the markers. With luck, that puts everything in the right place, but I may have to work my way down each bar as it pro-ratas the movement across the time .

Once a marker is set it stays put. So if you want to move a whole section then don’t put markers in it.