I’ll try to track this down later. This is a brand new take on what I have suspected to be a problem for a while - sometimes when editing automation parameters won’t follow correctly or logically. This however is very different from what I’ve seen before: 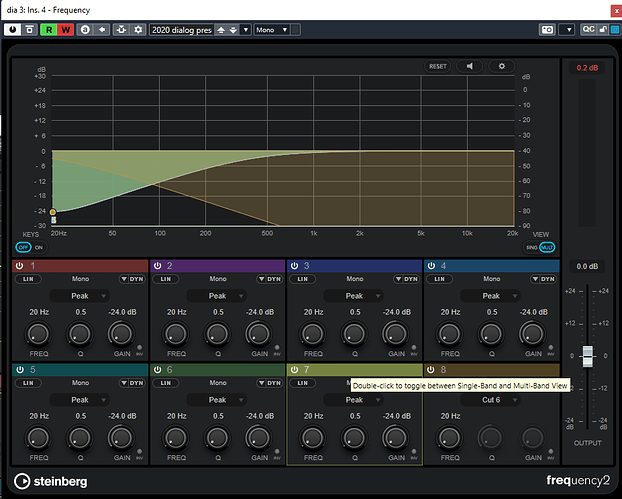 Each instance of Frequency has a default dialog preset applied in my templates where all parameters of that preset have been written as automation, so the default behavior when I open a new project using a template is that if I grab any of the parameters and move it the parameter will snap back to the preset levels when I release, because of the automation. And the preset has gain all at unity, with frequency and Q set normally, spread out over the range.

If you look at the values you can see that all of them are as low as is possible, with band 8 also turned off. Obviously this is not a setting I would ever get to in normal operation. Instead I’ve now seen this twice in one project as a result of only moving an event from one track to another. The automation seems to be written in and I can’t even undo it.

It should also be obvious how dangerous this bug is. If I get a note to change something at only one place on the timeline it is possible that an events track change could cause it get those settings, and if I don’t play back over that spot I won’t know since there are no visual indicators that something changed without opening the plugin.

This is really worrisome.

Has anyone seen this???

I’ve seen similar things happen with on/off or bypass automation as well as with sends.