AXR4U with ProTools, does anyone have experience?

I’m thinking about buying an AXR4U, WIndows 11 environment but I’m using Pro Tools and not Cubase, so will it work well if anyone has experience?

It should work without problems - it’s just a USB interface after all. But it’s main selling point is it’s integration with Cubase. If I was using another DAW I’d definitely consider something else. For Pro Tools, either the Pro Tools Carbon if you can afford it, or else the RME Fireface UFX II.

RME has a very good reputation and even though RME explained very clearly why it still uses USB2 connection, I personally like it to be USB3 when I buy a new interface. The RME Fireface UCX II has even some improvements compared to the UFX II, but it is a portable variant and I heard somewhere that it is too hot in terms of temperature, which is not good for electrolytic capacitors, but RME must have installed capacitors that are declared for a higher temperature. According to some who compared these devices on the “gearspace” forum, RME has worse ADDA converters than AXR4, and it seems to me that looking at the pictures with printed circuit boards, AKM AD converters are one generation younger than RME’s, but I can’t say that reliably based on some photos. There were also stories on the forums that the AXR4 preamplifiers sound nicer than the RME, although I personally like the sterility of the RME sound because I will get it “nicer” with my skill and taste.

USB3 is faster than USB2, but it’s completely unnessary for audio work. Watch this video for a great explanation of it… 3 Reasons Why I’m Switching Back To USB | Thunderbolt vs USB Audio Interfaces - YouTube

RME’s drivers are the best in the industry. I haven’t heard anything about temperature problems with the UFX II. Certainly none of the reviews I’ve read have mentioned it, and even if it does get a bit hot then just leave a space above and below it - problem solved. On that note, the manual of the AXR4U INSISTS you leave a space above and below it. It says it will likely have heating issues if you don’t. So if one of these interfaces is going to have heating problems, it’s far more likely to be the AXR4U, not the UFX II. I keep a space above and below my AXR4U for this reason. You’ll notice in the official product shots Steinberg do the same… 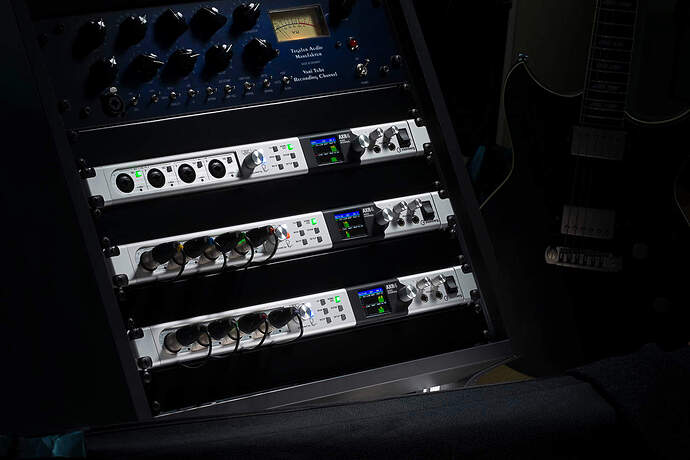 Both interface’s converters are fantastic. I’ve used both and never noticed any difference. I wouldn’t worry too much about converter generations - so much more influeces how interfaces sound, as demonstrated by different interfaces that all share the same model and generation of converters. I think the quality of converters have gotten so good in the last 5 years that any medium-priced modern interface has fantastic converter quality. We’re just splitting hairs at this stage - long past the point we were from the 2000 - 2010 years, where there were often drastic differences indeed.

AXR4 preamps are extremely sterile - I don’t know where you got the impression they weren’t? They only start to get more coloured if you enable the RND Silk saturation and dial it up high.

You can’t go wrong with either interface in terms of sound quality. If you were using Cubase I’d undoubtedly recommend the AXR4U, coz it’s integration makes for a great workflow experience. But if using Pro Tools I’d more strongly recommend an RME interface, because the drivers will be rock solid, the latency will likely be lower than the AXR4, and the RME interface will likely be supported for far longer than the AXR4U. Steinberg have already stopped manufacturing the AXR4T, and updates to the AXR4’s DSPmixFX software have been few and far between, with them ignoring several of users’ biggest requests - such as fixing Loopback support (it doesn’t work on Windows), and adding the DSP guitar plugins from the UR series’ version of DSPMixFX.

Thanks for the effort to explain.
I watched the video from the link, I know about it and a lot of explanations from RME himself on that topic, but I prefer my future interface to be USB3 connection.
I know about the famous RME drivers that they are the best in the industry.
Regarding possible temperature problems, I was not thinking of UFX II, but of UCX II because it is a portable case - small form factor. I don’t have it focused, but someone mentioned it somewhere, and there is a logic for it to be so. Of course, RME must have taken all that into account.
I also know that the AXR4 manual requires that there be space above and below it just because of heating.
I’m glad to hear that AXR4 preamps are extremely sterile, I’ve only heard that for RME.
For half a year now I have been torn between AXR4 and RME UCX II or UFX II and I was just close to AXR4 when I now read from you that in terms of latency RME has lower latency and that RME is generally known to have better technical support that, as a rule, will last a very long time.

I did not know that Steinberg have already stopped manufacturing the AXR4T. I assume and AXR4U too.

AXR4 and RME were shortlisted for me because of the possibility of AES connection with my Fractal Axe FX III due to the ASIO limitation to only one interface in the Windows environment in particular and I need both when I want to do Re-amp guitar.

I also heard that AXR4’s DSPmixFX Loopback does not work in a Windows environment.
I assume that, knowing all this, you still use AXR4 because you work with Cubase.

I’m thinking of switching to Cubase as well, but I’m used to Pro Tools. There is no shortage of dilemmas and time is short…
Thanks again for these explanations.

The AXR4U is still being manufactured/distrubuted and seems to have been the more successful of the two units, so hopefully it will remain supported for some time.

Yes, I’m a Cubase user. Used to be a Pro Tools HD user, but switched to Cubase several years ago and never looked back. It’s superior MIDI capabilities, Control Room, Expression Maps, VariAudio, and numerous other features mean I don’t miss Pro Tools at all. It’s a deeper DAW than Pro Tools - and that has pros and cons - but I don’t regret my decision.

Thanks a lot for the explanations.
What would be the final advice: RME Fireface UFX II or RME Fireface UCX II or Steinberg AXR4U? As far as I understand, AXR4U can be used with both Pro Tools and Cubase if I switch to it.

Any of those devices can be used with any DAW. If you’re definitely going to stick with Pro Tools then I’d suggest either of the RME devices, depending on your needs. But if you think you’ll likely switch to Cubase eventually, then pick the AXR4U. Have you tried the Cubase trial yet? I’d suggest these tutorials series as a good starting point:

Intro To Cubase: The Basics

These tutorials are a longer/deeper dives into the basics

And an AXR4 tutorial series.

No, I haven’t tried Cubase.
You have tried everything that I am interested in and had devices physically, and I only read about it. I wanted, based on the experience of someone who has tried it all, to decide which interface to buy and which has the possibility of AES connection.
I don’t have much time for experimentation because I have a regular job that takes away my time for music.
Thank you for your efforts to help.

The 30-day Cubase trial should be more than enough to get you familiar with it. If after that you like it, go for the AXR4U. If you still prefer Pro Tools, get the Fireface UFX II.

On a side note - unless you’re doing live performances - I’m not sure the Fractal Axe FX III is really pushing the envelope anymore, when we have great tools like Amplitube 5, Tonex, and Positive Grid’s BIAS Fx. I find the sounds I can get from either of those 3 are fantastic. The limitless options and tweakability are constantly stirring my imagination.

For me, Fractal Axe FX III is a very powerful machine with endless tweaking possibilities, and at least for the guitar I don’t burden the system processor with plugins.
Thanks a lot. I appreciate it.