A couple of bugs maybe?

First, any apostrophes I’m typing in appear to come out backwards as in this example. If it helps, I’m using an Apple USB keyboard (British Layout). 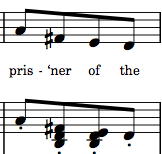 Second, is the position of the rest OK in this example? The score I’m copying from has both of the upper stave rests at the same height. Obviously, the rests belong to different voices. 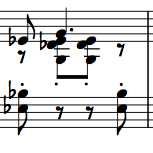 Dorico automatically smartens quotes in lyrics, but unfortunately one of the common limitations of the algorithms used to smarten quotes is that abbreviations that miss out the starts of words, like 'twas, are very difficult for the computer to discern from the beginning of some reported speech (and yes, lyrics do sometimes include reported speech, so we can’t simply assume that a single quote should always be rendered as a right single quote).

As for the rest, Dorico only aligns rests within the same voice and within the same beat group. If you would like to move the rest vertically, select it and use the rest position property in the Properties panel.

Thanks Daniel - appreciated, as always.

The apostrophe issue isn’t just related to the start of words; there are any number of examples of 30’s / 40’s lyricists who regularly shortened words by missing out a syllable - every to ev’ry being a perennial example. That said it’s good to know there is a fix although maybe in time changing the priority from speech to abbreviations could be included within the options. Personally I can’t recall an instance where I’ve used quotes within the lyric line - often as dialogue but, as the convention of vocal scores seems to dictate, I place that above, not below, the staff.

Any info on the frames question?

You should find that “ev’ry” is rendered correctly, because the rule for “ev’ry” is the same as a standard possessive like “the cat’s whiskers”.

You can position music and text frames on top of each other, sure, but the music won’t avoid anything in the text frame.

Nope - still getting a backwards apostrophe.

Presumably that’s because the apostrophe starts a divided lyric syllable and is therefore treated the same as the start of a new word by the smart-quote routine.

Yes, absolutely right, Derrek. If you put a single quote at the start of a lyric, it will always end up as an opening quote, not a closing one.

Yes, absolutely right, Derrek. If you put a single quote at the start of a lyric, it will always end up as an opening quote, not a closing one.

Sure, but I think Derrek’s point (and mine) is that if you put a single quote (personally I’d call it an apostrophe) in the middle of a word, it’s being treated as if it were an opening quote. Which it clearly isn’t and would never be - AFAIK, other than abbreviations (which use regular apostrophes) there are no words that have single quotes halfway through them…

I think it’s great that Dorico implements shaped apostrophes. Sibelius completely ducks this issue and irrespective of the font gives you a teardrop-shaped vertical slash. This is obviously a better approach. Hunting through a few scores and books last night I did find one example of a quotation in the lyric line (Cleopatterer by Jerome Kern and P.G. Wodehouse) and in that instance they used double quotes (as in They’d murmur “Oh, you kid!”). Just my 2p but personally I think using double quotes for quotations is 100% the correct approach. Where quotations are concerned, the only reason for using single quotes is in that rare case when you’re quoting something within a quotation.

Could the algorithm be tweaked in such a way that where an apostrophe follows a hyphen, it’s a forwards apostrophe rather than a backwards one? That would eliminate a few of the cases of manual intervention.

While we’re on the subject of lyrics (he said, hijacking the thread) I’ll add a feature request:
Sib’s import text to lyrics feature is handy (where words are automatically split into syllables and applied to a vocal part). Finale’s lyrics tool can’t do that bit, but can do something better - if a single line of text is applied to multiple staves, or in multiple instances then one tweak can be made to the text that is then applied to all cases in one go.
You’re probably already nearly there with something even better, right?

The lyric hyphen isn’t really there, Leo, so unfortunately trying to make a rule that a single quote following a hyphen should be a closing quote is not possible: we still can’t tell the difference between that and the start of some reported speech.

Under the hood, lyrics can be shared between different instruments, but there’s no way of achieving this via the user interface just yet. This would allow you to correct a typo in one instrument and have that same fix automatically appear in the other instruments too.