Bar numbers alignment below the staff

Hi All,
I thought I’d ask if what I’m after is at all possible. In film music, there is this convention of placing bar numbers below the staff at every barline. Regardless of the consideration that it is quite improper, it still is kind of a standard by now. So my question is, is there a way to obtain the result in Image 1 using automatic settings? I did that by overriding Y position for each bar number. Dorico automatically comes up with Image 2, or, if I select “align barlines for the system”, Image 3, both space-consuming for high ledger-line counts. Even an option to disable collision avoidance for bar numbers would do it, but there doesn’t seem to be such an option for bar numbers in the Engrave mode properties panel.
Thanks!

At present, no, there’s not a way to achieve this automatically. I’m also hopeful for this functionality in the future, since one of my publishers requires it (albeit above the staff, nestled as close as possible).

And as you may read in a thread very close to this one, at the moment, bar number offsets sometimes are not displaying correctly in the score in 3.0.

I mostly write contemporary classical music (instead of film music) but write film music often enough. I hadn’t tried this until now. This is really a deal-breaker issue when it comes to commercial-style (ex. film music) parts. There are no manual adjustments for locations of bar numbers apparently, I cannot move them whatsoever. It becomes essentially impossible to use Dorico for commercial parts until such a feature is available.

At the moment this doesn’t directly affect me, but I am now dreading that if I get commerical work that I may have to go back into Sibelius (or Finale) (ugh) to engrave commercial-style parts simply because of this limitation, even though in all other regards Dorico is so much better and makes everything much easier.

You can move bar numbers using the ‘Bar number offset’ properties, or by nudging them with Alt+arrows. There is a bug in Dorico 3.0 that prevents some of the bar numbers you can select from moving when you nudge them, but the workaround recently discovered by somebody (I forget who, I’m sorry) is to hide and show them again using the ‘Hide bar number’ property, which causes them to reappear in the adjusted place. This bug will, of course, be fixed as soon as possible.

Here’s Leo’s video I was talking about : 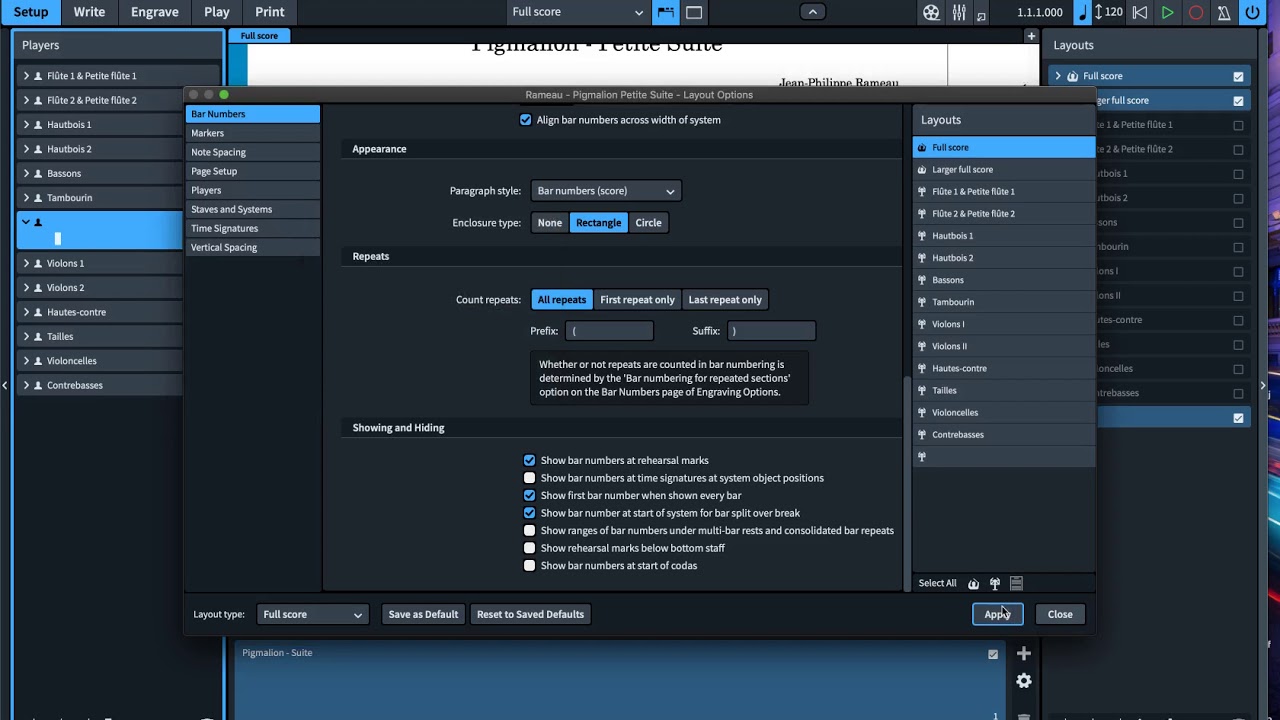 And I add a picture of the FB comments.

I’m kindof confused about that tutorial actually. First of all, that is for the score and not the parts. (Daniel’s explanation helped clarify the issue in the parts). However I can get large boxed bar numbers at the bottom of the score every bar, and that works great in Dorico. I watched the pianoleo tutorial and what I was puzzled by is why go through so much trouble to get staff lines behind the bar numbers? Usually the boxes are just floating, and you can do that with built in functions without having to do all of that crazy stuff.

Somebody specifically asked for how to put bar numbers on their own stave. Apparently some film/tv conductors prefer this.

This bug will, of course, be fixed as soon as possible.

Thanks - after a bit of fiddling, now I understand how to get them to move. It would be ideal if I could get a result closer to marcovalerio1’s “image 1” without having to do anything. I try removing the “spacing around object” settings and still can’t coax them to move within the slur automatically.

Somebody specifically asked for how to put bar numbers on their own stave. Apparently some film/tv conductors prefer this.

This is the sort of thing I typically see:

barnumbers.PNG861×250 11.5 KB
Most often at the bottom of the score, although some composers seem to prefer it on top or above the strings or in other places.

Either way you can do that built-in with Dorico in a way that skips most of those steps.

Is it possible the question was misunderstood? Maybe the person actually wanted that instead of wanting a stave. Often it is a problem in tech support that people state their problem and conflate their proposed solution into the problem instead of actually stating the problem. Writing numbers on a blank stave was quite common in handwritten film music because the score paper was filled with staves, leading to no good place to write the large bar numbers except on a staff. I personally don’t see any good reason for that practice with digital engraving.

That tutorial almost makes it seem (to a newcomer to the product) like that is the only way to do large bar numbers in film score style in Dorico, and in fact that is a very convoluted way that you would only use if you badly needed blank staff lines behind it for some reason.

mducharme, FWIW there are tutorials for “studio-style” bar numbers for Sibelius and Finale at the Scoring Notes website (as linked). I note that these use single-line staves rather than five-line staves, but either way, there appears to be a need for such functionality in some genres (music for media, apparently).

It is not possible that the person was misunderstood. This was the example they gave:

I don’t think it really gets clearer than that…

OK, understood - FWIW, I’ve done a bit of music for media and looked at enough scores that I think that practice is much, much less common in music for media than simply having freely floating large bar numbers not affixed to a staff. Even then, I feel it is likely the case that people are not so iconoclastic about that that they would prefer to go through those extra steps rather than live with floating bar numbers. If you need so many steps to get X then people new to Dorico might think “oh, it is so complicated to get X, that shows poor design, I don’t want to switch” when it is super easy to get “almost X”.

Hi all thanks for the great feedback and sorry for the slow reply from here! The proposed solution is great for the score, although I don’t really have a problem in the score. My issue is with parts. the second staff solution would necessitate custom part layout for every player including the extra staff and the player itself, which is a bit overcomplicated. @Daniel: the offset is indeed what I’m currently using, not terribly bad, except in the perspective of a scenario where you have to offset each bar number for each part in a 40-cue, 25-part film score. An option to override collision avoidance for bar numbers in the future would be a great addition, although I totally understand that we are talking about a specific niche of users and it cannot be high-priority

Thanks for the feedback, Marco. I agree it would of course be preferable to be able to produce this kind of result by default, or at least much, much more easily. It’s on the list!

Hi again! I thought I’d revive this now that we are in the 3.5 cycle, and some important and exciting additions have been made for Film Scores. And just because now we can, following screenshots are created using the brand new Slices!!

Again, attached is the typical appearance of a Tuba part when using bar numbers below staff. At least in the case of Slice 2, numbers could easily be between the staff and the tie without collisions occurring.
This, combined with the inability of performing a normal drag and drop on bar numbers, can make the preparation of a part for below-staff-heavy instruments like Tuba, Double Bass and potentially all the clarinets, significantly time consuming.
On the other hand, enabling “align across the system” will align to the lowest number, resulting in situations like Slice 3.
I’m afraid I’m still advocating for at least an option to disable collision avoidance for bar numbers, plus the ability to drag them. Thoughts?
Slice 3.tiff (38.9 KB)
Slice 1.tiff (28.8 KB)
Slice 2.tiff (15.4 KB)

Daniel did say it is on the list, so I imagine it is coming. I would like to see a solution for this too.

Don’t use TIFF format for slices, Marco. Nobody can view those directly in their browser. PNG format would be more helpful.