Probably an overly ambitious script. But perhaps useful to someone

There are five pages. Two control functions on a single channel, two control banks of eight channels (useful when mixing or laying down lots of backing vocals). And one almost empty for customization.

Functions that are the same on all pages

Functions that are the same on the two single channel pages 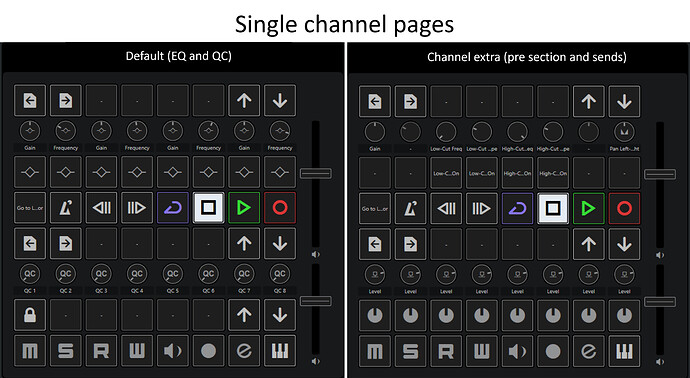 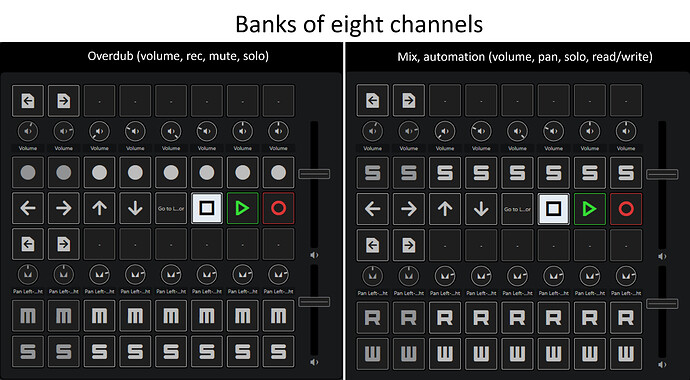 Hi, do you think that should be possible to adapt your (great) script to an X-Touch regular (not mini or ONE) ? In Midi-remote I tried to loading your script with my X-Touch “regular” switched on , but the script remain ‘disable’ and no connection with my device! The goal for me is checking how you did it , and adapt it. For ie in my first test (building my own script) my n.8 Volume-faders doesn’t work (I saw that in your layout , the icon are not “faders” but “knobs”). Thx in advance for your answers ! /Massimo

I don’t own the regular X-touch so there’s no dead easy way for me to do it. I guess it’s possible to edit code so that it identifies your specific model if we knew the exact name it reports over the USB driver. But that feels like a bit hit and miss.

I can upload the json code separately for you but I don’t think it would help much. Sorry.

I have practice with the code, but I think like you , and probably having the json code would probably not help me much in developing the right code for my device. Anyway thanks !

I dont think this is possible because when you download a script you can only open it ifyou have the associated controller connected. I tried to open various scripts so I could adapt but was not possible. I am thinking this may get a fix in a future release.

Switching the XTouch to MCU mode will make the knobs move more smoothly.
The knob must be set to relative mode on Remote Control GUI Editor.

Hi Torbjorn_Hedberg. This sounds really useful, I have a Behringer X-Touch Mini and I have Cubase, soon ver 12. I would like to try this out, but I have no idea where to start in how to use your script? How do I implement/run this? Beginners steps will be helpful.

I purchased the X-Touch Mini for photography believe it or not. I use it to control Capture One raw editor. I found a script online which uses Bome Translator Pro software to translate the MIDI controls into menu actions so I can edit photos.

This script is in progress, now.

Hi bro
I wonder that it can use next page of focus qc.
It can be?
Thanks

Sorry, but I don’t understand your question.