Can anyone tell me if the X Touch works well with Cubase 12? I am wanting something more interactive than the Nektar P 1.

Yes. I’ve been using the X touch together with an Extender for several years now. Works great.

Would strongly recommend reading through the Steinberg Remote Control Devices document once you get the X touch since the Behringer documentation is non-existent.

Thanks for the positive reply. Did you have to create a script of your own? Perhaps it was simpler than that. Is it easy to get to grips with the SRCD document?

I ended up with a Faderport after my CC121 died. It’s fantastic, and there’s a brilliant script here on the forum. with a look.

No, did not need to create any script. Just make sure you set it up in Mackie Control mode.

What really helped was getting the Overlay for Cubase that Jan Diertens makes and then assigned some functions and shortcuts to assignable keys. Great for switching mixer configurations.

Thanks very much. That is useful to know. The X Touch may be old but it still is good?

How is the capability to control VSTs? Does it work out of the box?

Lots of twiddling…it does work out of the box. But I needed the Remote Devices document to figure it out. How often do I use the XTouch to control VST parameters? Not very often. Reaching for the mouse is still (for me) faster most of the time.

What I do use for extensively is automation: faders, mute, solo, record enable. Also the transport section and switching mixer configurations (to just Groups, Guitars, Vox…or All, for example), plus controlling some Control Room functions with a press of a button (switch to Monitor B, switch to headphones and so on).

I’m on CB 11 Pro but the XTouch has worked like a charm for me. There are assignment buttons on the top that will let it control tracks, surround, eq, sends, plugins and instruments. I too have the Jan Diertens overlay which presents great with the Mackie protocol. It’s magnetic so you can use or remove it promptly. Looks great too.

If anyone needs any XTouch documentation, I have it in pdf.
Started to program my own button assignments and it worked great until I got to the variable knobs. Those wouldn’t take the programming so I went back to the Mackie protocol. Someone at Behringer said the XTouch compact had better programmability and that could be accomplished but it doesn’t have as elaborate of a transport system. He couldn’t tell me why the compact had more programmability than the mothership. (shrug)

To control the VST instruments is good.

The instrument’s VST controls are accessed.

Tip: if you activate Cubase 12’s new Quick Control system, you can also map them at will.

Tip 2: FLIP button to have the controls on the faders

Right! I have just bought the X Touch. But am encountering an issue that perhaps someone might clify for me. The X Touch won’t view the first 4 mixer channels. It seems to get stuck with my Channel outs from Superior Drummer. X Touch does not recognise the first four channels. Also If Superior Drummer Channel is Highlighted when I change the fader bank It activates the snare drum. Obviously some midi conflict. It will see the SD channel if there is only one, but when it has multiple outs it gets confused

Any ideas how to resolve this?

I can just say that I use EZ Drummer (and now EZD3) and I activate the multiple outputs and they all show up and are available on the XTouch. It may be helpful if you could include some screenshots of your project window (with the Drummer tracks expanded showing both any midi and audio tracks) and also screenshots of the mixer window for those tracks.

Thank you very much for your reply, it is much appreciated. I will try to get the screen shots tomorrow. Two things stand out for me. Firstly the lines at the bottom of the mixer that shows us the X Touch selection is sometimes 8 channels and sometimes 16. Secondly when a midi instrument is selected the the change of banks also triggers midi notes. There is also often a channel on the extreme end that is not visible. All these channels are visible in Cubase. I take it you are using Cubase 12.

About the triggering of midi notes, have you ensured that (In ‘All MIDI Inputs’) is unticked for your controller in the MIDI port setup? Here’s what I have. 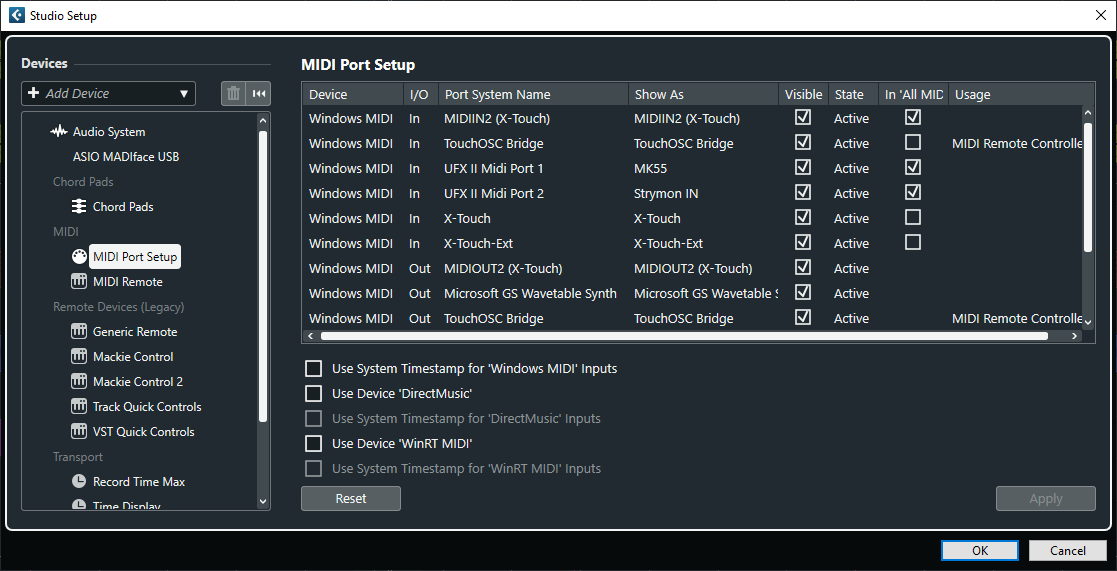 Hey! Thank you. I am out this morning. However, I have noticed something different already, namely that I do not have the X-Touch-Ext available. I also don’t have the MIDIOUT2 (X-Touch). Could that be significant? Might this explain why the X Touch is triggering midi notes? Do I need to connect by midi as well?
I am running 1.0.21 as I have not been able to find out how to apply the latest version. Thanks again for the help.

Ignore the X-Touch Ext. That’s the X-touch Extender which I believe you do not have. Then there is the midi from the Xtouch to cubase (Midi IN2) and back out to the XTouch(Midi OUT2). 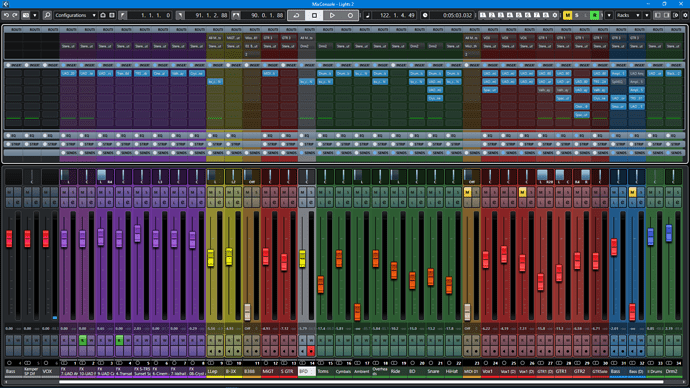 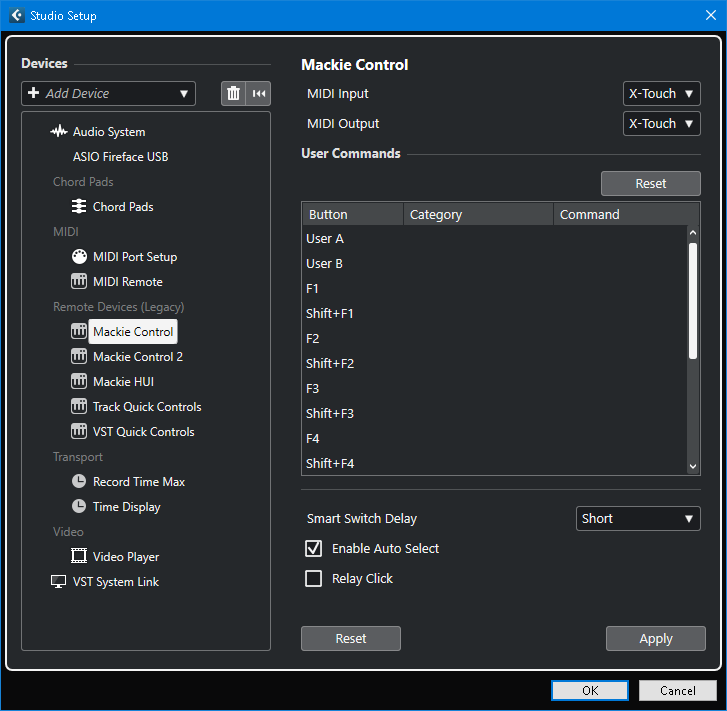 The only two selections available are X-Touch and MIDIIN2 (X-Touch).

I have connected with MIDIIN2 (X-Touch) but it does not work. 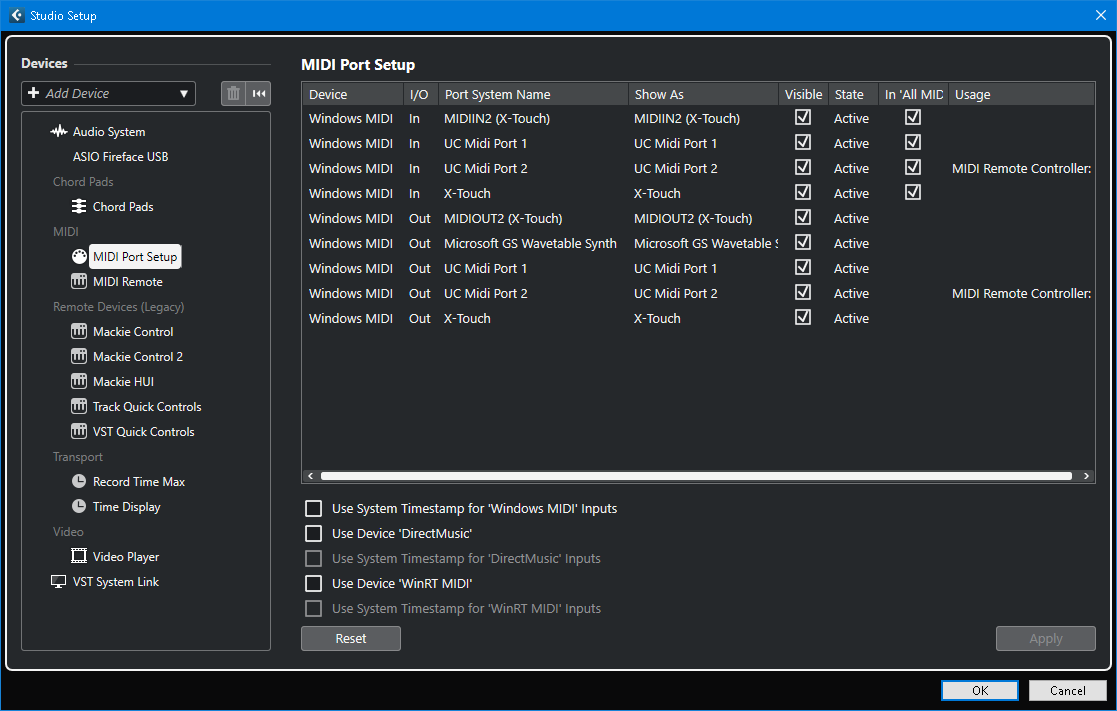 Thank you Zeid for your support and encouragement. I finally got things working properly. However I can’t say exactly how it happened. I turned off the all midi settings in the midi port window. I changed the MCU settings and the changed them back. I the turned off the X Touch and turned it back on and hey presto it was working properly. I closed the project and opened another and it was working. However later when I restarted the computer. I expect I I will see what happens today. Progress of a sort. I really did enjoy working with it and less use of the mouse. Working with hardware is much more pleasant and intuitive.