Best DAW but what an absolute headache for decades

Rant incoming. Cubase when it is actually running, is the best DAW for making music.

But holy moly, see trying to get there…it is the least robust software I have EVER used in my entire life. I don’t even know where to begin… it’s an absolute headache just getting the software to work. I must be cursed or something, because I can’t escape error after error after error and I have a very capable machine. Seems like days of my life have been spent just trying to get Cubase to boot up and work.

I’m just scratching my head constantly with this since the SX3 days going back 15 years. Stopped making music for ages because software just wouldn’t work properly.

Recently purchased Cubase 12 Artist after using Cubase 12 Pro trial. Even that was a total mess, they are listed as separate applications and after downloading Artist there was no…files in the directory to launch Artist… but it loaded using the Pro shortcut (thanks for making that clear)

Great! sucess…no, Now the Duplex drivers have vanished, literally just disappeared. Downloaded ASIO4all, they don’t recognise the headphones connections and instead load 8 imaginary non-functioning channels. Moved directory to another drive due to lack of space, has a meltdown on the “Stienberg Download Assistant” …(shouldn’t there be an option to transfer directory to another drive?) What’s more is I can’t even reinstall it in a new directory now as the directory name is “invalid”.

It’s absolutely, jaw-droppingly, mind bogglingly baffling how in 2023 there’s still basic issues getting things to run. How can such a competent, powerful bit of software be so utterly terrible at the same time.

Recently purchased Cubase 12 Artist after using Cubase 12 Pro trial. Even that was a total mess, they are listed as separate applications and after downloading Artist there was no…files in the directory to launch Artist… but it loaded using the Pro shortcut (thanks for making that clear)

Cubase Artist and Pro both have the same installer and content. Only the corresponding features are loaded or not depending on the activated licence. Since you already had it installed from the trial, you just had to activate your Artist license and launch it with the same shortcut without having to install anything else.

This has to do with your devices / drivers, not with Cubase. Some headphones are detected as surround devices and show 8 channels to Windows. Please open the Windows sound settings and/or your headphones driver, and fix it there.

You cannot move the actual Cubase installation directory. Doing so will mess it up. That’s the reason why you cannot choose the install directory when installing.

However what you can move is the content, and there’s a dedicated program for this, called Steinberg Library Manager, which is normally installed automatically when installing the Download Assistant. You need to use this specific tool and not to move them manually.

It’s like moving the Program Files folder to another drive. Who does this ? None of your programs would work anymore.

Sorry for your problems. The software definitely works because a lot of us make our living using it. That doesn’t mean you don’t have a problem, just know it’s great software.

My suggestion is for you to hire somebody who is fluent in Cubase, and pay them their hourly rate to come over to your place and help you get started. After that Steinberg tech support can keep helping you. When I started on Logic many years ago I did the exact same thing. Walked into the music store, and yelled out “anybody here familiar with Logic on Windows?” One guy spoke up, he came over for an hour, and all was well.

It’s absolutely, jaw-droppingly, mind bogglingly baffling how in 2023 there’s still basic issues getting things to run. How can such a competent, powerful bit of software be so utterly terrible at the same time.

I feel your pain , ive had the love hate relationship over the years with drive failures and headaches trying to achieve the setup that everyone else claimed to have but i hate to say it ,ive achieved the goal now for the last 6/7 years with a system that runs absolutely beautiful with Steinberg only software , i won’t even dare to try to add any other brand of Daw’s to this machine (apart from plugin’s ) and this has cured all my ill’s .
Total optimisation can take a looooong time to achieve , waiting for those little niggley breaks or glitches to appear and then nuke them one by one and then keep a report for the next time you may need to do another install .
Setting up Cubase is not for the faint hearted i give you that and it’s very very very system specific and this is why i always say go for what Steinberg recommend or what’s proven to work and follow the guidelines , if your using a general purpose Computer ,be prepared for some headaches due to the DPC of audio systems .
Believe me i’ve been where you are but at the moment C12 .0.50 is the most stable of all Cubase’s so far on this system .
It’s all frustrating trial and error ,but by christ is it worth it

It was rare to see on here but these days there are so many people running professional software like Cubase with horrible none professional onboard pc audio and usb headphones etc. 100% of those types of problems disappear with an audio interface.

Most programs need to be installed on the C drive. Cubase is no exception. The content can be easily moved with the library manager that comes with Cubase. It’s not a secret!

I’ve had a dedicated soundcard and that caused more problems in the past.

Absolutely. No other DAW does it for me since going back to SX3 days. I just really needed to vent because it’s always one thing after another with getting it to work.

Computers are such amazing devices, it is just when you switch them on and start using them that the trouble begins!

I am assuming Windows in this case ? A good practice is to check your Windows Logs, to troubleshoot underlaying problems.

Something worth investigating, thanks.

It seems to be working okay now, I just want to get making music!!

I am (he so happily self diagnoses) a pretty patient person, but computers can just cause me so much annoyance that I’m embarrassed by how intensely they bring out negative emotion. If I was a programmer I would probably break a lot of things

You prolly already know this, but in case you don’t:

BTW, I feel your pain because I go back with Cubase to 1998/1999 and it was NOTORIOUS back then for CONSTANT crashes. Even for years after that, really. I’m staying on 12.0.50 because it seems the most stable.

thanks so much. seems stable for now

I don’t get frustrated by a lot of things but cubase does it as I want to just make music.

Ableton uses a non-standard install directory (ProgramData). Changing it, for security reasons, to Program Files, doesn’t mess it up IME. Why can’t Cubase be installed elsewhere? Too many programs to list offer the choice of location during installation. Cubase 12 had stability issues until 12.0.5 - nothing to do with Windows as that wasn’t changed. My biggest problem was disappearing licences and lack of support (took months, literally, to get them re-instated). But, all good now. (Anyone know how to get 5/8 time??)

Ableton uses a non-standard install directory (ProgramData). Changing it, for security reasons, to Program Files, doesn’t mess it up IME. Why can’t Cubase be installed elsewhere?

I have Ableton Live Lite and Cubase, amongst other DAW related software, installed on a D drive, and they all run perfectly fine from my end.

It is quite possible to install Cubase on any drive you have in your system, but this needs to be defined with the initial install of Cubase. Subsequently, any updates to Cubase will also be installed to the user defined installation path. 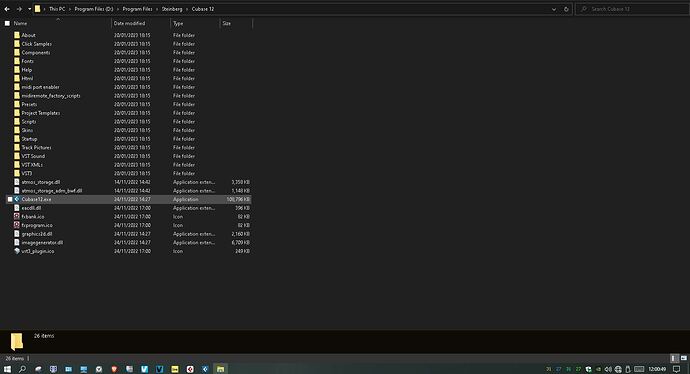 And this is what’s automatically installed the C program files. 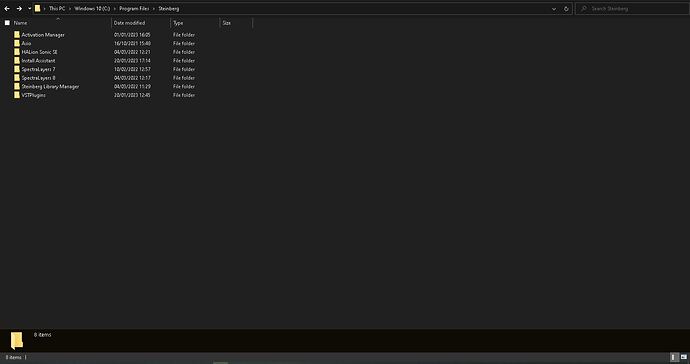 The folders’ you see on the C drive, are mainly the uninstallers’.

This is all on a Windows system, mind you.

Been with Cubase since 1992. Cubase 12 is the worst I have used. I have my task manager as a shortcut on my desktop and use it every day.

Is it the worst or is it because it’s more sophisticated and deep that it’s more libel to break ? Look at the new Lego Midi remote , it’s broken ALL of my controllers with encoders .

YES Steinberg mods and what not , It’s a child’s Lego tub with half the bricks missing !