This is a little difficult do describe, and I don’t know if it has been covered: I opened a musicXML file and copied the notes into another flow. It’s an 18-bar piano part, all quarter notes with a single voice in the treble and bass staves. Basically it’s a collection of material.

Not a terrible biggie, but maybe something to be aware of.

Thanks for the report. Are those notes in the same voice? Switch on View > Note Colors > Voice Colors to see which notes are in which voice.

I’ve checked the voices, and there’s only one per staff. (See the attached screenshot). 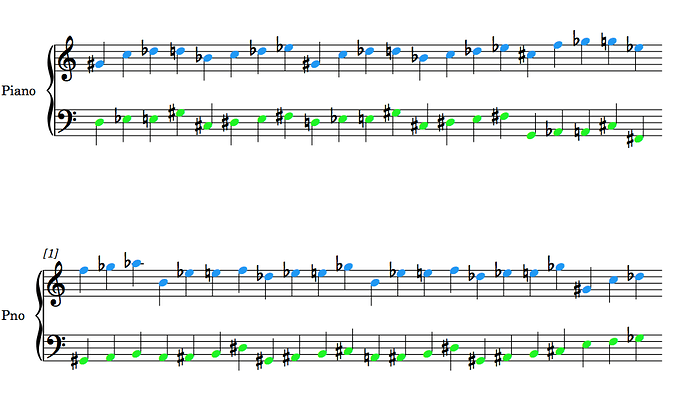 I’ve noticed the same problem with music which is in meter. When I’m in Write mode and I select a note and then press the right arrow key, I get a series of highlighted objects but with a twist. First, I have no clue as to what Dorico chooses to highlight and what to ignore, and second, at system breaks the highlighting jumps to another staff.

I believe the problem with the selection jumping to another staff has been fixed since 1.0.10, so that should not trouble you once the next update is available.

Arrow key navigation is not intended to jump only from one note to the next, but rather to navigate graphically through all items so that you can select anything in the project without needing the mouse.