I am sure that there has to be a simple answer to this, because I have edited tempo tracks before using the pen tool and clicking dots, followed by moving them around to where I would like the tempo to change.

A little background first:
I use another audio editor on my Mac Pro desktop computer (10.13.6) (I always start with creating the midi in Cubase 8.5 then export the midi to record in PT). With that said, I wanted to move my songs to my Macbook Pro (10.10.5), so that I could be mobile with my music.

That is what I am trying to do, I just would like to add a point at 144 at the 46 measure using the pen tool in the Tempo editor, so that the song changes from 120 to 144 during the solo section of the song, followed by returning the tempo back to 120 by clicking a second time at measure 96.

I click and click, yet no points appear in the tempo track section. It is, as if, the edit tempo track is disabled. I have saved, quit and reopened the program, but there is no ability to change the tempo and no ability click a point. I can change the overall tempo from using the top of the Tempo editor current tempo menu, but I cannot click a point using the pen tool.

I have had the same issue. Following for updates!

Figured it out. In the Transport panel, there is a Tempo section and it was set to “fixed.” When I clicked on the word “Tempo” it changed to “Track,” which allowed me to insert points on the Tempo track 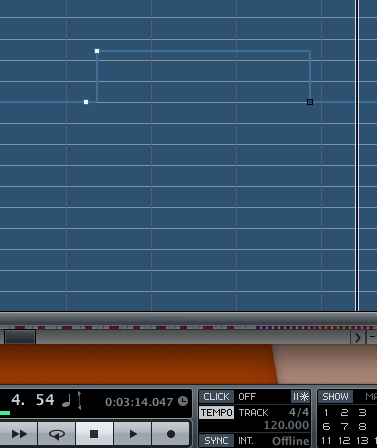 Have a good one

Thank you so much for this help! Really saved me a lot of hours and I appreciate the forum!