Cannot "OK" or "Export Warnings" after plugin scan. Window will not close

Hope I can find some help.

Trying to open up certain files, my system is getting stuck after scanning all the plugins and finding plugins that are no longer on my system.

In this case “Verb suite classics from Slate digital”.

I’m not sure if the plugin is truly the issue though. As we all probably know, once the plugins are scanned, a window will open which will allow us to either click “OK” or “Export warnings”.
These buttons are NOT working allowing me to click through. I cannot hit either of them. The Window just hangs there.

What is more frustrating is that if I play my MIDI keyboard, I can actually hear one of my MIDI synths playing, so it is not truly a crash. It’s waiting in the background ready for me to work, but I cannot exit out of this window.

Does anyone have any ideas?

I am currently running the latest version of Windows 10 in 64 bit mode. Processor is an i7 2600 K. (Still runs great). Currently not overclocked. 32 gig of RAM installed.

Thank you in advance!

There is probably another window somewhere waiting for input first. Could be Kontakt (that does it sometimes). It can be difficult to get an unseen window to the front. There is an app for it can’r remember the exact name something like force window visible. Sometimes you can see it in the taskbar when you hoover over cubase icon.
Hope you can fix it!
ALso next time wait a few seconds before you try to click it.

I was thinking that also. It’s logical. I was able to find the function in the task bar to view all open windows.

Unfortunately but no dice. Thanks though.

In some similar hidden windows cases I’ve had work-around success by making one or more Cubase commands accessible from a midi remote controller (via MIDI Remote or the Generic Remote).

Specifically the commands “Confirm” and/or “Escape” found in the Focus section: 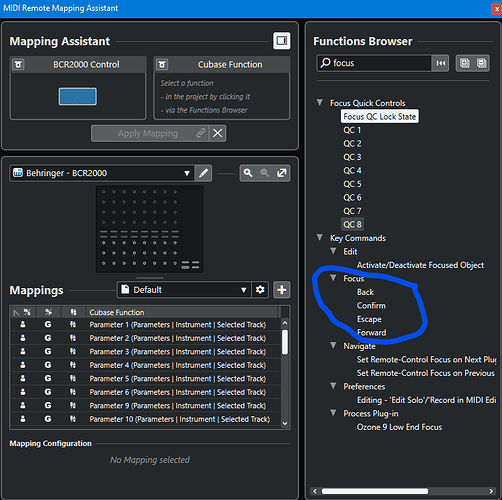 This is so clever!
Also did you try clicking on the cubase taskbar first, Maybe cubase just does not have the focus.

Thank you all. I determined it was a corrupt file after a crash. I opened a back up version and it was fine.

I immediately deleted the slate reverb plugin and it’s been smooth all night. (Knock on wood).

To be clear, it was not a hidden open window and Cubase not focused.

I recently tested the Slate All Access Pass for a month and was plagued with random similar licence issues - I contacted Slate to try and get some reassurance that the full licence wouldn’t have the same issues. When none was forthcoming I cancelled the trial and didn’t go forward with the subscription.

Mostly seemed to be the non-Slate plugins that are included that kicked up a fuss, but I wasn’t going to take a chance on buying into their universe if this was to be a ‘thing’.

I was actually on their subscription plan for about a year. Of course, they have some great plugins, but I really am trying to get away from subscription models. It’s just not worth it and I’m finding that I have enough great plugins to do everything I need to do.

I don’t want to bash Slate too much, but they have always had installation and licensing issues. They’ve had at least 3 different systems in the past (way before subscription “All access”)

It seemed they finally got it right when they started using iloK, but when this happened, the first thing I thought was, “oh, there goes slate and they’re licensing problems again”.

Now this one is a little odd because I no longer had this plugin installed but I opened an older file which had one of these reverbs on an insert.
So it had the exclamation points showing that it could not be loaded. No big deal. When opening this project, after scanning all VSTs, it would show in the list of plugins that are no longer installed. Again, no big deal.
Normally I would hit “OK” and move on to the project. That’s where I had the issues this time.

This is just for some clarity in case somebody winds up searching for this same issue in the future. It seemed to be unique to me though.