I have licensing issues that cannot be resolved. I’ve put in a ticket to support but I never hear back. Does anyone have a number for support? So far the experience has been pretty abysmal

The support number depends on where you live, so that is a minimum information you need to tell. Also you can find the support hotlines on the Steinberg website, like this 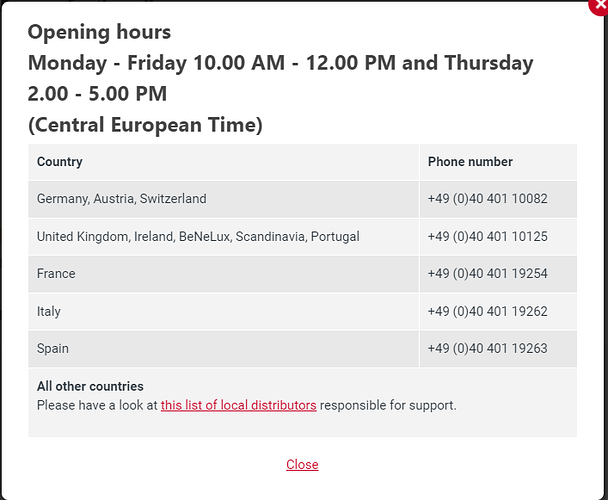 If you like you can post a couple of more information, like what Cubase release, what problem you have and ideally screenshots from the eLicenser Control Center and the Activation Manager and someone here in the forum might be able to help

Hi JuergenP , I’ve tried ringing their phone numbers but all them come back as invalid. I’ve emailed their support but I’m still not getting a response.

The Cubase release is LE 11. We have 16 licenses purchased and I have access to 11 but not the remaining five. The access codes don’t work for those remaining five as they claim to have already been used. They don’t appear in my registered e-license software either. Ideally I just want those four licenses ‘renewed’ so I can make use of them

Steinberg support is diabolical. It’s nothing new, been this way for many years. In my experience it’s about four to six weeks for a non-helpful answer.

Well, these are the official phone numbers from Steinberg. I just tried to call the german number and it rings (didn’t wait for someone to pickup). I don’t think they are invalid.

Did you call during the mentioned support hours, which are basically german time zone, so depending on where you are this might be a completely different time of the day.

Regarding the licenses that are “used” I can’t help, that is really a support issue. I have no more access as you have, sorry…

No matter which number a call from the UK it just comes back saying that ‘this number is for sale’. I’ve tried via different phone systems too so it’s not just the single one I’m using. Seems a little strange. Called during their opening hours when they should be open (checked time zone etc) and still get the same results.

Glad to see though that I’m not alone in finding their support very slow. It’s a shame as I’m fan of Cubase but finding any support for issues is very tiresome

That sounds like you dialed a wrong number, I remember this kind of message when I was in the UK and made some typos in dialing.

I never replied…oops! Thanks though, that did enable me to ring them