In WaveLab 11.1 (on Win10) when creating a DDP CD image I notice that the CD Text shown in the Montage’s ‘CD’ window is seemingly not carried across? It’s not a big issue but wondered if anyone has input. Screenshots below of the relevant CD window portion and then the DDP, opened in Steinberg DDP player 1.5
The CD Text is what was auto-filled by WaveLab btw, not entered by me. 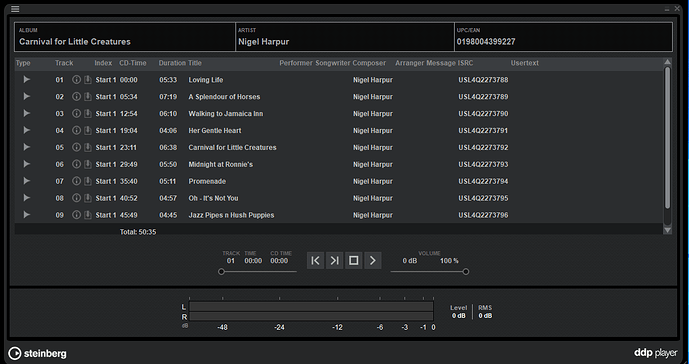 I don’t see what the issue is. The CD-Text in WaveLab appears to match perfectly what the DDP Player shows.

Maybe me being obscure, I was expecting to see something under ‘user text’ in the DDP window? Perhaps I have the wrong end of the proverbial?

I think you have to put in text into the “Comment” field in WaveLab then?

Thanks S-E, will run off another and see.
I ran out of deadline for submitting the DDP anyway and the CD Text issue was just something I noticed as I went along. It just seemed odd that the entries under the heading ‘CD Text’ in WaveLab didn’t appear in a field in the DDP.
All the other main fields populated fine, track titles and numbers and so on.
Thanks again.

But, it looks like it did…other than the artist being in the composer field rather than the performer field, which would be shown in the detailed CD-Text Editor (I think it’s Shift+T by default), rather than the summary in your screenshot.

I think you’re right JS and it’s me misunderstanding/getting confused - I think I didn’t realise that the CD Text window in CD tab of WaveLab was just displaying a summary (of sorts) and was thinking I would see exactly what was in there ‘abcd / efgh’ somewhere in on field in the DDP - I’ve always burnt physical master discs before this time. Still not sure where the DDP derives the ‘Artist’ from but in the CD Text editor I did put my name in all four ‘name’ fields in the album name header (none of which are actually called Artist.
I will tick this one as ‘solved’ I think! Many thanks to all for their patience

What you’re looking for is called Performer on the CD Text/DDP because someone had to decide what to call it a long time ago. Performer, composer, etc. are more descriptive/precise than “Artist”. I’m pretty sure that’s why they were chosen.

In the CD Text Edit window, the buttons on the right side copy from the Album to every track if they’re going to be the same.

Justin shows it at some point in this video: WaveLab Pro Workflows with Justin Perkins #19 | EP/Album Mastering In The Audio Montage (2022) - YouTube

This one is just about metadata: WaveLab Pro Workflows with Justin Perkins #10 | The Metadata Edition - YouTube

Ah, thanks, yes that makes sense and happy to say (having done an overdue bit of rtfm

) that I did make use of the copy-paste down buttons.

Must say that the Steinberg forums are pleasantly full of genuinely helpful people and happily free from some of the ‘types’ (ahem!) one encounters in so many online forums. Thanks again to all.