So I was working in Cubase Pro 11.0.3 yesterday and noticed this fairly terrible problem. (description below) I updated to 11.0.4 but it’s still there.

Project file
Brief video showing the problem
(both hosted on my own server since this forum has a 4MB file limit, which is hilarious - apologies if you arrive here in the future and the files have long since vanished)

Some other notes that may or may not be helpful:

I really hope someone at Steinberg can figure out a workaround (if not a fix & patch) for this 'cause this issue is like dead-in-the-water, can’t-do-anything level of terrible. Please let me know if anything in unclear, if I can provide any more information or examples, etc.

Thanks very much in advance!

The tracks are Linked in the MixConsole and Routing is enabled in the Link.

Thank you @Martin.Jirsak - you are absolutely correct. Actually last night as I was going to bed I thought to myself, “THE CHANNELS ARE LINKED!” I did create a link for the audio tracks in that folder, but must have neglected to uncheck “Routing” and created that link group so long ago that I had completely forgotten about it. Doh! Easily addressed and all better.

…but there is a bug in here. I opened up the link group settings and saw this: 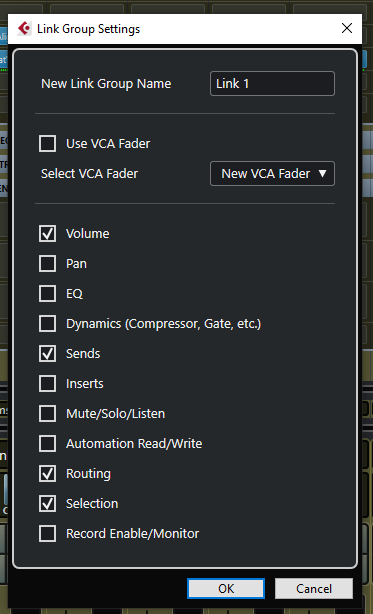 …which makes no sense for my linking use case - which was just to be able to easily record enable/monitor all the drums audio tracks at once (so as to print the “live” MIDI drums to audio). I also wouldn’t just leave the name as “Link 1” like that.

looks for the original project from which the drums were imported

Found it! The original link group I created is called “Drums Audio Tracks” and the only selected attribute is “Record Enable/Monitor”: 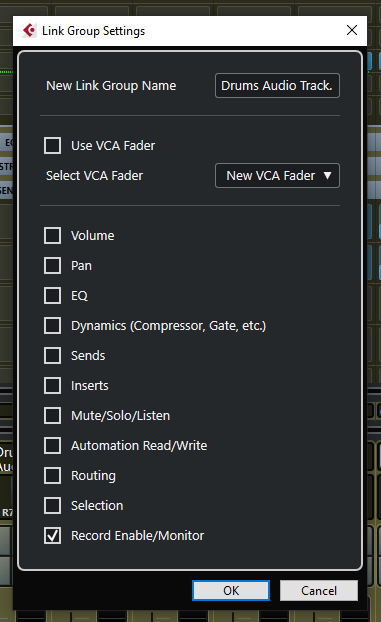 So the link group name & settings must be getting lost when being imported into other projects. I just did a test where I imported the entire drums folder of the project where the link settings were correct (named “Drums Audio Tracks” and only “Record Enable/Monitor” is checked) into a brand new, empty project. After the import finished the correct tracks were linked, but sure enough, the name of link group became “Link 1” and “Volume”, “Sends”, “Routing”, and “Selection” are the selected attributes. So I’m not totally going crazy re: having no idea why changing one track’s output routing was affecting others.

Anywho, should I change the title of the original post to something like “Track link group name and settings are lost after import”?