Consudering Nuendo, what hardware for Atmos?

Hi there, I’m considering moving up to Nuendo and looking for advice. Currently using cubase 11 through Sonic Core DSP with stereo analog stereo out on unbalanced phono, BNC out and 16 adat in/out with word clock out. What would I need (eg Atmos receiver/converters etc) to achieve a modest atmos setup to learn on and where in the chain would I insert anything needed? There’s a plethora of atmos receivers on the market place but I can’t seem to find anything without all powered outputs to speaker arrays in the EU/UK areas. Any pointers and advice would be really appreciated.

To properly mix Atmos, you need both a professional set of headphones, AND a 7.1.4 speaker monitor playback system. As in, 12 speakers in total.
For that to work with audio hardware, you will need an audio converter that has 16 channels of IO.

I myself might be experimenting with this format later in the year, and will be purchasing professional speakers to monitor off my Focusrite Rednet2 converter. I’ll be choosing JBL Professional speakers, and the budget will be about $3,000 USD for the whole shebang.

If you are just wanting to check out Atmos, you can do so with Nuendo, and only use headphones to monitor with. This is because Nuendo can convert Atmos into a headphone monitor mix. This way, you don’t end up spending a ton of money for something you don’t even know if you will be wanting to do later on.

There is a person here who has a “poor man’s” Atmos setup, maybe search around here to see what he does. Here is his YooToob channel: Balladeer Studio is a single-owner recording studio designed for singer-songwriters, owned and operated by Leo Brodie. It is located in Bellingham, Washington, United States. Join me on this channel as I learn to mix music in Dolby Atmos in Nuendo.

Thanks for your reply, yes I’ve seen the Balladeer channel on youtube, looked at rednet and lots of other pieces of equipmet(DAD/Grace etc etc) and i’ve done quite a lot of reading. As mentioned, I have a sonic core dsp as my audio interface gives 16 channels in/out on adat or 8 at 96khz) going into a ferrofish converter giving me 16 channels of analog which I can connect to 16 speakers if i so wish all under a common master volume from the Scope mixer(s) I used to connect the adat light pipes to my Roland VMC7200 mix system for 5.1 surround sound but I sold that a few years back. The Scope system has a comprehensive slection of mixer from a simple stereo channel up to a flown blown 48/96 channel (mixer with a stunning array of plugins and synths/samplers) as well as 16 channel mono/8 channel surround sound mixer, all of which can be addressed directly from with cubase as outputs/groups etc etc. I know that Sonic core are working on a Atmos plugin to render its output so dont want to go rushing into buying anything yet.

The question I’d like answered is this: if I route the outputs of Nuendo atmos through the sonic core DSP card through adat > Ferrofish > powered monitors, will I hear a mix from Nuendo in atmos from those speakers if they’re aligned properly, as I could do with headphones? without having to buy any other pieces of hardware/converters or atmos reciever at this point in time? Most of the hardware I’ve seen have madi on board which I dont use so, theres huge amounts of information and hardware out there to be checked out. Now that MIDI 2 is appearing everywhere and with steinbergs new API allowing good use of Avid controllers (at last) it might be the right time to move up to Nuendo. Maybe Steinberg/Yamaha, having recently stopped producing Nuage have some new hardware in the offing to provide a besoke solution to the conumdrum, I mean whats the use of selling millions of copies of Cubase 12 with atmos unless there’s accesable hardware to mix through other than headphones?

if I route the outputs of Nuendo atmos through the sonic core DSP card through adat > Ferrofish > powered monitors, will I hear a mix from Nuendo in atmos from those speakers if they’re aligned properly, as I could do with headphones?

The renderer will output to your outputs, so yes. If you already own a dongle just download Nuendo and run the trial and check it out for confirmation.

Thanks, that’s basically what I needed to know. I downloaded a demo version of nuendo some years ago so don’t know if I’ll be able to do that again. Out of curiosity though, who do all the literature and uploads to you tube go into depth on the must have atmos hardware to be able to mix atmos? What e trs benefits would it provide purchasing some of the hardware being discussed in forums all over the web as essential if the mix could be heard and rendered through Nuendo with the equipment already in house?

Out of curiosity though, who do all the literature and uploads to you tube go into depth on the must have atmos hardware to be able to mix atmos? What e trs benefits would it provide purchasing some of the hardware being discussed in forums all over the web as essential if the mix could be heard and rendered through Nuendo with the equipment already in house?

I think they’re either talking about using a renderer external to Nuendo in which case you need a lot of i/o to cover all the available Atmos channels - or they confuse the two which I’ve seen several times. On forums and on YouTube I’ve seen people essentially say you need to be able to output 128 channels from your DAW in order to do Atmos, and that isn’t true if you’re using a built-in/native renderer.

Um… because, in order to mix professionally, you do need both the speaker setup and the headphones.

At least according to Dolby, and pretty much all audio enginers who have actually mixed releases for Atmos. The headphones are just a convenient approximation to the “real” Atmos mix. They are not a replacement for the speaker setup. That is why even the budget guy has a “poor man’s” speaker setup.

There is no “Atmos hardware” per se. There is just hardware that enables you to feed the monitor mix to a 7.1.4 speaker setup. If you want to have your Atmos mixes translate in more speaker types, you do want to buy an ACCURATE set of speakers, and those are not cheap.

But, you seem like you just want to play with the Atmos setup, so you should not worry about the professional level speaker setups.

In one DAW, Pro Tools, you have to have an entire second machine to record the Atmos mix in real time, which is definitely not what you need. That would cost you many thousands of bucks to set up. Ignore those yootoob videos.

Stick to your headphones for now, then decide if you need a speaker setup.

I can assure you there’s it’s more than just playing around, it’s a carefully considered step up. There’s no issue with monitoring though there might be if Event 20/20’s were strapped to the ceiling! Final choice will be down to preference and, for example what has optional wall/ceiling mounting, nobody is gonna start drilling holes in monitor cabs to screw them to the ceilings! Then there’s the question of room acoustics, the rooms only 17ft long, it’s well treated though even 8" Event 20/20’s can be a bit of overkill, especially with the sub on line, the Presonus Sceptre’s are perfect for the room as are Focals but one has to consider how it will respond to speakers firing to a mix position from all area’s, what extra treatment may be needed etc etc. The Sonic core Dsp offers truly wonderful sound quality and given it can be fully customised with up to twenty outputs it’s been at the center of the setup for some years and, as confirmed will do an admiral job. There’s obviously a learning curve with new terminology, object based mixing etc etc. Watching various videos on you tube with all the high end protools setups with thousands upon thousands of pounds in hardware there’s still a lot to learn and maybe an atmos reciever may be useful at some point but certainly not yet as Nuendo can do so much on its own an N12 promises even more innovation, haven’t upgraded to cubase 12 yet so, Exiting times ahead! As far as hardware is concerned, maybe yamaha have a new series of desks waiting in the wings, something like the DM2000, (still a great desk twenty years down the line). Imagine a new version with all the required hardware for atmos in/out built in, that would be a showstopper!

Yes, it’s all a bit confusing and ultra expensive! Avid with their S4’s and Steinberg with their Nuage and all the ancillary hardware that’s tucked away out if sight on both systens! Thanks for your response, much appreciated!

For fader controllers, I am currently using Avid Mix and Avid Control. They are not perfect, but they do the job well enough for me to not need to buy anything new.

Ps, I just watched this live this morning, all about setting up an Atmos environment in Nuendo for mixing music.

Phil’s setup seems logical and simple enough once you go through it. 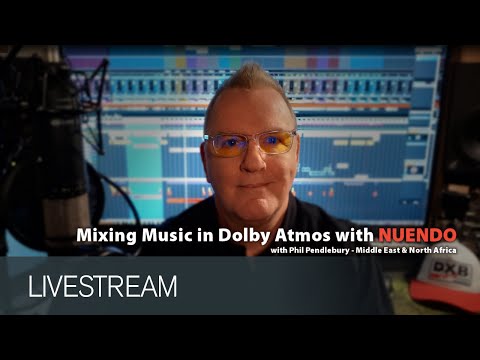 Snap on the avid artist and control, they’ve duddey become a lot more useful with the new API from steinberg, it’s so good not to have to scroll through the mixer to align and mixer configurations to align the channels to the surface, quite happy with that after a number of years badgering Steinberg to get it fixed. Maybe they’ll support avid surfaces more now that Nuage has bowed out gracefully even if it was a sudden exit!

Thanks for that, I really enjoyed watching it, I’ll watch again later, a lot of common sense information in there.