Coreaudio not showing up on M1 Macbook Air but ASIO is

For some reason my Cubase projects are showing ASIO driver. The audio is dropping in and out. And the audio files are degraded/not working. Any idea why this is happening? My sample rate matches from the Audio settings on mac to the audio settings in Cubase. Thanks 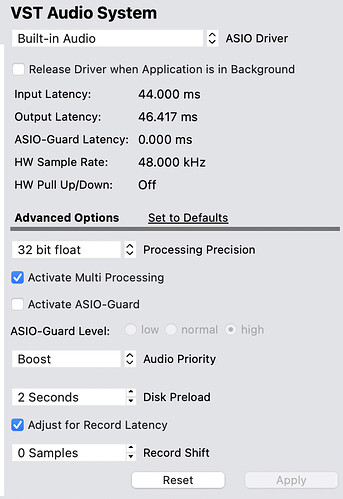 First of all, Cubase is not compatible with M1 processors yet.

CoreAudio has never been present in Cubase. You can see ASIO drivers only.

I’ve seen a lot of people running cubase on the new M1 macs without issue so I assumed there wouldn’t be major issues.

For what reason does Cubase use ASIO drivers instead of CoreAudio? Doesn’t that defeat the benefits of a Mac by not utilizing the lower latency CoreAudio?

I read something about the ASIO drivers being “wrapped” so that they can be utilized on MacOS by Cubase. What benefit does this serve? I read that it contributes to a bottleneck of sorts. I’m surprised this isn’t a common discussion, I can’t really find much about this topic.

For what reason does Cubase use ASIO drivers instead of CoreAudio?

Doesn’t that defeat the benefits of a Mac by not utilizing the lower latency CoreAudio?

I don’t experience this.

I read something about the ASIO drivers being “wrapped” so that they can be utilized on MacOS by Cubase. What benefit does this serve?

There is CoreAudio2Asio component in Cubase, which does this translation from CoreAudio 2 ASIO (and back). I don’t know the benefit(s). Only one I can imagine is, Cubase is the same on Windows and on Mac then.

After a bunch of different combinations I solved the cause of the audio dropouts:

Everything is now working perfectly.

I often compare the performance of the same mix with Cubase Pro 11, Reaper and Logic on a Mac with ample RAM, SSD storage, and a hyperthreaded I9 chip (not a laptop), so 8 physical and 8 virtual cores. The physical cores are used first by every DAW and are not even fully utilized in this mix by all 3 DAWs - and neither is RAM. But the ASIO driver in Cubase simply does not come close to being able to run the same plugin load no matter the settings (even at max buffer of 2048) compared to Reaper and Logic with the audio buffer at 1024 samples. Cubase cannot playback the same project Reaper and Logic do w/o coming to a halt because of ASIO overload. No setting of ASIO guard helps or turning it off. The worst thing is that even when playback is stopped, the ASIO load fluctuates and will hit a peak and sometimes overload even when the project is stopped. I’ve never seen the ASIO driver be efficient as core audio used to be (sans ASIO). I’m not eager to pay for an upgrade to Cubase 12 unless performance improves on (Intel) Macs running Catalina or BigSur.