I’ve been setting up some custom engraving options in a file, and am finally ready to make a “default template” out of it. I read the forum thoroughly and discovered I needed to set Engraving, Notation, and Layout options as default, which I did, and that I needed to delete all flows, players, and layouts from the file, which I did. (I even blanked out the project info.) I saved the resulting empty file as a new project.

When I re-open the file, Dorico crashes.

Update: deleting the flow first, then the players (and their accompanying flows), results in a small graphics oddity where part of the center of the screen is not blank white but is light blue. But deleting the flow first, then the layouts (and not yet the players), calls up the “First, add some players to your project” pane, even though the players are still there. The pane remains when you delete the players from the left panel. The crash still occurs when you delete all three (flows, players, layouts).

Update: leaving one player intact (even with all layouts and flows deleted) stops the crash from occurring when re-opening the file. It’s not a perfect solution, though — I want to be able to start with a clean slate.

Breakthrough update: apparently the project info has something to do with it, as does the order of deleting items. Starting with my original project (which was a score full of music and notations in which I could see my tweaks), I did the following in order:

As long as the project info has something in the title field, using this as a blank “template” file didn’t crash the program.

Then I tried a second approach: clearing the project info first. I did the following in order:

This second approach allowed me to save a “template” file that opens without crashing and is completely blank.

Important update: clearing the project info first, before deleting things in Setup mode, seems to be the key to making the resulting file not crash when it’s opened anew, but the weird blank-except-for-a-blue-rectangle glitch persists. This is much more than a graphics issue. Even if you delete things in the “correct order” (the “second approach” described above, which maintains the “Start by adding players” dialogue), the file is now incapable of holding on to its layouts. All modes appear blank, and there’s no way to input music. Creating layouts for the players, saving the file, closing it, and reopening it causes it to forget the layouts you’ve created.

There won’t be any way of creating music unless you’ve actually created a) a layout and b) a flow. The mere act of adding players is not enough.

Hi pianoleo, yes, I know — I just edited my previous reply to include more information on that effect.

I’M A MORON. I forgot to create a flow. Now the glitch disappears. It doesn’t even appear to matter in which order one deletes the players, layouts, and flows in the first place — I was just seeing the empty “glitchy” behavior appear at accordingly different times, but adding a flow eliminates it anyhow.

I don’t really understand why you view any of these things as a problem.

When you come to start a new project, you are always going to need:

A Player
A Flow
A Score Layout

Changing the instrument of an existing player is no slower than creating a new player, so leave yourself either an empty-handed player or a player of an instrument; doesn’t really matter which instrument.

Renaming Flow 1 is no slower than creating a new flow, so leave yourself an empty Flow 1 in your template file.

You’re going to need a score layout anyway, so why not just leave one in your template?

It’s all very well wanting to start from nothing, but, aside from the fact that it seems to cause problems, striving for absolute zero is going to cost you time and energy in every new project you create. So why bother?

Pianoleo, thanks for your response. Please be aware that your tone comes across as probably more aggressive than you intended.

Now that I realize my error in forgetting to make a new flow, I don’t see any of this as a problem after all. I just figured I’d leave the topic up in case anyone else tries to follow a similar path to creating a “default template.” There’s still the crashing bug, as well.

Sorry. Aggression certainly wasn’t intended. The context is no excuse, but I was posting af 1.44am having spent a long day recording, and tiredness plus a couple of glasses of wine might have contributed.

Re-reading, I can’t actually see the aggression, but that’s a) because I can hear my own tone of voice in a way that you can only infer and b) because I knew what I meant!

Leo,
FWIW, I was surprised because I don’t feel any agression tone either… and it’s true sometimes I feel it and it makes me

You guys should sleep at night (ok, this one’s for me too)

I just tried creating a “New Empty Project” from the hub. It looks like this: 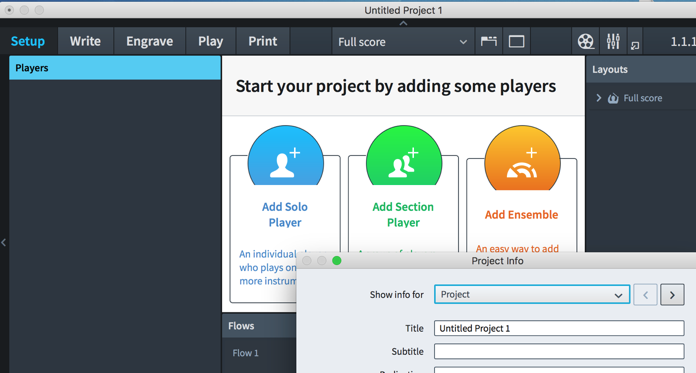 If Dorico considers this to be an “empty” project, I think you have to concede that this is the closest you’re going to get to a clean slate without causing problems for yourself.

I probably came off to at least one reader as a little blustery myself, without intending to at all.

Glad some of y’all could reproduce the behavior. I’m OK with the solution I found for now. Clearing out the project info first to prevent a crash on re-open, and the graphics oddity disappears once you add at least one player/layout/flow. I know they’re working on templates for a future update, anyhow, so eventually this will be an outdated method.

Just in case there’s any confusion at all:
The templates that already exist will take on all of the default Layout Options, Notation Options and Engraving Options that YOU have set, automatically, as well as text fonts/styles. What won’t appear in existing templates is Master Pages that you’ve altered or created. I’m hazy about custom Playing Techniques and Play Mode stuff as I so rarely use them/it.

Thanks for spotting the crash. We can fix that.

Thanks, all. It’s rather a lark contributing to the program’s development like this!