A few thoughts and suggestions on the Create New / Project Templates addition in v 4.0 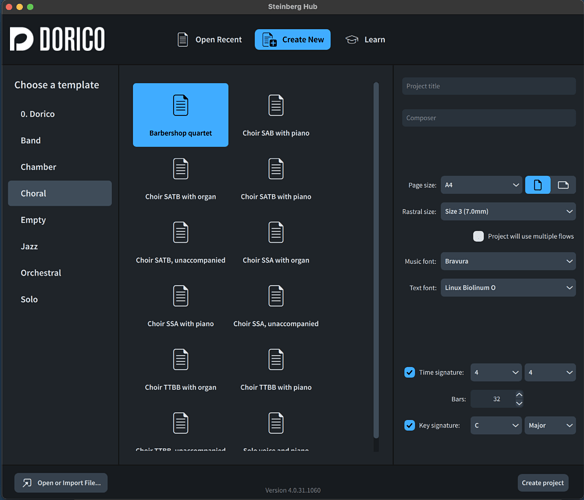 A little bit of background first. I’ve been making my own templates and modifying Dorico’s own templates. The aim is to minimise the amount of work I need to do right after a template loads. So, for example, they load with vst’s defined, Instruments loaded, Playback Templates set, Page Template Sets imported, Page Sizes and Fonts defined, and some aspects of Layout Options changed. Obviously I can go a great deal further but for the moment I’m limiting it to that.

And, for the most part, it works really well. Just I was hoping for from having User Templates included as part of Dorico.

It would be good if the above can be fixed but they can all currently be worked around. However, one issue can’t.

I’ll end where I started - the templates are a great new addition to Dorico. Thanks.

If you don’t want the settings on the right-hand side in the Create New page of the Hub to take effect, use File > New From Template to create your project: that way, only the settings from the template itself (whether one of the built-in ones, or one you have created yourself) will be used.

The Dorico Templates all load with Full Score Layouts set up for a Transposing Layout.

Are you sure you didn’t save them that way? I find it respects what I saved it as.

Thanks Daniel. The first para makes perfect sense - I should have thought of that.

However, I’m not getting the response I’m after from your second para - maybe I’m doing it wrong.

If I take a very simple template (Solo / Lead Sheet), change it to Jazz style fonts for Music, Font and Paragraph Styles (I used Finale Jazz), save it as a Template in the Solo Directory with the same name (Lead sheet) - if I then close it and load it up again from File / New From Project Template / Solo / Lead Sheet - the font changes aren’t reflected, nor are any other changes. This is also the case if I restart Dorico. It looks to me like I’m still loading the original Dorico Template.

If I save it in a new directory, it loads as expected if restart Dorico (my point 2 above) and then follow the advice in your first para.

Thanks Craig. I’m also finding it respects what I’m saving it as providing I save it with a title that doesn’t exist in a Dorico Template directory or in a non-Dorico directory. And no, I wouldn’t have saved Templates with a Full Score Layout changed to show a Transposing Layout - a curious change to make !

However, I’m not getting the response I’m after from your second para - maybe I’m doing it wrong.

No, you’re not – I’ve checked this again and a small bug has been introduced there at some point since we added the ability to have user project templates. I’ll make sure this gets fixed ahead of the next update.

Thanks Daniel - appreciated as always.

FWIW, this font behaviour confused me enormously until I read this thread. It seemed so odd that the fonts I’d saved with the template wouldn’t be present in a new document I created with that template, and I didn’t join the dots to figure out that the font options in the “Create New” tab were to blame, or that there was a way of bypassing them to get the results that I wanted.

It’s a small thing, but it would be nice if custom categories appeared in the File -> New From Project Template menu as well (they are only available in the Hub).

Which version of Dorico are you running? At least here (in 4.1.10) they do appear in the File > New From Project Template menu.

Ah, they weren’t showing here - but I restarted Dorico, and now they appear in the menu. Thanks!

Thanks for the update in this area. I’ve just done a few checks and all looks well so far.

Has this problem actually been solved? I’m finding the same thing that @David_Tee described. If I save a project as a project template, in the same category and with the same name as a factory template (ignoring the warning that “An existing template with this name already exists”, which makes me want to reach for a red pen), then create a new project using the template in that category with that name, what I get is the factory template.

Yes, so far as I’m aware, this has been fixed (I was the one who fixed it). If you find it not to be the case, please provide us with some more details.

Thanks, Daniel. If you’ve fixed it, clearly I’m doing something wrong.

I’m trying to replace the “Solo piano” template with one that uses a VST instead of HALion Sonic SE. I get the warning that this template already exists. I tick “Preserve existing flows” and “Preserve Project info” (probably irrelevant in this case) and save. I get the message “The file for project [not project template? – is this a clue?] Solo piano has been modified on disk”. I close and reopen Dorico. I choose “Solo piano” in the Hub. What I get is the original version, without the VST. Likewise if from the File menu I choose New From Project Template > Solo > Solo piano, except that in this case I don’t get 32 empty bars of 4/4.

The revised version does appear in ~/Library/Application Support/Steinberg/Dorico 4/Project Templates/solo, and it seems fine when I open it directly as a project.