The manual says create the audio CD using the CD Extra setting (more files can be added) then create a new Data CD project and write those to disc … this is not working for me … the audio CD burns normally but I get a message indicating that the program cannot locate a CD that is ready to write … it’s the CD that I just made using the CD Extra setting … what am I missing?

There are options to check: 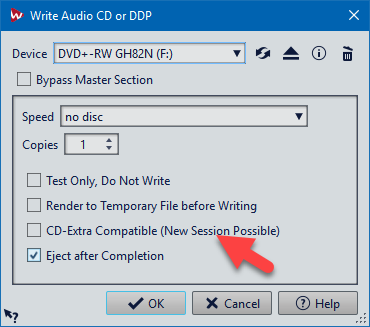 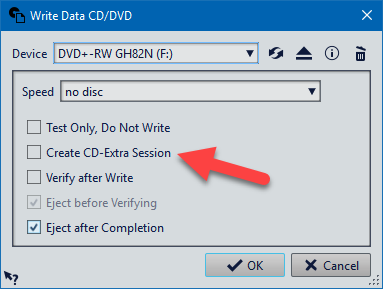 Thank you very much!

I had already done that once but was confused that when I looked at the result by opening the disc in Windows Explorer, the .cda files had disappeared and only the data (PDF files) was shown … I thought I had screwed it up somehow …

I just redid that process and it looks like I did it right as Wavelab now recognizes the audio data and Windows recognizes the PDF material … but it’s still confusing as the .cda files don’t show up in Windows Explorer …

Do you know why Windows doesn’t show both the .cda and the .pdf files in the Explorer window when you open it?

Whatever, much appreciated … I thought I was going nuts as I know I followed the general instructions in the Help file …

Windows just shows .cda as a way to show/play an Audio-CD track. There is no such ‘file’ on the actual disk, as CD-Audio is a continuous stream of audio data preceded by a TOC containing all info about number and length of ‘tracks’. With CD-Extra, the file system takes the data part as priority and shows the real files on the disk.