Hi. I’ve set up a “dummy session” with group tracks that I use as stem buses for my projects. These group tracks have routing, naming, and plugins already assigned to them, with the idea being that when I’m done writing and have bounced all my instrument tracks to audio, I can import my stem mixing plugin chains to my buses (group tracks) in the current session.

I have confirmed that the naming and routing of my group tracks in both the “dummy session” and my current project that I’m importing settings into are identical. I don’t know why the routing of my audio tracks is changed at all. Is this how the Import Tracks from Project command is supposed to work, or is this a bug?

Thanks for your help

Humm, I do this all the time. If the routing destination(s) don’t exactly match between the 2 Projects then it will get lost. But you’ve double checked for that. Maintaining destination routing is one of the main advantages that Importing Tracks from a Project has over Track Presets.

Here’s the settings that are successful for me. 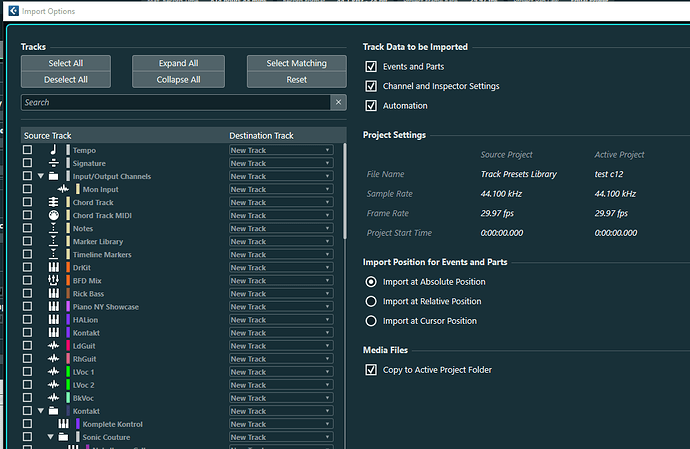 Thanks for your reply. I double checked the routing destinations again, and can confirm they are identical. And I tried the import method again using your settings, and my tracks are still losing their routing.

I think what might be happening is Cubase is importing and replacing the group tracks, instead of just applying the settings from the imported group tracks onto the existing group tracks. And because they’re being replaced instead of just having the settings imported and applied, the audio (& instrument tracks, I tested this with them as well) lose their routing because the exact track they were routed to no longer exists in the session, even though a group track with the same name and routing configuration is still in the session, if that makes sense?

The fact that it works for you, but you appear to be on Windows, makes me think this might be a Mac specific issue. If anyone on a Mac can confirm this behavior maybe that can help narrow things down.

I think what might be happening is Cubase is importing and replacing the group tracks, instead of just applying the settings from the imported group tracks onto the existing group tracks.

Yeah, that is a big difference from what I’m doing. My source & destination Projects have identical Group Tracks & routing. I never import or apply the settings from Group Tracks, only Audio and Instrument Tracks. And when I do that their routing matches what is in the destination Project and just ‘plugs’ into that.

Ah I see, then it might just be an issue specific to importing group tracks from my Mix Template into the existing group tracks in my current session. I’ll send an email to Steinberg Support, see if this is potentially a bug, or just how the import feature works with group tracks at the moment.