Using Windows 10. Had no issues with playback on any audio project when I was using it 3 weeks back. Last week I tried to sync midi with VS1680, but didn’t succeed.

This week when I used cubase, projects kept pausing randomly throughout the playback of a song - the time display and time line keep pausing when it happens. I notice if I scroll the Mix Console from side to side it pauses a lot more.

I’ve tried muting tracks which can help, but it still pauses occasionally with even 1 track playing. I checked Windows Task Manager Processes when a song was playing and it said CPU 14%, Memory 58% Power Usage ‘Very High’

Could a random MIDI setting I changed have caused this? I’ve no idea what’s happened to Cubase between last week and this week!

At 4096 some projects with less tracks played back most of the time with the occasional drop out, other projects are still dropping out a lot. If I open a channel settings popup during playback, they all drop out momentarily.

I watched the the Audio Performance monitor ‘Average’ meter during playback. It is peaking a lot and is very high a lot of the time. Even if I just open Cubase, open a project and do nothing else, the meter is moving around at a high level. Is this normal - surely if nothing is happening it should be very low? It’s as if something is running all the time and draining the performace.

Again, it’s very strange because Cubase was working without any of these problems 3 weeks back.

Could you test your system by using LatencyMon utility, please?

So I let latnecymon run for a while without cubase running - it doesn’t look good!!. I attached the different results.

I also updated all the licences for Cubase, Waves, Native Access, Kontact as I noticed some had updates waiting. This made quite a difference and the Audio Performance Average Meter, dropped to about halfway.

It still cuts out on a couple of busy songs. occasioanlly, especially if I open a channel setting popup. The only way to stop this is by selecting the ‘Constrain Delay Compensation’ button. 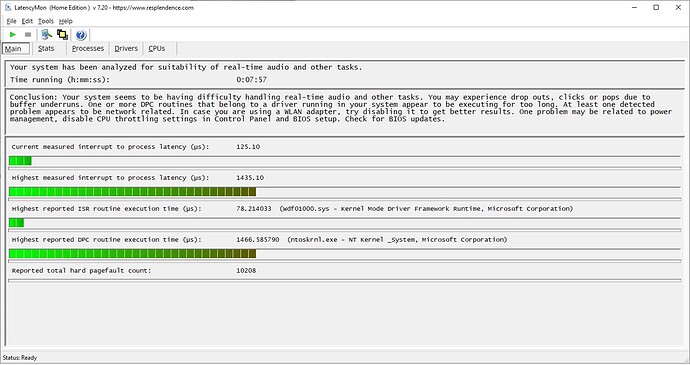 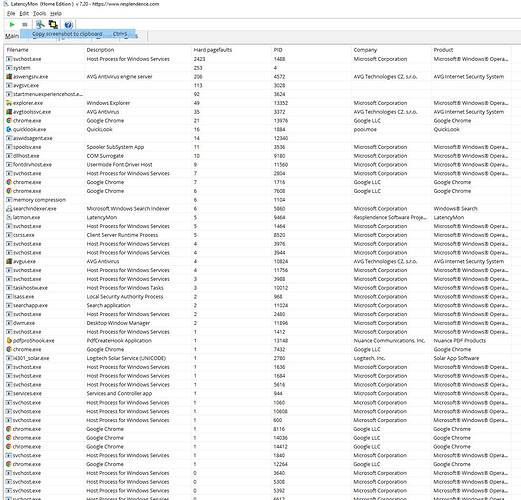 Turn off AVG and your issue is gone.
Most issues like this one come from other programs that run in the background.
Can you show a screenshot of Task Manager ? Maybe there’s not just AVG that steals resources, but multiple programs.

I had turned off AVG when I sent the previous message - I noticed it was in the latencymon processes. It didn’t make much difference. The main thing that seemed to help initially was updating the licences. However, the problem still remains - it seems to get worse the longer I use cubase. 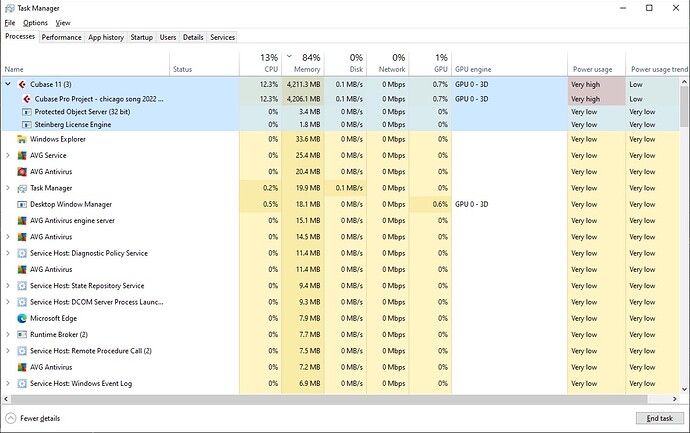 task manager - cubase with track stopped 3009221187×746 193 KB
The Audio Performance Average Meter started around quarter to halfway when I used cubase yesterday, but got higher the longer I used it. It kept cutting out when I was trying to record 1 track whilst listening to 1 other track yesterday. I’d muted all the other tracks.

I’ve attached the Task Manager Processes page that I turned on whilst using cubase - the track was stopped at the time.