So let’s review: 6/8 time means there are 6 beats in a measure and they are eighth notes. The User Manual (page 1023 of the online version) says that the tempo is indicated in BPM, which is “Beats Per Minute”. So Cubase really has all the information it needs to play this at the correct speed - it knows what a beat is (an eighth note) and it knows how many of them I want in a minute (130). How did it come up with 260?

Elsewhere I’ve seen some Cubase users say that Cubase does not count “beats”; it counts crochets/quarter-notes, so 130 is “130 crotchets per minute” but the documentation says BPM, not CPM or QNPM. Thanks in advance.

PS- Just to clarify - I’m sure there are plenty of work-arounds involving custom metronome click patterns or outsmarting Cubase with a different tempo setting, but my question is simply how did Cubase come up with 260 and where is that documented? 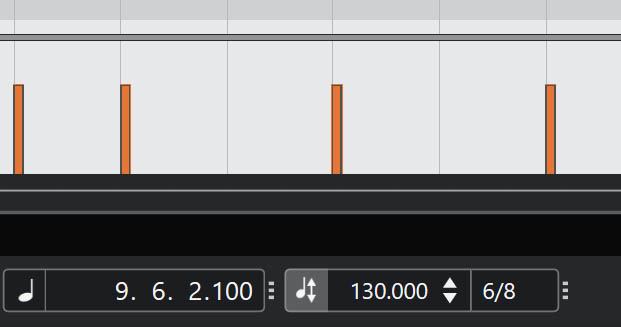 We can’t tell Cubase that we want the 8th to be our beat though. That’s the whole point. The documentation, and Cubase itself, always uses BPM. As you can see, it is not so.

But is that the answer to my question - when Steinberg/Yamaha/Cubase says “beat” should I always interpret that as “quarter/crotchet note”.

When I was researching this I found users complaining about it at least back to Cubase 8. It seems like it would be very easy to either fix or clarify in the documentation. Is its persistence a language or translation problem? I don’t speak German but is the German word for a “beat” in the musical sense the same as crotchet/quarter note?

But is that the answer to my question - when Steinberg/Yamaha/Cubase says “beat” should I always interpret that as “quarter/crotchet note”.

It depends. The whole issue is THE NUMBER. If you don’t care about the number, you just drag the tempo up and down until it sounds right. You tweak the metronome so that it clicks right, and then you forget about the whole thing.

The problems start when you transcribe a sheet for example in 3/4 that says dottedhalf=60. In cubase speak, this is 180. You write dottedhalf=60 in the score in Cubase, so that the performer understands, but Cubase says 180 in the tempo track.

Personally, I don’t care what’s going on in Cubase’s mind. I don’t care how it counts. It can count MHz in the background for all I care. I just want it to indulge me, the lesser human I am, and show me the number I expect.

Said number is variable, depending on the beat. A 6/8 time can be eighth = x, dottedquarter = x/3, or dottedhalf = x/6, or for really twisted minds quarter = 2x.

It would very much surprise me if it was a language issue. Tempo markings have been around for a while, and great German composers weren’t stangers to them.

A feature request has been made, I just hope the team finds time for this important detail and comes up with a really great idea on how to implement this with the least hassle and effort possible.

x/8 is double the bpm than x/4.
This is exactly the same with musical sheets. A song normally doesn’t start at x/8. Instead it will start at let’s say 4/4 130 bpm, then when the fast part comes in, you switch to 4/8 for a few measures, but the notes writing in Cubase is the same as in 4/4, just that it is played at double the tempo.

Except if you’re a drummer and play speed metal, I don’t think x/8 is the way to go

It’s all about organizing music in the most legible way, and about how the beat is felt while reading the music. A lot of stuff can be rewritten to different time signatures. You can completely forego 8 as denominator and just use quarters. What’s the trade-off? You miss the rhythmic relations between 8ths that stems create (since you’re then using quarters, and also you’re fragmenting phrases across barlines when they should remain highlighted within a bar (when using 6/8 vs 3/4. 3/8 is less common but it has its uses, the same as 3/16). This is a big bummer, and a lost opportunity for clarity, as in 6/8 you can very easily present a 3+3 8ths rhythm followed say with a bar of 2+2+2 rhythm, just by using stems. In 6/4, you have to use accents, or make it clear in some way that THIS is how I want it to be played.

Compound measures are a good use case. One can say hey it’s 4/4 time at 100 but we’re all playing eighth triplets, so it’s quarter = 100. Another one might just notate 12/8 at dottedquarter=100. It’s the same count, what’s different is how the material is presented, and what one might expect when it comes to subdivisions. (In the first case, I would expect straight 8ths and 16ths to come into play from the drummer for instance. In the second case, I would expect it to be 3-like all the way down, with the drummer breaking each 8th to 16s, which would be 16s sextuplets in the first case.)

For a sequencer, it doesn’t make a difference. Its little digital heart only needs to tick. It doesn’t need to organize the ticks into periods, nor argue and philosophize about whether this or that periodicity is the most appropriate for the sounds these periods try to tame. But for us, it makes a difference. And it makes a difference when you try to communicate with another human being. Some people have a special relation to the metronome, they can even get very close, or spot on, to a frequency. You tell them it’s 168, and they go "Somewhere here then? tap tap tap tap, and they are SPOT ON. So you imagine the confusion when you look at the tempo indicator in Cubase, tell them “It’s at 130”, and they go “What? No man, that’s nowhere near that? How are you even counting this?”

Again, the “problem” is just the number and the count base. Cubase has a quarter anchored as a count base. It can keep doing that. But I need a human interface between the number and me. I want Cubase to lie and deceive. I want Cubase to tell me “Ah, dear user, we’re at DottedQuarter=96”, while behind my back it keeps counting Quarter=144 and laughing at me. A win-win. I see the number I expect to see, Cubase keeps on doing business as usual and counting as usual. (which is tied to time-synced plug-ins like delays and such. It would be best if we didn’t upset THOSE balances by introducing unexpected tempo anomalies)

This discussion is all very interesting, but for the sake of finishing the thread, do we know what the answer to my question is, i.e., how did Cubase interpret the tempo and time signature to come up with 260? My suggestion was that it’s interpreting 260 BPM to mean 260 crotchet notes per minute, so if the denominator in the time-signature is 8, it multiplies its “BPM” times 2. Is that the case or is the answer that it’s another Cubase “Pro” unknown.

I already did art. The denominator does not come into play. 130 is about quarters. Each quarter has 2 eighths. So, in one minute you would get 260 eighths.

It works both ways too. Try this. In a blank project that starts 4/4 at 120, write down four quarter notes. 1, 2, 3, 4. Now, change the signature to 8/8. Does the speed change? No. Now change to 2/2. Does the speed change? No. So, the denominator does not matter when it comes to tempo and Cubase. What DOES change is the click pattern if you activate the click, that will click quarters for 4/4, eighths for 8/8, and halves for 2/2. But the tempo number remains the same.

The numerator is the number of beats that is contained in one bar.
The denominator is the length of each of those beats.
When you play the project, the Cursor will always move at the same speed, but the Grid will adapt to any time signature changes.

Look at the following image.

When you set the denominator to 4, the bars contain quarter notes.

Now change the denominator to 8.
The bars become half the length, because they will contain eighth notes.
Since a 4/8 bar contains eighth notes, it will go through each of these beats two times faster than it would on a 4/4 bar.
That is why the Metronome also adapts to these changes, but the Tempo remains the same.

The Tempo should always be seen as something global. You only set it once, then when you need to adjust the “playing speed”, you simply do that by adjusting the denominator of the time signature.

For example, we have a rock ballad that starts slowly for 12 bars, then the first verse comes in, it sounds like it is played twice as fast.

Although it would be tempting to keep the same time signature for the whole song, and instead change the Tempo directly, I do no recommend doing that in Cubase, especially if you are using Musical Mode.
In this case, changing the tempo is something that you should only do when slight adjustments are needed, for example when a part needs to speed-up or slow-down a little, but never to double or halve it.
If such a thing needs to be done, then you should always change the time signature denominator direcly.
If you don’t use Musical Mode, then yes, you can change the tempo as you want.