OK so this is a pretty annoying issue. First I thought this is caused by me sometimes not having the audio interface plugged in when starting up the DAW but I’ve been testing this thoroughly in the last few weeks, always switching the interface on before I open up Cubase.

What happens is that the input configuration is completely gone after a restart of the computer. 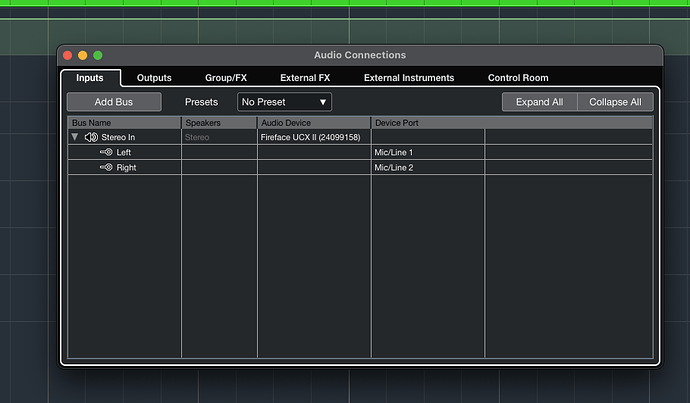 All I am left with is a standard Mic input setup. But my actual configuration, which I saved as a preset just to be save, looks like this: 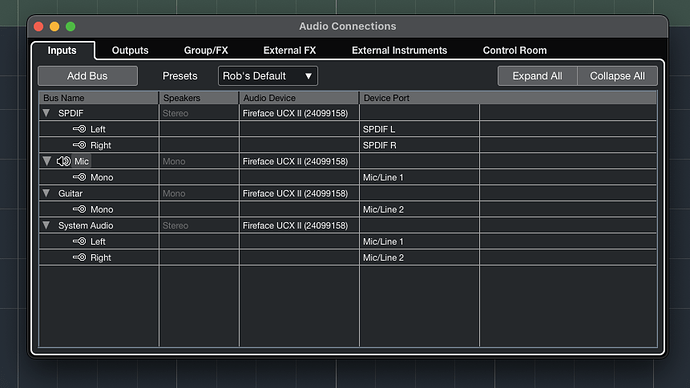 Whenever I am working in the DAW I have to double check if that configuration is still active. And it is not there in most cases. This is annoying and costs me time.

Why is Cubase “forgetting” the configuration?

It has no dependency on what project I create or open. I just quit Cubase at the end of the day and shut my computer off. Then the next day when I switch it on and start Cubase, the configuration is gone and I have to re-load it from the preset.

By the way, my friend @theMidiTamer just reported me that he also deals with this issue and he is using Cubase 11 - so this might be an issue that has existed longer than we might think.

#Quick question: is the input configuration stored in cubase templates as well? because if that is the case, I may just “overwrite” the configuration every time I make a new project using a template

I went ahead and stopped working, closing cubase to see what would happen. I then re-launched cubase (in Rosetta mode) and the configuration was back to zero. No input devices set. So a simple app close can already delete your input configuration?

Chiming in since I have been mentioned and have had a similar if not the same problem, but I’m using Cubase 10.5 on Windows 10, and this causes me to have to manually reconfigure all the INs / OUTs of my audio interface (MOTU 828 es) to my external instruments. 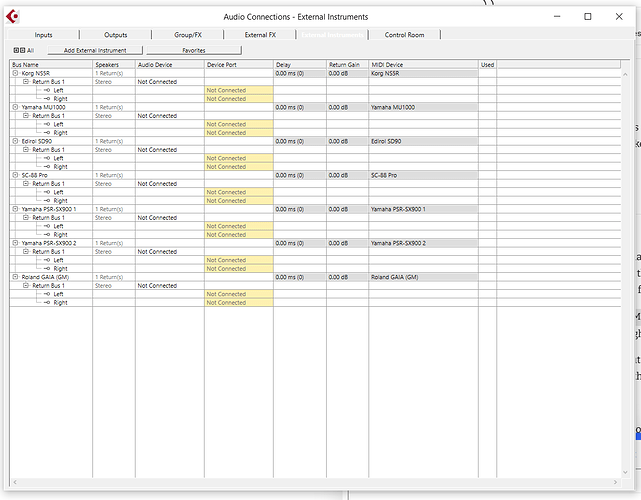 This happens every now and then, and I can’t really say what precisely triggers this issue (I used to think that the problem happened after a Cubase crash, but it was not always the case).

Simmilar here (Antelope Discrete 8 Pro connected via Thunderbolt). I have to say it did not happen (or at least was not so dramatic) when I use the USB connection or previous soundcard (UR824). It seems like some timming issue - but the Outputs, External FX (I have 2 hardware unit) and Control Room still OK and defined. So the mentioned above is really related to the Inputs tab. As soon as I apply the saved presed it is OK. I suppose there is some time difference in starting sequence for Cubase when it is communicating with the Audio System set (from last session); and based upon at least the driver used these definitions may last or may be lost and user has to reload them manually (from preset lets say). Annoying but there might be bigger problems

of course resolving this behaviour would be nice but I think it differs widely through the interfaces and their drivers…
P.

And I can say the closing Project and opening another (based upon custom template) is enough for all inputs in the Audio Connections tab become disconnected.