Cubase 12 seems to be a bit overzealous with the blocklist

yeah, none of these are 32bit - any way of fixing this? It was fine until I opened this morning and then it decided to just wipe out half my vst3s 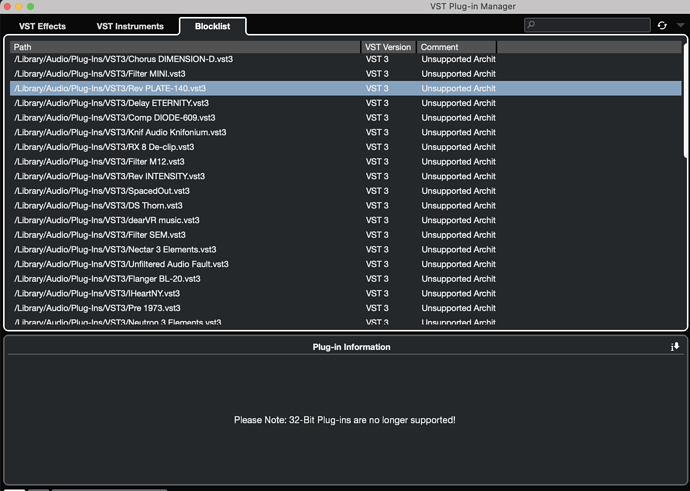 Thats odd, My plugin alliance plugins are all fine, wheras some of yours blocked. Overall my blocklist has come down to one particular slate plugin (which I never used anyway) and NI Battery 4 (havent updated either of them in years so hopefully an update will solve both). Pretty pleased with blocklist improvements really! My PA plugs were listed as VST3.6.7 and all 64bit if thats any help.

I also encountered this situation, M1 chip computer. Most plug-ins are blacklisted. Have you solved it now?

But what I’m more confused about is why Logic Pro X scans all my plug-ins and works flawlessly.。。。

M1 has functionality to make AU plugins work under Rosetta so on a plug-in level Intel so AUs can work in an M1 native DAW like logic or Ableton 11.1. But Cubase doesn’t support AU.

M1 native coded VST2 have been removed by Steinberg on purpose so now we are left with only native VST3.

You can use the “Get Info” tab on the badge icon and tick “open in Rosetta” and all your plugins will come back in C12. It’s only in native mode you lose the plugins, that is by design. Steinberg are going to stop supporting VST2 and the native version of C12 is the first one to be hit.

That seems a bit strict. IIRC Arturia plugins aren’t native but they’re fine. All these that have been blacklisted by Cubase are also fine in the M1 version of Ableton Live. Also, it only happened now, and not yesterday, where I was able to pull in some of those now blacklisted with no issues.

It only happened when i tried a template though, maybe that was it (just need to find the file to wipe the blacklist that way to test)

I still don’t quite understand what you mean. Since vst2 is not supported, why are most of the plugins of vst3 not supported? Do all plug-ins have to be adapted to M1? So how does logic pro support vst2 and vst3 plugins in native mode?

Yes they have to be native plugins to work in a native DAW. The only exception is AU plugins but as Cubase doesn’t use them then your left with VST3 native only.

Logic does not support VST or VST3. Logic only supports AU format which can convert intel to M1 on a plug-in basis, no other format can do that. So your plugins you see in logic are because you also installed the AU version.

Ok so the fact that they need to be native seems to be correct - found the file to delete to clear the blocklist and as it happens, some arturia plugins had a native update today. et voila, those work now, the others remain in the blocklist.

Still, it begs teh question how every other major daw can handle rosetta based vst3s and cubase can’t…

Other DAWs cannot handle Rosetta VST3. Ableton 11.1 only opens with Native VST3 as well. I do not think any DAW that is running in native mode will open none native VSTs. What your selling in those other DAWs are AU plugins which is an Apple created format. That’s why Cubase will not use it because they have VST and Apple have AU.

Sigh! Why can’t they all just get along together… (BTW i think the exception is bitwig which does some weird stuff to allow non-native but who uses that anyway ;D)

I agree. It would be great if there was just one format and everyone used it. Maybe one day

You can pick Patchwork up from AudioDeluxe for about $70 as they add a discount when it goes into your cart.

Unfortunately it will not convert AUs via rosetta into C12 Native which would have been perfect.

But the UAD Plugins work now

This is an Apple problem. Apple didn’t make architecture switching “transparent” – there’s no “Magic translation” for loading a plugin of old architecture into a host of new architecture. (They actually made that work back in the 68k->PPC transition days, but those were the bad old days!)

I’m not sure about that. For Ableton and Logic the AU plugins do convert via Rosetta on a plugin level and they work within the Native DAW.

Apple actually did make it easy, if your DAW supports AU then the plugins will be converted to native via the Rosetta layer in a native DAW. It’s just Cubase has never supported AU plugins. Apple was never going top convert VST because it’s not their format but AU is an Apple format and they converted it and it works rather well.