I recently installed Cubase 12, and I’m still trying to make it work as efficient as I was used to with the previous Cubase version, 10. I just noticed yesterday another problem with “Audio Export”, that the end result is messed up. It seems the MIDI events are not followed properly during the “Audio Export”, and volume balances and other changes done with the MIDI controllers are not followed as they should be, and this way the end sound result is basically a disaster! …

I figured if I use “Real Time Export” it might help, but it didn’t, the result is almost the same. I even installed the previous version 10 again, and the exact same thing happens there as well. It might be some setting that is needed to be set in Kontakt, but I haven’t found out anything yet … and if it’s even there (Kontakt) the problem, or Cubase, or both, I don’t know …

If this problem is not resolved then it renders Cubase useless, as I won’t be able to export the final music result!!! …

If anyone has a solution, or point out some things to maybe get to a solution I’ll greatly appreciate it …
Thanks!

If you say, you didn’t have this issue before and now you have the issue in both Cubase versions, it sounds, the issue is on Kontakt side.

If you say, you didn’t have this issue before and now you have the issue in both Cubase versions, it sounds, the issue is on Kontakt side.

Any idea what kind of change on a Kontakt setting (or settings) I have to do that might resolve the problem? …

And I’m not entirely sure the issue is exclusively on the Kontakt side. That’s why I tried “Real Time Export” but that didn’t work either … With “real time” performance the MIDI events sent to Kontakt shouldn’t be messed up! … but still …

I don’t have Kontakt but, as a first step to solve the problem, I would try to Render in place the Kontakt MIDI parts involved, this to work around the MIDI events synchronization issues.

I would then try again the Audio Export as a second step, with only the rendered audio events.

Thanks for the answer @cubic13 ! …
However, I can’t use “Render in Place” because I don’t have the Pro version … but thanks anyway …

Which version do you have ? I ask this because I see that the Render in place feature is also mentioned in the Cubase Artist manual.

Alternatively, you can try a similar approach, using the Freeze function for the Kontakt tracks involved. A dialog will probably appear which will ask you if you want to unload the instrument : I would do so, before trying again the Audio Export process.

I use the “Elements” version planning to upgrade to Artist at some point …
Meanwhile, I found the solution for this problem, and it has to do with how the MIDI events are set up, and I’ll post about it next.
I’ll have in mind what you said about “Render” and “Freeze”.
Thank you …

The solution for this problem is how the MIDI events (automation) are set up. And just to be clear, the problem has nothing to do with Kontakt! … It’s entirely a Cubase issue … (@Martin.Jirsak)

I had realized long ago about how there is an issue with MIDI events in Cubase, so I have developed a work out with the issue which is a painstaking and somewhat time consuming way, but necessary to be done this way, because I heavily depend on MIDI events working very precisely and correctly. This time I was negligent about it because I have spent a lot of time in the last few weeks sorting out a lot of issues after updating and installing Cubase 12, and so I missed that …

Below (1st picture), is the way of how I usually set up MIDI events (automation) so I don’t have problems with them. I do this on the beginning of every music section (phrase) that I want for sure the MIDI events (automation) to be precise and correct, and be picked up by Cubase for sure. If a value of a MIDI event is before a section (2nd picture) then Cubase might not pick it up correctly and that’s what was happening here when I was doing “Audio Export”.

Below, the music section (phrase) starts at bar 1, and the “Audio Export” was starting a quarter note before that.

Thanks everyone who tried to help! …
Nikos 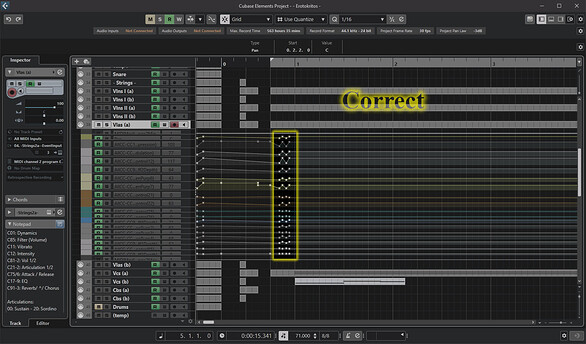 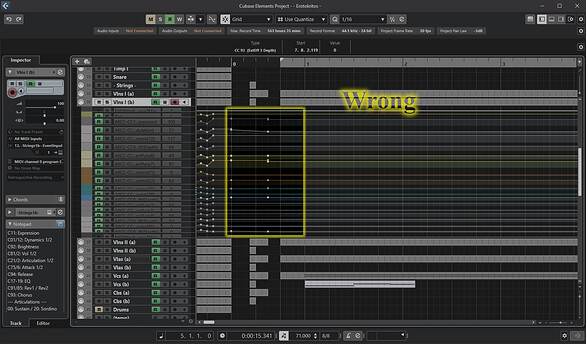 Sorry, I don’t know, where should I focus exactly at your screenshots, please? Is it about the init automation nodes?

Could you share both projects for the testing purposes, please?

Thank you for your effort.

Yes, it’s about the automation nodes (area highlighted in picture below) … I updated the picture on my previous post as well.

The music section (piece) starts at bar 1 on the picture, and just before that all the MIDI controller (automation) events are changed several times (as the picture shows) so that the desired final values can be picked up by Cubase for sure … 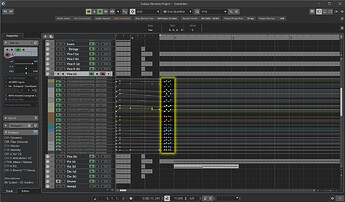 When you say two projects, what do you mean? It’s only one project, but two different tracks in the above pictures, or you mean the old and new corrected project? … But anyway, basically the issue is what I described. By sharing you mean posting the Cubase projects here, zipped for example? If that’s what you mean and it’s necessary I will post the projects reduced … let me know …