Hello, Im curious about how many audio and midi tracks have Cubase pro? whats the real amount? is this infinite for real?? or is about 500 audio and 500 midi? I dont think is possible a DAW having infinite amount

The limit is hardware dependent rather than in the software (unlike the lower versions where the limit is coded).

It’s certainly not 500 or even 1,000 as that can be accomplished even on my older PC. Don’t think it would like too much happening on those tracks but again that’s my hardware not the program.

only by curiosity if someday you hace the chance to capture an image with that quantity or 1000 tracks can you take an screenshot to see how this looks?

im in shock! I was thinking 200 tracks been a lot! but compared… is just a little point

No, it depends how is the code of the plug-in written.

If every single VSTi can handle 16 MIDI Channels (good intend came handle even more), you can get up to 1.600 sounds.

Btw, this what you mentioned is not Cubase issue only.

I have as many as 1500 now. The one below has about 800. Most people I know that do scoring have every articulation loaded one per track. I try to use expression maps where possible. Before I started using expression maps I had a template with something like 3000 tracks. I’m actually considering going back to individual articulations because the expression map editor and management is still ultra primitive. However, I have a couple of OSC mappings that allow some control over Spitfire libraries without having to do the breakout, so I’m conflicted. Waiting to see what happens with the VSL Synchron player.

Anyhow, the visibility agents really make this manageable. This is another area where a great idea is implemented in a crap manner … adding new tracks to all visibility configurations is a terrible waste of time in templates of this size. That said, I can hit alt+1 and just my strings will be displayed. ctrl+1 all tracks, alt+ctrl+1 all strings with data at cursor etc… etc… 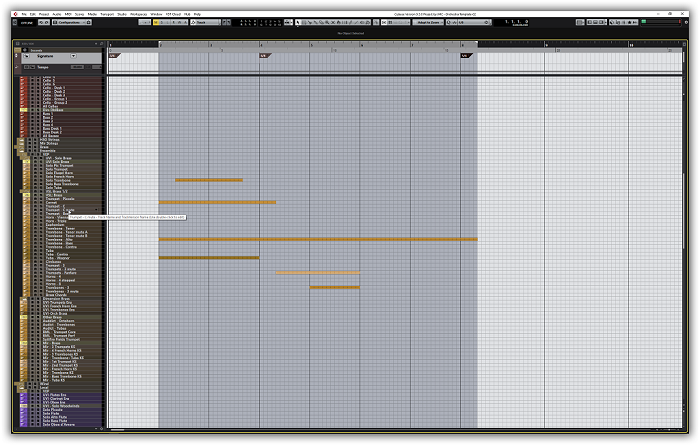 wow JMCecil its amazing! but it could be nice to watch this image on better resolution, I dont wanna be annoying is just im very curious about it…

if you dont mind, do you think is possible to post here?

so I guess you are film composer? or orchestra?

wow JMCecil its amazing! but it could be nice to watch this image on better resolution, I dont wanna be annoying is just im very curious about it…

if you dont mind, do you think is possible to post here?

so I guess you are film composer? or orchestra?

I’ll see if I can get round to posting the picture in a shareable way this weekend. I don’t use much social media.
hack composer wannabee

in any case thank you by the input