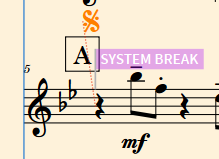 I’ve already tried going to Engraving, Repeat Markers, options and edit the positioning of the Dal Segno symbol from there, but absolutely nothing changes when I do that.
Can you help me?

Yeah, this is a little irritating…

You’ve got to switch off collision avoidance for these items, and then position them in engrave mode…
The other way would be to move them out of the way in write mode, for non - playback items this also works well.

How do I do that?
Just tried to find out in the “Manual” but it is not described step by step and no pictures.

You can only disable collision avoidance for text items, not rehearsal marks or repeat markers, I’m afraid.

Oki. so is there a solution to my problem other than moving things around manually in engrave mode?

I’m sorry, I was not intentionally misleading you…

Probably happened because I stopped using Rehearsal marks a long time ago, replacing them with custom, bordered text, so they look exactly like rehearsal marks…

And tied to a special key command, of course!
But my second way is still viable, I presume, just shift the object to different beat, and all is well!

Not really, Benji. Rehearsal marks can only attach at barlines, and if you move a segno marking in Write mode it’ll bork the playback (which isn’t necessarily a problem if Carsten doesn’t need accurate playback, but he might).

Ah, Leo, but in my original answer I specified non-playback items…

A segno isn’t a “non-playback item”. It tells Dorico how to perform a repeat structure.

Hihi, no, but a rehearsal mark is…

Sure, but we’ve already established that rehearsal marks can only be attached to barlines. There’s no possibility of moving a rehearsal mark a 16th to the left (or whatever).

Next bar line then , and off to engrave mode it is…
In order to fix the vertical issue, a 16th shift isn’t the answer anyway!

Carsten, so you need to either use workarounds (i.e. objects for which you can disable collision avoidance) and then adjust in engrave mode or shift objects around in write mode (since staff spacing doesn’t respond to engrave mode adjustments), and then move it around to taste in engrave.

Yeah. Moving manually or workarounds (sigh). Because playback is important to me.
Pianoleo & Lillie: is this one of the things that will be adressed in coming updates? To me, this is not a small thing.

Presumably one would only need to mimic the Rehearsal Mark and disable Collision Avoidance where a Rehearsal Mark conflicts. The others can be regular rehearsal marks with an adjustment to the Index in the Properties Panel.

I’ve noticed this, in relation to segno marks and also for fingerings of chords (which of course take up a lot of vertical space), but I’ve never seen it stated explicitly before.

Is this something that might change in a future update? It would most certainly be welcome. (At least by me, not wanting to speak for other users.)