Or this with DTouch Multitouch software

+1 for Metagrid. Just bought it last week and it’s fantastic!

No internet in the studio, after initial installation it would just be a dedicated hardware controller …

I don’t think you are forced to use wifi. There are 2 ways, either wifi or hard wire from iPad to PC via usb. I use wifi, but since I’m paranoid about loosing all my metagrid configurations that have evolved over the past year, I back up regularly from iPad to PC, and that requires hard wire…not possible via wifi.

thanks, Greg !
a friend offered me to borrow his iPad (including USB breakout cable) during summer holidays, so I’ll have 3 weeks to try out Metagrid in my own ecosystem.
well worth “wasting” a license @ $15 to find out exactly how we get along …
it’s entirely possible I’ll cave in then, but I want to make sure before spending € 350.
cheers,
Rhino

I got a used instead of new iPad which saved some money and it works great.

adding to Raino’s Metagrid suggestion, and -steve-'s MIDI KB one, there are several ASCII based KBs that are made specifically for this task.
You can define your own multi-key combinations in the driver “per key” (Like your alt+shift+f12 for example), which have to correspond to the KCs you assigned in Cubase for your actions & macros - it’s dead easy and 100% reliable.
I use several of these in combination : 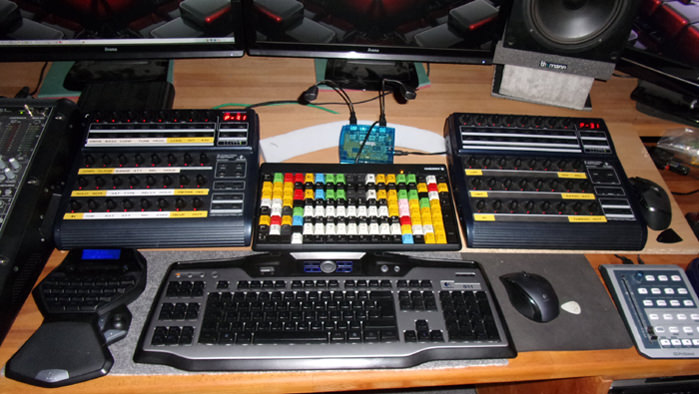 a general piece of advice :
you’ll soon notice that the real challenge is “brain to KB” mapping, not the “KB to Cubase” interface.
I rely heavily on colours and shapes (both physical key- and colour patterns) for memorizing, works really great for me.
If you have to check out written key labels before pressing your KC, you’re doing something wrong, even the mouse might be faster then.
so my seemingly wild mix of devices actually makes perfect sense from the memorizing standpoint.

hope that gives you some ideas,
all Windows, ime, ymmv,
Rhino

Beautiful set-up. I finally got an I-pad and metagrid. I Installed the server, the virtual midi-port and base template. Working up the macros and other things.

Right out of the box, I was very happy with the functions. I’m sure I’ll tweak things as I get more adept at using it.

Metagrid really seems to be a great way to operate Cubase.

What a clever setup Rhino, congrats, its inspiring!

I found a little stand like this dramatically improved how I’m able to interact with the iPad while using Cubase.
https://smile.amazon.com/dp/B07CG71KQ1/ref=psdc_3015412011_t2_B014GCTGFM

Also somewhere above were some comments about using Metagrid only tethered by USB to avoid DAW internet access. Using the iPad without a cord, just grabbing and going wherever you like is a big plus. And you don’t need to access the internet to get there. You can have a little LAN in the studio that talks to the iPad wirelessly but doesn’t connect to the outside world.

Also gaming mice should be mentioned since they typically have a bunch of programmable buttons.

I didn’t read every post in detail, but if you’re looking for a keyboard for macros it’s also possible to look at keyboards dedicated either for that use like the X-keys products;

or, you could actually look at products aimed at retail (stores). These POS (point-of-sale) keyboards often have software that goes with it, and have multiple layers, and allow for both separate key strokes per key per layer as well as macros per layer.

A while ago I ordered and received an 84-key keyboard from Preh Keytech and it did what I wanted it to do pretty easily, although with an ugly software. One thing to add is that sometimes adding a delay between key commands is really useful. Depending on the software (DAW) and computer rapidly firing keys in succession might not properly trigger the correct commands in the DAW, so a delay between commands sometimes solves that.

(Prehkeytec page as an example)

I found a little stand like this dramatically improved how I’m able to interact with the iPad while using Cubase.
https://smile.amazon.com/dp/B07CG71KQ1/ref=psdc_3015412011_t2_B014GCTGFM

Kidding. The stands look great, thanks.

When I get it set up correctly (for me) it will be QWERTY keyboard, then i-pad within easy reach. I think the arm and wrist angles will work out like that. I’ll post a shot and get back to some of the other metagrid threads when I’m more up to speed with it.

Your help on this and so many other things is greatly appreciated.

A little late to the party…
No need to pay big bucks, you can plug in any standard USB keyboard (in fact more than one) and use this tool

to define any shortcuts or macro sequences across all the keyboards. It even has full scripting engine for some devious shenanigans.

There is a second app that does the same with any MIDI devices (like pads, launchpads etc… even sliders)