Diacritics and other strange text

Hello Dorico users
I’ve got a score where I want to insert some non-standard text. I’m having trouble with all the following…
(1) single letter b underlined. I know you can underline blocks of text, but I just want to underline this letter.
(2) distinguish between straight apostrophe, single open quotation mark, single close quotation mark. That is, I want one straight up and down apostrophe, one leaning left, and one leaning right.
(3) Hebrew diacritics. In sib I just typed, say, Alt+05A3 and I got the munah accent. This doesn’t seem to work in dorico. Is there a way of inserting these more obscure ASCII codes.
Thanks for any advice.

What’s the context? Lyrics? Shift-X text? A player or layout name? Alt+0 is the factory shortcut for setting focus to the score window, which is problematic if you’re typing into a field in the properties panel, but it shouldn’t cause problems in e.g. Shift-X text or the popovers.

Thanks, Leo. These are lyrics.

Btw I can get the usual extra symbols easily enough. If I type Alt+0233 in the lyrics popover I get e-acute.
But anything that involves a letter (Alt+05A3) types out the letter (A).

Well done for exposing three problems in one post

On Windows 10, there is a new input method using “WinLogo” + “.”
Have you looked, if you could enter the character from there?

Thanks to you both. I tried Win+. but the list of language symbols does not include diacritics.
I’m going to open a new post here to see if I can get the design team to take an interest.

Dear Dorico design team
I wonder if you could consider these for your next update…
(1) I want to underline certain letters in lyrics, say a single b. In Sibelius, this was a piece of cake. Just highlight and underline. But, in Dorico, it looks like it’s impossible.
(2) I want a combination of smart and dumb apostrophes. In Sibelius, a dawdle. Three different combinations of Alt+Shift+apostrophe, or even use the context-sensitive right-click. In Dorico, apparently impossible.
(3) I want to insert Hebrew diacritics. In Sibelius, dead easy. Insert the code, for instance, 05A5, followed by Alt-X and, bam, it’s there. In Dorico, apparently impossible.
I would imagine, since you folks achieved these things so efficiently in Sibelius, you could also put them in Dorico.
I recognize that these features might not be everybody’s priority, but I think I’m not the only person who may provide linguistic transcriptions in their score from time to time.
And it would be a shame if Dorico continued to lag so far behind Sibelius in this (for me) important feature.

For the next update?

2 and 3 seem like the same thing: adding whatever characters are available in the font. They should just work from the OS’s text input. Or use a utility like PopChar (both platforms) to select whatever glyphs are in the current font.

I’ve merged your new topic in with the identical existing one, David. You can rest assured that we read every post here on the forum, even if we do not reply to every single one. (Though I do reply to a good proportion, hence my more than 17,000 replies on this forum.)

Your requests are not unreasonable, but they’re not easy to achieve because lyrics currently cannot contain any rich formatting. We would like to do this, but it’s a big job and I cannot at the moment commit to a specific timeframe when it might be achieved.

David, if you need a single letter b underlined, and are meanwhile asking how to type a Hebrew diacritic, I suspect you actually need the underlined b for transliterating Hebrew, is that correct? Using the underline style to indicate a horizontal stroke below a letter is not the best method to achieve that. In Unicode, a number of precomposed characters with a stroke (macron) underneath are defined, e.g. ḇ (U+1E07), ḏ (U+1E0F), and several others. There are also combining diacritics U+0331 (COMBINING MACRON BELOW) and U+0332 (COMBINING LOW LINE). Combined with b they yield ḇ and b̲.
The fonts you use in Dorico may or may not have these glyphs on board. I don’t think Academico has. If the font you’re viewing this forum in lacks them, you probably see boxes or questions marks now.
So, in the end, for your first question a Unicode character selection utility may also be the answer. 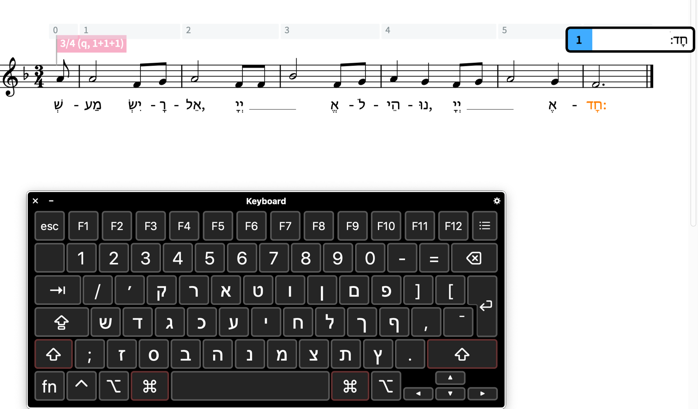 That’s 20 minutes of my life I’ll never get back!
(Available for chuppas, bar/bat mitzvot, funerals and now type-setting for synagogues that are above transliteration)

Peter, brilliant point about the combining underline unicode characters. Dorico definitely supports them, but it sounds like there are problems with typing them on Windows without some fiddling at the OS level.

Well, thank you everybody!
Nice Shema, Leo. Kol ha-kavod! I have no problem inserting Hebrew letters when I need them. I just change my keyboard to Hebrew. But how did you get the vowel points, please? And how did you open that keyboard icon and get it functioning in Dorico?
Thanks, Peter. Yes, Times New Roman is my lyrics font. But I’m afraid I can’t get these diacritics to work. Like I said above, simple ones are easy to find. To insert é, I can type Alt+0233 in the Lyrics popover and it comes out fine. All the standard Euro combinations are fine: à, š, ø, ü, etc. But when I do the same with 0331 or 0332, all I get are the letters Κ or L. And when I do anything with a letter (like 1E07), all I get is the letter (E).
I’ve found a sort of solution. If I type out the problematic syllables in MS Word, using the characters that are not available in Dorico, then I can then copy and paste them into the Dorico lyric popover. The only problem is that Dorico still auto-corrects the straight apostrophes to smart apostrophes. I’d rather it didn’t. But everything else is fine.
Thanks to Daniel. Glad to see that my request may be on the to-do list for the future.

Using a Hebrew keyboard definition (I use the Qwerty variety), I have access to all vowels when I press the Option (Alt) key. The Unicode Alt+hexadecimal input method also works, for inputting e.g. ḇ. But I’m on Mac… There must be something on your Windows system, or in your installment of Dorico, that intercepts or re-interprets some Alt-keypresses, but I’ve no idea how to fix that.
FWIW, I dislike straight apostrophes. They’re a remnant of the typewriter era, and IMHO should be avoided in typography. The problem with automatic substitution is that some words (quite common in Dutch) can start with an apostrophe, which should be a ‘nine’, not a ‘six’. And, of course, they’re distinct in Hebrew transliteration: א = ’ , while ע = ‘.

(Edit: on my system, this forum is displayed in a font in which the opening and the closing single quote are very hard to tell apart…

According to https://en.m.wikipedia.org/wiki/Hebrew_keyboard#Layouts Windows supports niqqud on the third layer: with the AltGr key. Does that work for you?

There are transliterations where shəva (schwa, šəva…) is represented by ə (U+0259, IPA) or ǝ (U+01DD, actually an Azeri letter). For the very furtive ones there’s even a superscript: ᵊ (U+1D4A, also IPA).

Well, it’s amazing what you learn on the Dorico forum! In my two decades of working with Hebrew Word I never realized the nequdot could be inserted this way. I always just used the character map. Thanks, Leo. Still, it’s really the te’amim (cantillation marks) that interest me. And, as your link says, there is no way to input them from the standard keyboard. But I’ve found that I can insert them in an open Word doc and copy and paste them from there.
Thanks, Peter. Understood that there are several ways to transcribe sh’va. But for a user-friendly transcription the apostrophe is nice and simple.
Finally, does anyone know if there is any way that Dorico can do different lines of lyrics in different point-sizes (in one page of music)? I’m not finding it.

Finally, does anyone know if there is any way that Dorico can do different lines of lyrics in different point-sizes (in one page of music)? I’m not finding it.

Dear Mnatseah,
You cannot have different point-sizes of verses. What you can have is different fonts, sizes, styles between regular lyrics and translations or chorus. You’ll find those font styles in Engrave mode>Engrave menu>Font styles. To open a translation lyrics line, when in the lyrics popover, press alt-up (or down) arrow (you’ll see a * next to the verse line in the popover). To open the chorus line, press up arrow until you see “c” in the popover. Hope it helps !