Hello. How di I get a Diminished Chord symbol being displayed in the chords popover?
When I enter a letter and one of these:

as suggested in the manual , nothing like that is displayed.

Why? And how to do better?

The input is totally fine. It’s Dorico’s output that’s not doing what you expect.

Go to Engraving Options > Chord Symbols > Chord Quality > Diminished, and set these options however you like: 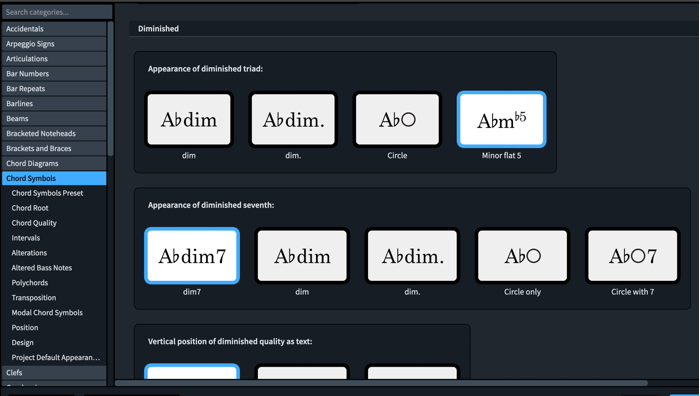 I still find it a bit irritating, that the symbols might “overlap” in the appearance of different meanings, like

It is confusing: chord symbols are not standardized in “the industry.” Dorico simply tries to respond to this lack of standardization in the best way possible.

Yes! But is there a way to define not only what his displayed but also what I have to right in the popover to male social chord symbols being diplayed?

and for all I´d like to have a special entry in the popover?

I can enter all the chords you listed. The last two of them are identical, therefore giving the same symbol. Is there a reason why you would like to habe Ab° and Abdim in the same project?

Once upon a time I learned that

Ab° is two stacked minor thirds and Ab°7 is three.
And in the screenshot above you can see that it’s possible to distinguish between the two.
Just type Abdim and Abdim7 into the popover…

Thank you for your help.