This option is there in Layout-bar numbers but doesn’t seem to work. It is switched on but the bar number is still visible.
Or am I missing something?

This hasn’t happened to me; I just tried turning it off and on again, and it works as expected. Can you post a zipped Dorico file as an example?

Test Chor mit Dorico.dorico.zip (358 KB)
here is one example. The bar number 3 shouldn’t be visible because of the rehearsal mark but it is visible.

Thanks for the workaround.
So it didn’t work for you ever with the “hide bar number with rehearsal mark” setting in layout option?

I don’t know if this is the intended behavior, or if it is a bug. If the rehearsal mark is to the right, then it doesn’t collide with the bar number, so maybe Dorico thinks it’s OK to keep the bar number visible. 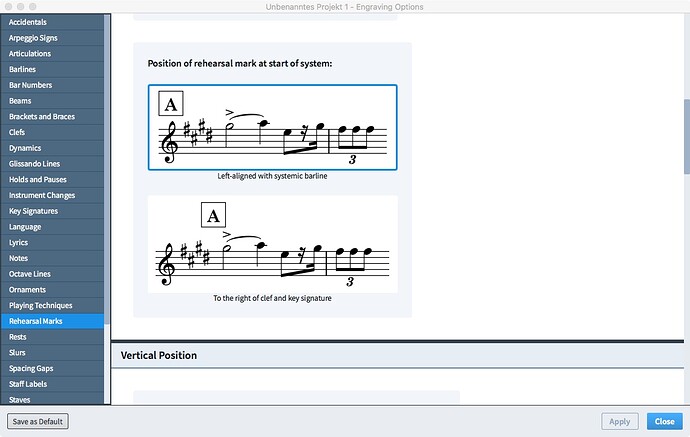 Thank you Stephen for investigating your time for that issue.
In fact the setting “to he right of the clef and key signature” wasn’t set be me but it was the default setting of Dorico when I tested the vocal manuscript paper of Dorico. And also when I imported an xml file this was the standard setting.
It is in any case irritating that we have a setting and it doesn’t work as expected. Thus I assume it’s a bug.
Thanks again for your help.

My assumption was that the option of hiding the bar number when there is a rehearsal mark should also work no matter where the rehearsal mark is aligned to.