I’m running Dorico 4.1.0.1076 (Dorico 4) on OSX. When importing a flow into my current score template I’ve discovered that during the creation of the new flow, 2 staves consistently swap musical content.

To clarify, my current orchestration/copying gig requires 2 strings passes, Short and Long. To acheive this I’m duplicating Flow 1, by importing it into the same Dorico document as Flow 2, then stripping out all other instruments and copying the strings overdub material into my preferred staves. In ‘Setup’ I then disengage Flow 2 so its not shown in the score and all other instruments but the strings. The end result is a score that shows the strings long and shorts, vertically on the page and strings shorts and long as continuous, left to right, material in the strings parts.

Anyway, what’s intriguing is that on import of Flow 1 to Flow 2, using the “Merge with Existing Players Where Possible” feature, (Flow 1 and Flow 2 are to be identical and use the identical score configuration) Flow 2 is correct except that, in my template, Vln I B and Vln II B swap material. This has occurred consistently across multiple charts/documents, though noting each document has been born from the same master template.

‘Import Flow’ is a great and important feature for Dorico’s workflow, but this is a currently a cautionary tale for its users to proof everything carefully. Hopefully this Flow Import has the bugs sorted out sometime soon by the Dorico team.

For reference:
Here are the last bars of Flow 1: 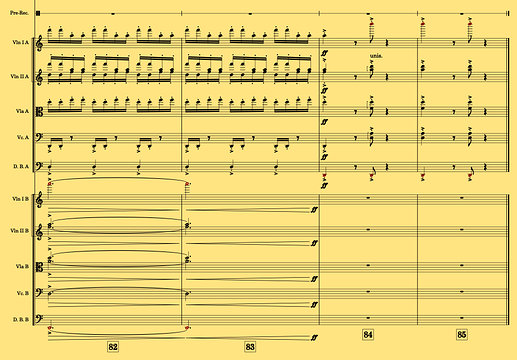 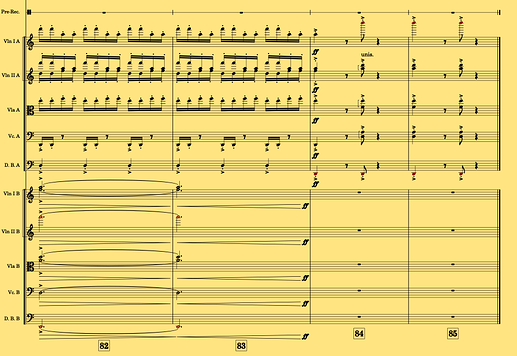 Why? What you describe appears to be an incredibly convoluted workflow.
Is your source material created in a DAW and exported as an XML, or are you creating all material in Dorico?

Hey Janus,
Its very likely the workflow is convoluted but that’s not the point here. The point is Dorico’s ‘Import Flow’ is buggy and needs some more love.

It needs to be tested whether this is something that happens with any project of two string groups, or if there’s something unique to your template. I can’t replicate this in a project I’m working on. Might you have changed the original order from the order they were created?

You might need to supply the team with an example document.

Anyway, in the meantime, you can duplicate a flow just by right-clicking on it. 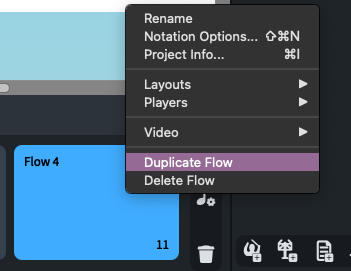 A user recently sent a project to us with precisely these same symptoms. The problem in that case was that although the players/instruments are in the right order in both projects in terms of their score order, the second instrument was created before the first, so they ended up with internal identifiers in the opposite order to that which Dorico was expecting. Dorico isn’t correctly taking their actual score order into account, so instead it ends up using those internal identifiers to decide the order in which to assign music when importing flows. We’ve fixed this in our internal builds, so this problem will be resolved in the next update when it comes.

Thanks Daniel, I’ll keep an eye out for the update.

Thanks for the recommendation Ben, only having just migrated across to Dorico I’ve not found an efficient workflow as yet. This however is extremely helpful! Cheers!