I’m right now working on a huge arrangement project, 26 christmas songs for choir, rythm section, brass and strings - all in one project.

This involves lots of transcribing stuff from recordings.

Just want to share one of the real time-savers that makes working with Dorico great: The ability to work with video tracks.

Of course, when transcribing songs i don’t actually need video, just audio playback - but until we can work with audio background files in Dorico, this is my workflow:

As said, this saves lots of time. Still, things could be easier:

All thumbs up to the great Dorico team! Looking forward to future featurest for making transcribing even easier.

What about you guys, what’s on your Transcribing with Dorico wishlist?

Yes yes yes! At the moment, I’ve got the file open in audacity, and constantly switching. Pressing play accidently in the wrong program is a real headache! This is a great idea. And I support wholeheartedly any plans the team have to make transcribing easier!

What about you guys, what’s on your Transcribing with Dorico wishlist?

Note-first input!!! Transcribing is so much faster in Finale where I can just figure out what the notes are and then immediately input them without leaving the input cursor. In Dorico, obviously any time I touch the MIDI keyboard it is going to input notes if the cursor is active. That means anytime I need to use my keyboard to transcribe the next phrase (or sometimes even transcribe just a single note in a difficult to hear passage) I have to leave the input cursor, figure it out on my MIDI keyboard, then re-enter the input cursor to input, then leave again, etc. All this entering and leaving the input cursor is just way slower than note-first input where I never have to leave the cursor the entire time I’m transcribing.

Honestly, I usually just leave Amazing Slow Downer or Transcribe! open while transcribing into notation software. Both are already great transcription tools and I’d rather see the Dorico developers spend their time to improve notation elements rather than incorporate transcription features. Just my $0.02.

Fair enough. But displaying a waveform would be cool? Maybe they could grab that from cubase? If it’s not too much work, I’d love to see that.

Pitch-before-duration. Pretty please. But I’ve requested this so many times that I’m in danger of trolling…

I would absolutely love to import audio for transcription, but this has been requested many times.

Here’s one: the ability to set a different rhythmic unit for the metronome. When I want to slow down a section, I click on the metronome… and it defaults to quarter notes. Even if I was in 6/8. Then I have to do maths.

@theduke: Yes, speeds up the transcribing flow soo much…!

@FredGUnn: Yes, I agree that the current input style might be less ideal. I have two 88 keys, one midi controller in front of me for Dorico input and one piano on my left for messing around, rehersing, trying out passages…
My main point regarding the trancribing flow is just accing mp3/wav/* attachment as an alternative to video file attachment. All the main functionality is already there.

I really LOVE the way I can transcribe in Dorico - it has really made that whole process so much easier (and faster)
Sure there are more improvements that could make it even better but I have to agree and give props to the Dorico team - this has been a great tool for me when I need to transcribe!!
My challenges still seem to be around getting it to sync with varying performance timing but I can usually get things close enough that I can here what I’ve written along with the actual recording (via video file of course) that things make logical sense.

I have two 88 keys, one midi controller in front of me for Dorico input and one piano on my left for messing around, rehersing, trying out passages…

Yeah, that would eliminate the need to constantly be entering and leaving the input caret. Unfortunately due to space allowances (well, and budget) I’m only going to have one 88 key MIDI keyboard attached at my workstation. If we are requesting features that would make Dorico better for transcribing, then virtually all the features of the other programs I mentioned would be necessary for me to transcribe fully within Dorico. Features like adjustable speed settings, variable programmable EQ, looping settings, various types of spectrum analysis, etc.

Here are a couple of pages of McCoy Tyner’s classic solo on “Blues on the Corner” that I transcribed about 3 weeks ago when I was teaching pentatonic substitutions in my Advanced Improv class. This still took me a while (8 pages - 6 choruses) but would have been even more time consuming without using the tools mentioned above. I have some friends with ridiculous perfect pitch that could probably have done it without, but I transcribe a lot and rely on those features. Dorico would need to incorporate those types of features to be an “ultimate transcribing tool” IMO. 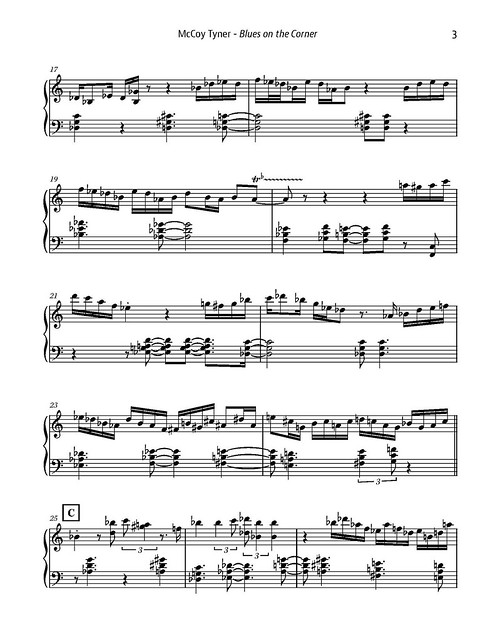 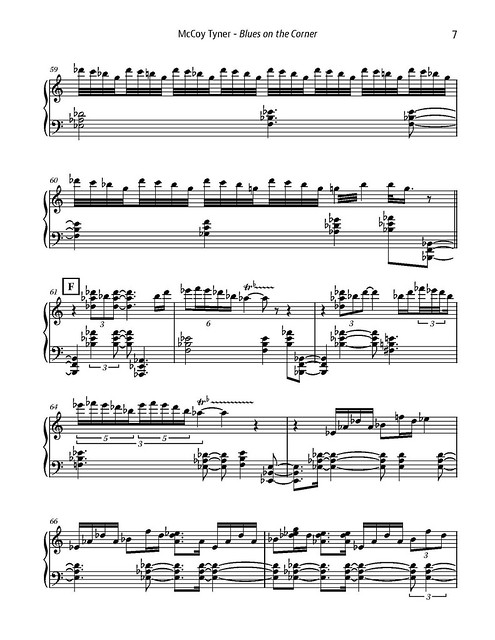 I use Reaper to do the audio, and I’ve mapped a few hotkeys using Autohotkey so that I can control it from within Dorico. Wondering if it’s possible, using this video import method, to start and stop the recording (preferably with the option to resume from the same place each time, or from the stop position), without leaving note entry mode?

I use Transcribe. I’ve assigned global shortcuts to it. In this way I can play and stop the audio without leaving Dorico.
I think that could be very useful to import audio or stems. Many of us use Dorico to transcribe arrangements and this could really improve the workflow

We do certainly have a number of ideas for tools to help with the transcription process in the future. There are some technologies in Cubase that would definitely be helpful. This is not something I expect us to be working on in the immediate future, but in the medium term I am hopeful that we will be able to produce some pretty good assistive functionality in this area.

I use the video track too. I import audio in Logic, set the tempo and tempo changes and export the audio into a movie and a midi file. In Dorico I can import the movie and the tempo track from the midi file, so it runs in sync. I mainly use it for additional arrangements on top of existing tracks. In my case some projects for pop-rock band with orchestra.

We do certainly have a number of ideas for tools to help with the transcription process in the future. There are some technologies in Cubase that would definitely be helpful. This is not something I expect us to be working on in the immediate future, but in the medium term I am hopeful that we will be able to produce some pretty good assistive functionality in this area.

Cool! If you are looking to implement transcription features, the following are some playback features I frequently use in Transcribe! or Amazing Slow Downer:

@Daniel As a first step, just being able to choose audio file attachment as an alternative to video would be great!

How much do we want to bet that as soon as Dorico provides for an audio track, some will start lobbying for multi-track audio?

Some people would probably like multi-track audio output, as well. If I have a sample library that was recorded in a real physical environment in surround sound, why can’t I export a surround sound audio file from Dorico?

(Note to Daniel: that is nowhere near the top of my wish list, but it is a real wish)

You can imagine the reaction of the “Let’s merge Dorico with Cubase” partisans to this.