Dorico crash when clicking on text in Property panel

Every time I select a tempo change object and click on the text “Final Tempo %” in the property panel, Dorico crashes. Also, I didn’t realise this was a switch, shouldn’t there be a switch before this text? 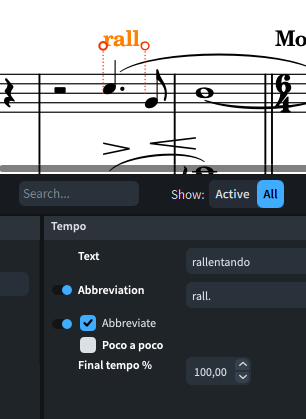 It doesn’t have a switch because a relative tempo object must always have a value for this, and there isn’t a ‘default’ that can be changed anywhere else.

Still there is the problem that Dorico crashes when clicking on the % symbol in what should be purely text.

Thanks for reporting that, André. Dorico shouldn’t enable or disable that control when you click on the label if there’s no slide switch shown there. I’ll make sure this gets fixed. I’m unable to reproduce the crash you describe, however.

Hi Daniel, here is a short video showing what is happening.

Thanks for the video, but unfortunately videos don’t help us to solve such problems. Please do Help > Create Diagnostic Report and attach the resulting zip file here.

Thanks, André. Would you be willing to provide me with your project file as well? You can send it to me via private message if you don’t want to attach it here.

Just want to add that I also had Dorico crash because of this input element a few days ago. But I couldn’t reproduce it at the time (I clicked it while Dorico was saving the file, so I thought it was just some coincidence and didn’t have the time to pin it down.)

In an attempt to recreate this crash, the following happened to me.