How well does Dorico work for contemporary composing in the lines of the following examples?

How good is the sound control for such projects? How do you control the triggered sounds?

Why would I choose Dorico for this task, in comparison to selecting Sibelius or Finale for the same task?

There are several contemporary things Dorico does not yet do: box notation, graphical elements, etc. However, custom noteheads are easy, as well as pretty much any playing technique you could want.

You really can’t do Threnody in Dorico. Search the forum for “graphical” and you’ll find some helpful threads discussing this development philosophy.

I’ll PM you a link to some contemporary scores I use when presenting Dorico, as an example of what it can do (I don’t have permission to post these publicly).

Why should you go with Dorico? Because the development pace is astonishing, and each new update brings a wealth of wonderful features. No, seriously. Finale and Sibelius are the industry stalwarts, but they’re dead in the water. Very little development, so what you have now is what you’ll probably have in 3 years, bugs and all.

Some of these, such as the Penderecki, will require so many imported graphics it would be quicker to do in a graphics app. Sequenza would be possible but with a lot of fudges (in D, F or S). All three programs are geared towards traditional notation (at least as far as notes on staves are concerned). There is at least a chance that Dorico will in the future be able to get close.

Just an observation… in 2015 I was on the jury of an international composing competition and we had 69 works submitted. Of those, 2 were handwritten and 2 were done in Sibelius. The remaining 65 were done in Finale, and very few of those revealed a sound mastery of the program. The market potential for Dorico is probably huge if Steinberg and the team have the resources and strength to cater for the composing avant-garde …

I’m sure that Dorico will implement most of these things in the future. The development speed is so rapid and comprehensive, and driven by Daniel and others who are capable of really understanding this stuff.

I’m sure that Dorico will implement most of these things in the future. The development speed is so rapid and comprehensive, and driven by Daniel and others who are capable of really understanding this stuff.

In your opinion, how frequent are these update cycles? How many do they release per year, in general?

It’s been a major (paid) version every year, late summer. And a number of very significant free updates in between.

In your opinion, how frequent are these update cycles? How many do they release per year, in general?

You can read the Version History, which shows you exactly what features have been introduced in each release.

And I’d say more than Finale 26 brought from Finale 2011, exponentially or otherwise.

Wow guys thank you so much for the information.

I wish the Cubase side of this forum answered as quickly and thoroughly as you guys in here.

The microtonal capabilities of Dorico are amazing - up to 12,000 divisions per octave, no hidden pitch bends or anything extra required. The accidental editor works great.

Am i right if i say the following:
adding a meantone temperament within Dorico for the piano so that you don’t have to use for example Helmholtz accidentals, is not possible, cause i would have to divide the octave in 19 tones - which is not possible in Dorico…or am i wrong with this statement?
I’d just like to write: ‘piano tuned in meantone temperament’ (or using a special key) with no further microtonal accidentals.

Can you explain a little further? How do you intend to display the notes on the page? Are you planning on only using 12 of the 19 pitches within each octave?

In that case I’m pretty sure your statement is wrong, then. Create a tonality system that does this: 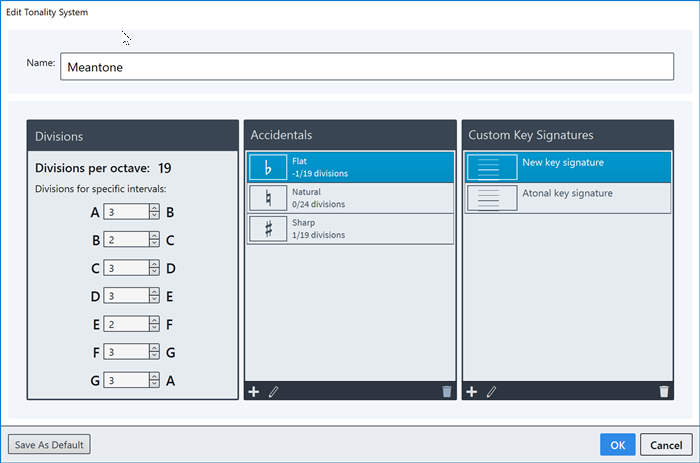 …and then to actually add it to your score, follow these instructions extremely carefully: https://steinberg.help/dorico/v2/en/dorico/topics/notation_reference/notation_reference_key_signatures_tonality_systems_changing_t.html

Thanx Leo…that’s of great help.
I just wonder: the distance in a meantone system of a whole step is 193 Cents and of a half step 117.

Point taken. My maths might not be perfect (I did fail A Level Maths many years ago, albeit mainly because I knew I was going to a conservatoire with an unconditional offer), but try something along these lines: 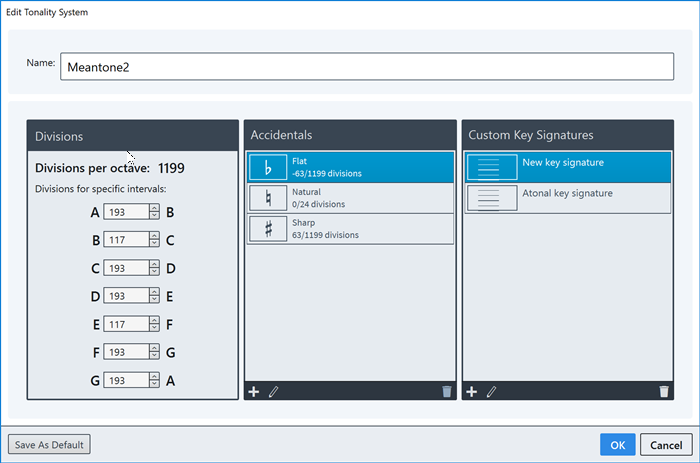 Hey Leo,
I don’t think that this changes a lot…cause u still divide the octave in 19 halfsteps (1999/63)…which would mean you keep the 3/2 ratio which would mean you are still at 126 for half steps and 189 for whole steps.
But probably I’m wrong with my maths here now