I came across triple staccatos while messing around with the Imperial March (Star wars - Suite for Orchestra, John Williams, Signature Edition) starting at measure 22. Does anybody have experience with that? Is the 3 over the triple dots mean the same thing as just the three dots with no tuplet number? The note value is a quarter note with a single slash.

Does Dorico have this articulation somewhere or can it be created manually?

Is this what you’re talking about?

I haven’t found a way to repeat the articulations on a slashed note automatically. Not sure if you can get it to work via a playing technique…

So I’ve managed to get somewhere close to this in the Playing Techniques editor: 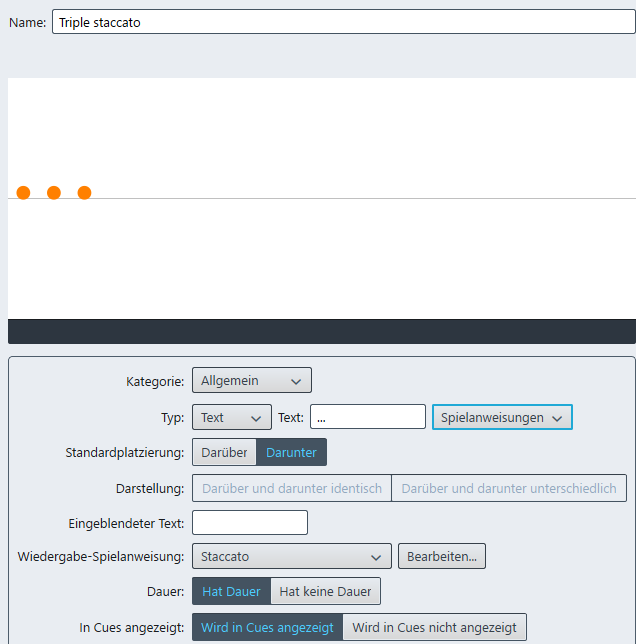 which is not quite the same thing (I don’t know if the rhythm dots can be hidden or if the tuplet number can be repeated, and I had to manually switch position of the dots when the need to appear above the notehead), but maybe someone who knows the PT editor better than me can help?

Those aren’t staccatos — it’s a shorthand notation, saying, “play three notes here on the pitch indicated.” I don’t think Dorico supports this, but it wouldn’t be as an articulation if it did.

If I saw those dots, I’d interpret them as staccato. The slash with the 3 would indicate the triplet slash. Why else put the dots on the first slashed 8th or the original written out triplet sixteenths?

Dear Julian,
I must say I agree with Derrek, but would be very interested in knowing why this would not be an articulation. If it’s not, it’s very unclear as a notation (the “developed” triplet shows three staccato notes to me, to be reproduced in the next “condensed” notes, that’s how I would read it).

Absolutely these are articulations. You’ll find this in the piano part for Rhapsody in Blue, for example. Bar 33 they are written in full (triplet semiquavers, each with a staccato mark); bars 34-35 they are abbreviated as Pietzcker has indicated.

Having battered my wrists with this section for over 40 years, I have always interpreted this as staccato.

Julian is correct. This is a repeated note structure. Common for Marches printed on small format paper (5x7 in US) to save space. I would not classify it as an articulation either.

It’s both. Brass band stuff from the earlier C20 used a three with dots as shorthand for triplets (similar with semiquavers), without it being an articulation. I think this came from shorthand used in early brass instruction manuals - which to some extent did mean to specify articulation. It’s also definitely an articulation in a lot of piano and string works.

Thank you Julian, Craig and Steve for that interesting information ! I start my week having learned something

It seems there’s a lot of disagreement over this sign, which I find very interesting.

The New Grove article by Richard Rastall, “Abbreviations,” says, “Dots over a note denote its repetition.” This article provides a musical example showing a half note with four dots over it, and then its equivalent, which is four eighth notes. The article does not mention these dots meaning any kind of staccato or articulation.

Certainly in Pietzcker’s example above, they would not seem to be staccatos, as the written-out notes don’t have any dots.

After rechecking the score, I agree with Julian - there are no staccato dots anywhere in that score of the Imperial March. Which I do find puzzling since I thought the tremolo slashes with the triplet marking should have been self-explanatory.

Is this what you’re talking about?

I haven’t found a way to repeat the articulations on a slashed note automatically. Not sure if you can get it to work via a playing technique…

Yes, that is exactly what I was referring to. I ended up spelling them all out as triplets though I had included the staccato but sounds like from the discussion that the staccato dot is actually not included even though in real life, this is probably going to sound a lot like it anyway with the quick back-and-forth bowing of this passage.

Great discussion, folks! Thanks for the insights!

As for the playing technique, Dorico would have to translate the number of dots in to some kind of tuplet (most likely) and play accordingly. Not sure if that is possible.

Maybe Daniel would have an idea???

After rechecking the score, I agree with Julian - there are no staccato dots anywhere in that score of the Imperial March. Which I do find puzzling since I thought the tremolo slashes with the triplet marking should have been self-explanatory.

That’s what was throwing me as well. I guess one slash means the next subdivision which is 16th and will be the basis of whatever tuplet is being defined. I guess the “3” and the three dots are redundant after it’s initially defined in the first part of the measure.

Hi folks. While whether it is an articulation seems to be controversial, the symbol must behave the same as a staccato. I simply found being a playing technique unacceptable as it won’t go inside the stave to line up with regular staccato unless manually adjusted note by note (a lot of work for a large passage). My point is that what you think it is in your score, either as an articulation or a playing technique, makes no difference. It’s important to group with similar symbols with the same behavior.

Also, if you take a look at Concerto for Orchestra mov. 2 by Lutoslawski, you will find the instances (flute) that the double dots are staccato (which is played differently from stroked notes without double dots, e.g. in strings). It doesn’t make sense to me to use double dots in addition to strokes to only indicate repetition but nothing else. Stroke is clear enough by itself to indicate repetition, additional symbols would be totally redundant for the same purpose.

If there’s an articulation you won’t use, you can open the Music Symbols editor, delete the glyph for that articulation, and add the multiple dots. That essentially re-tasks that articulation for your needs. It’s a workaround, but it works easily enough.

PS: you also need to allow that articulation to be inside the staff. Engraving Options–Articulations–Vertical Position–Advanced.

Thank you @dankreider. It works perfectly!

Wind not brass player here but I wonder if that is to indicate double/triple tonguing? That is more commonly used in brass instruments, but us woodwinds can do it too. In that case it is both a metrical and an articulation indicator. Really it can be no other way, double/triple tonguing is by definition staccato, you can’t physically do it otherwise, and you do get to pick the number of notes (please composers, keep it simple!)

Anyhow can’t say as I’ve seen the notation as us clarinets don’t often use the technique, but that’s my guess. Double/triple tongue has it’s own ‘flavor’ (sorry) of tone, so it would be an appropriate indication in the score to have, if that’s what the composer is looking for. With Dorico some libraries have it in the FX section (BBCSO does I think, probably EWHO too). Anyhow in that case it should be managed as an articulation. Check if Dorico has that already, indeed looking under Playing Techniques I see double and triple tongue with the dots, but they also add a half circle above them. It’s in the “Wind” not Brass category, presumably because all the winds can do it it (excepting maybe the double reeds, doubt you can pull it off there).

n.b. yes I recognize the triple tongue sound in the Imperial March from memory, with brass it has that great jackhammer kind of sound.

Also - be careful of quad tongue I should think, I never even heard of that, only double/triple. You see with each of those you do these tricky little tongue maneuvers, so arbritrary metrics aren’t possible. At any rate a quad would have to be two doubles, and would simply be confusing anyhow so just stick with doubles for that case.