Hello,
There’s a lot of different note heads available in Dorico.
Unfortunately, some are missing. Ex.: You can have a triangle note head but only upwards or downwards. I need it leftwards or rigntwards, but there’s only a square triangle available.

How can I draw my own note head and use it in my score.
Actually, I have the same problem with Clef design.
I cannot find the drawing program inside Dorico that allows me to do so.
If somebody can help?

There isn’t a “drawing program” inside Dorico.
There’s Engrave > Notehead Sets, which allows you to resize or replace the glyphs used for individual noteheads (amongst other things), and there’s Engrave > Music Symbols, which will allow you to do the same for clefs and many other items. Plenty of glyphs exist in Bravura that aren’t used by the program by default, and you can substitute these in as you wish.
There’s no functionality that allows you to take an existing glyph and rotate it 90° - you’ll need to do that outside of Dorico and import a .png or .svg file back into Dorico.
I don’t know of any program that can construct square triangles

There is a Smufl glyph in “String Techniques” that could be used in the Notehead set editor as a true sideways triangle.

Sure. You’re not restricted to what’s available in Bravura, of course - you may find that for arrows and triangles, other fonts have more complete sets. 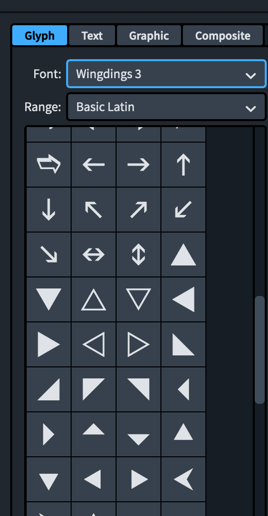 you may find that for arrows and triangles, other fonts have more complete sets

But apart from Bravura and Petaluma, where you can choose from an impressive list of (SMuFL) character subranges, for any other font the choice from Unicode subranges is fixed, and quite limited. You can’t, for example, access Hebrew or Cyrillic, and many other script and symbol ranges, even if the font has them.

It would be nice if this character range menu were dynamic, depending on what’s in the font, but I guess it’s not trivial to implement it.

That’s not strictly speaking true.
Create a new notehead, use the Glyph tab and add a regular roman character. Then hit OK twice (once to confirm the Edit Notehead dialog, and once to confirm the Edit Notehead Sets dialog.
Then go back in and open your new notehead again, and delete the glyph you’d previously added. Switch to the Text tab, click the Style dropdown and see that Dorico has automatically created a new font style for the font you previously used (which is Times in my case). 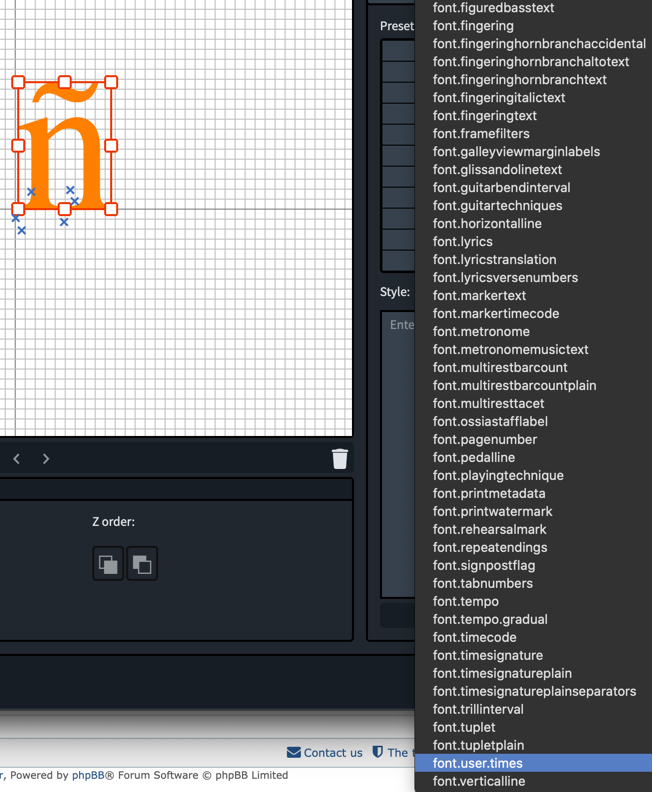 As long as you can type it, or copy and paste it as text, you can now use. 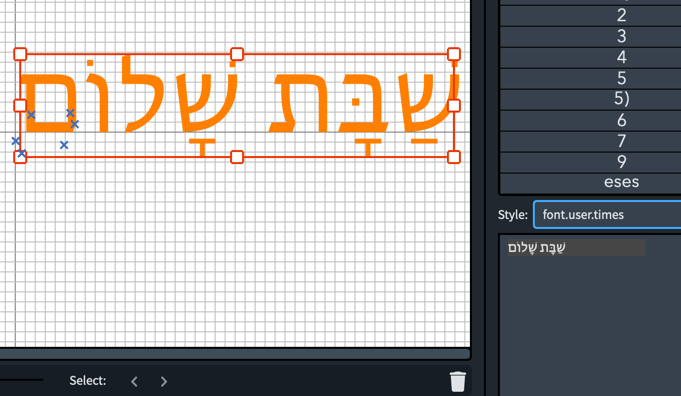 This applies to the Music Symbols Editor, the Playing Techniques Editor and presumably which ever Line editor(s) are/is relevant, too.

Furthermore, if you now go to Engrave > Font Styles, find the relevant new font style (which is called Times in my case), and change it to something else, Dorico will automatically update the Notehead/Playing Technique/Music Symbol like so: 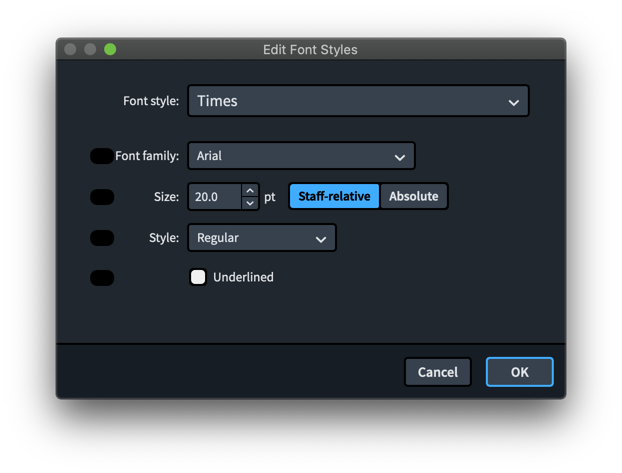 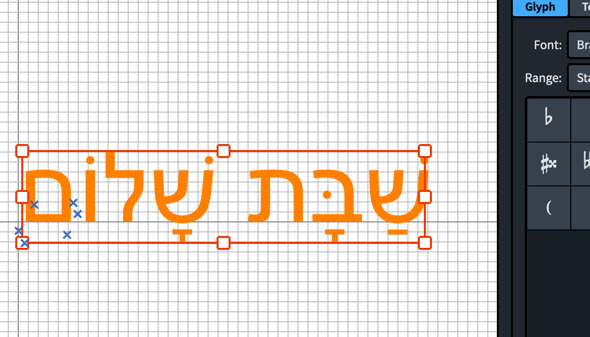 (This is a totally rubbish notehead example, obviously, but it’s timely given it’s approaching sundown on a Saturday here.)

Of course! There is such a thing as text input. Good to know, might come in handy. Thanks for the explanation.
(And while your notehead may be of little practical value, at least it’s peaceful

For what it’s worth, just this last week I happened to be doing some work on the notehead set editor, and I’ve added a means of specifying a range of Unicode code points in the Glyph tab in the various musical symbol editors, so that you’ll no longer be limited to only the hardcoded ranges provided up until now.

There isn’t a “drawing program” inside Dorico.
There’s Engrave > Notehead Sets, which allows you to resize or replace the glyphs used for individual noteheads (amongst other things), and there’s Engrave > Music Symbols, which will allow you to do the same for clefs and many other items. Plenty of glyphs exist in Bravura that aren’t used by the program by default, and you can substitute these in as you wish.
There’s no functionality that allows you to take an existing glyph and rotate it 90° - you’ll need to do that outside of Dorico and import a .png or .svg file back into Dorico.
I don’t know of any program that can construct square triangles

Thank you for your advice.
I succeeded in creating my extra clefs, in fact showing the place of the action (mostly for strings), and imputing them in my score. Hopefully the “aperçu” program on my Mac generates .png files so I could import all the desired drawings.
BUT I had to replace existing clefs with my imports. Do you know if there’s a way to CREATE new clefs?
I succeeded too in drawing some new note heads, BUT I had to stop, facing an unsolvable problem (for me!) : When I draw a new note head I copy an existing file, or open a new one, and draw my new sketch. I remarked, at the beginning that the new design had a red corner on the left upside. When I drew another new sign, and put it in the score, I realized that the previous sign was changed to the next one.
I came back to the file and restarted, being sure not to have any “red corner” object inside. Alas! the same problem occurred in the score!
Is there a (simple?) way of creating new note heads untied to others?

You definitely can’t create new clefs (or other Music Symbols), because Dorico wouldn’t know how to use them.

When creating notehead sets, the noteheadBlack notehead will always be added as a kind of placeholder. This notehead is the same notehead that’s used in the Default Noteheads set, so you shouldn’t edit it (unless you want it to be edited elsewhere). Click the New Notehead button at the bottom of the dialog, then, without touching anything else, click the Remove Notehead from Set button immediately underneath the highlighted blue notehead. This will remove the placeholder, leaving you with a notehead that is not used anywhere else. You can then edit this notehead as you wish.

Thank you very much. It seems to work perfectly now.
May I ask you another question?
I need to transform a note head into a line going upwards or downwards, but, in a succession of notes, each end of a line being connected with the beginning of the other coming line.That is to say that it expands (or shrinks) with the size of the page.
I wanted to show you an example, but I couldn’t find a way (yet) to join a drawing file. 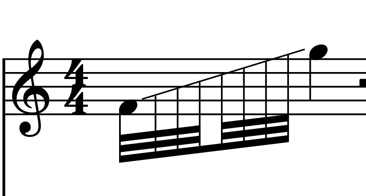 If so, you could use a notehead that’s scaled very small in the notehead editor, then use a glissando line (or any other horizontal line, now that that functionality is flexible). It won’t be automatically perfect in every case but it shouldn’t require much manual adjustment. It’s worth bearing in mind that if you entirely delete the notehead, it’ll be impossible to select those notes in Write mode, even using a marquee selection.

That’s exactly what I do too, Claude.

Thank you. I find the way of making a copy.

I hope you’ll see what I mean !
In fact, I don’t want to erase the note head for the (good) reasons you gave.
Therefore I wished to have a note head as a line, that could expand or shrink with the score itself, in order not to break the continuous line.
i.e. the bow brushes the strings up an down the neck.