I am running into a problem with dynamics humanization.

In Playback > Humanize, *BeatStress is set to zero, as is Humanize dynamics. Yet I am getting automated cc 1 and cc 11 variances between first and second notes of consecutive eighth notes contained in a single beat. (My Expression Map includes both cc’s for dynamics. This shows in the Dorico Key Editor lane as a Dorico adjustment. It is not a Synchron Player humanization (I have that turned off while trying to troubleshoot this problem).

I don’t understand what might be causing this. Attached are documenting screen captures. 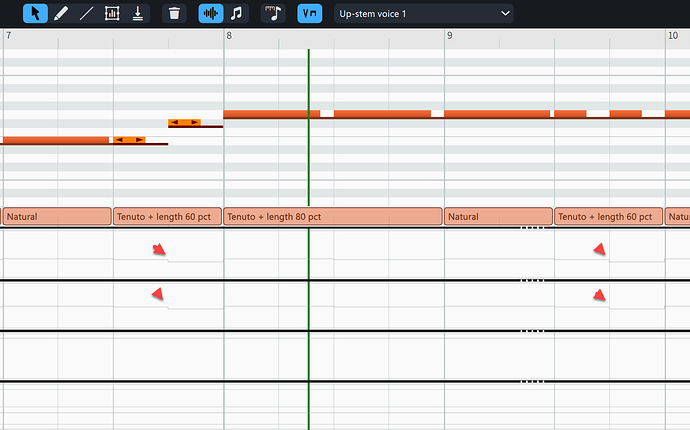 In case it helps…

If you look at the 4 s elite Violins 1-2 expression map, for example, and expand the Playback Options Override section in the Expression Maps dialog, you’ll see that many of the playback options are overridden, accounting for what you see in the Key Editor.

Ah, I’ll check that out, Daniel. Thanks for the heads up.

I can immediately see what you are saying… I have never really used the Playback Overrides section. It’s definitely something I should become more familiar with. Again, thanks!

perhaps you could just clarify something, @DaddyO – I thought these were EM’s you were creating yourself but if that was the case, you’d of course know you had made adjustments to the playback options manual overrides. Did the maps originate from VSL or something?

The maps are my own.

But due to a number of long periods where real-life has intervened (long story) I have not yet dug into a lot of the improvements and additions to Dorico, and the focused time to do so has become quite limited. This kind of thing stymies my Dorico progress.

I’m sure at one point I became aware of the EM-specific playback overrides section, but I’d plumb forgotten about it. The only EM-entry overrides (as opposed to global overrides) I have been using so far are mostly what’s open for viewing by default. Daniel’s catch showed me a whole area I will need to learn , when to use it and how to implement it.

There are other areas of Dorico even from version 3.5 that I have not yet fully explored. But I have made real strides with those aspects of EM’s with which I am familiar. This time around the EM’s I am setting up are working as expected.

ah, OK – I know the feeling! Thanks for putting me in the picture.