Exported mixdowns out of sync?

In the attachment, the waveforms in both of those tracks should start exactly on bar 2, but they’re way off from the grid and miliseconds off from eachother (it takes zooming in super close to really see the second part).

I don’t have this problem importing separate instrument tracks from FL Studio, those are tight and exact, so clearly it’s something to do with the mixdown export. I had this same problem with Elements 8 and just did my best to work around it, but I want to find a real solution.

If it matters, I’m using Windows 10 with a Scarlett Solo. Any advice would be appreciated. Thanks!

Weird. I have done this in the past and not had a problem. I’ll try this again, meanwhile Martin or Steve or somebody equally competent might see this and figure out what is going on…

Select the event and check the snap point, make sure it’s at the start - has caught me out a few times when importing audio 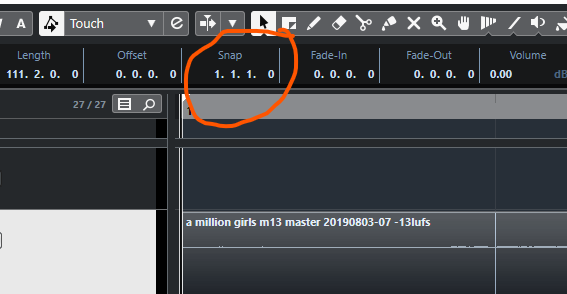 Select the event and check the snap point, make sure it’s at the start - has caught me out a few times when importing audio

Thanks, but everything is most assuredly all the way to the left.

I’m having this same issue and it’s driving me insane, everything is on snap to the grid perfectly, but when I bounce it it’s out of time, at the end of the audio that’s bounced is the start of the next piece of audio