Any advice, guidelines or tips for handling the text portion of scores and parts? I’ve seen plenty of it in my time but never paid much attention, and now I’ve got a tool where I can produce quality output I’m scratching my head as to what’s a good approach. Are there any kind of rough standards for this sort of thing?

Are you asking about score standards, or best practices in Dorico?

Your best bet for workflow is to define a paragraph style for literally everything. That way, you can make changes once that apply document-wide. And you can define key commands for common styles.

Sorry it wasn’t clear, best score standards, are there any (for the textural parts)? Or any house standards or favs people can share? For example I make a title page, how big should the font be? Is there a layout that should be used? I’m just guessing my way through this from memory of seeing many scores (which doesn’t help really since so many I’ve seen are historical)

I have a few house style guides. Obviously some of these might not be up to date and all were standards for other software, but these might be helpful. 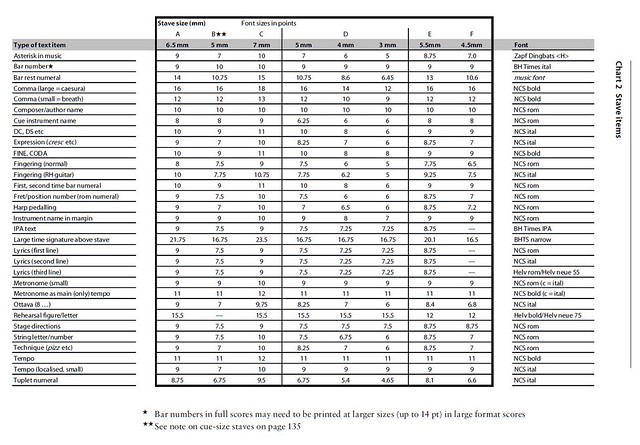 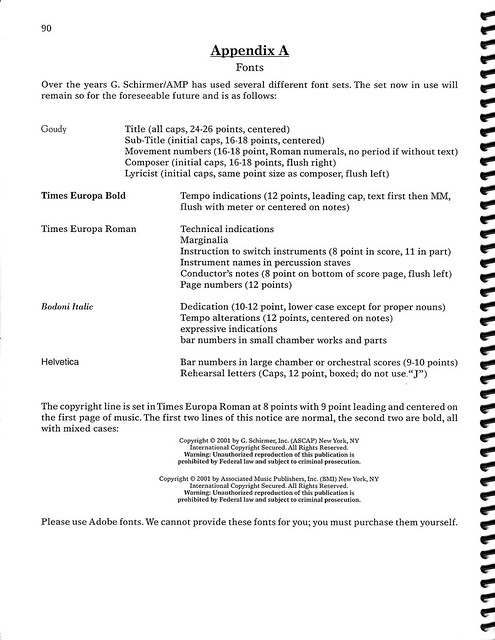 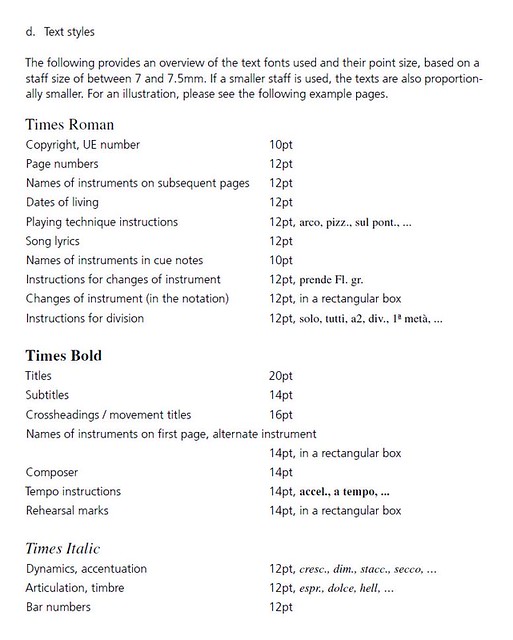 You can also just check out some reputable publishers and imitate typefaces and styles you like. Many have very good perusal sites online.
B&H:
https://www.boosey.com/cr/perusals/

Henle has a “look inside” feature for all new publications:
https://www.henle.de/us/search/?newpublications

MOLA guidelines are another good place to start: https://mola-inc.s3.eu-west-1.amazonaws.com/files/mola3/MOLA-Guidelines-for-Music-Preparation.pdf

FWIW, if you’re on mac, I really like “Iowan Old Style”. It’s a nice, classic font with a bit of character. It’s also very useful because there are multiple medium font weights in addition to the standards, which gives a little more flexibility.

It’s also very useful because there are multiple medium font weights in addition to the standards, which gives a little more flexibility.

For titles, I like Libre Bodoni. It feels like it can be either classic or contemporary. For the score, I always use Minion Pro. It has an excellent x-height, which makes it very legible even at small point sizes.

Great tips everybody! The MOLA guidelines are just what I need, in addition to all the font recommendations. In particular I noticed they say not to notate the harp pedaling - leave it up to the player. And I was just going to use the nifty new pedaling feature in Dorico

Which brings up an interesting point that Dorico makes it so easy to do many nifty things for the players, but we should be a little careful not to overuse that.

It’s also very useful because there are multiple medium font weights in addition to the standards, which gives a little more flexibility.

I have definitely found this to be true. Multi-weight fonts allow a certain flexibility whilst still maintaining a cohesive look.

Re: Dan, I tried Roman ionic for a while; sadly, the accompanying font weights have yet to be developed even a few years on now which turned me off.

For all the important bits at the top of a score I like to use Yana which is very elegant (and integrates well with Iowan) and has a mountain of special ligatures which can be very tasteful for certain projects.

I’ll be the party pooper in this discussion.

Keep in mind that if you share Dorico files with anyone else, the recipient must have any non standard fonts installed on their machine. Also, be sure to embed fonts when making PDF files to be sent to a printer. Ask to see a proof before any printing job is completed–check all text and musical notation thoroughly.

Just let me tell you this: years ago, when I published my first book about music theory (with hundreds of music examples) a professional graphic designer (no musician) gave the finishing touch to this book. One of the first things he asked me was if there is no other possibility than writing music in such an old fashioned way. Means:
All in all we have two possibilities:
Antiqua style (clefs, dynamics, etc) for »classical« engraving (e.g. Bravura, Norfolk, Opus, …) or some kind of a handwritten style for popular music engraving (e.g. Petaluma, …). All in all everything looks the same, doesn’t matter if its Scorlatti, Norfolk, etc …
But I don’t know any good options let say for a serious slab font version for clefs, dynamics, … or a music font for dynamics in a non-italic, non-serif style (like Gotham, Avenir, Futura, …) – Dorico doesn’t support to change the font for pp, sfz, etc easily yet.
So, I hope that there will come a professional typeface designer, who cares for a highly legible, modern new interpretation of our musical notation.
Maybe there is one and I didn’t realize it.
Does anybody know something?

You can change the dynamic music text font separately from the main music font - Engrave > Font Styles > Default Music Text Font. It’ll need to be a SMuFL font, though.

I think the graphic designer - who isn’t a musician, doesn’t have good insight into music design. He’s thinking in terms of purely how it visually looks to a modern eye. Since we’re so inundated with symbols and graphics, the modern style is streamlined. But for notation the visual appeal in that sense matters little. What matters is it’s ability to transmit information to a musician while playing, which is an operation that takes up a lot of bandwidth.

A lot of thought and energy has gone into this over the centuries, could it be improved? The measure of that would be “does it better convey musical information to the musician”. Again - your graphic designer is thinking in terms of a general person looking at this, not a musician. And yes a musician obviously needs conformity in design, because it’s all in the autonomous system. Last thing I want is some new streamlined clef system (it’s been done) - what’s the point? The ornate clefs trigger an automatic response in my brain. General typology is about making information available to the uninitiated, that is some random person who might see it. Music is only intended for the experts.

So no, he doesn’t know what he’s talking about AFAIK. I used to be a physicist, should we change all the mathematical notation too so it can look better to the average person too, who wouldn’t understand it anyhow? Yes, let’s find a new font for Einsteins general field theory

some kind of a handwritten style for popular music engraving (e.g. Petaluma, …). All in all everything looks the same, doesn’t matter if its Scorlatti, Norfolk, etc …56
But I don’t know any good options let say for a serious slab font version for clefs, dynamics, … or a music font for dynamics in a non-italic, non-serif style (like Gotham, Avenir, Futura, …) – Dorico doesn’t support to change the font for pp, sfz, etc easily yet.
So, I hope that there will come a professional typeface designer, who cares for a highly legible, modern new interpretation of our musical notation.
Maybe there is one and I didn’t realize it.
Does anybody know something?

Traditions stick, because people are comfortable with what they know. Things are easy to read when they are familiar. Hence, jazzers insist on reading music prepared by computer that is designed to look like it was done by hand.

Novello used to use a block slab serif for their dynamics. The closest to it I’ve seen is Berthold City Light Italic.

Any designer coming up with alternatives has got to introduce something that solves a problem, or makes it ‘better’ in some significant way. You could use Helvetica Bold G and F for clefs. But … why?

This sort of discussion remind me again of the differences in perspectives between music as sound and music as visual art (that is, a really esoteric-looking and elegant printed score).

A significant percentage of my life is indeed spent making things look beautiful on the printed page, and I do care about that deeply. But it’s easy to forget that, in the end, it’s about the music that comes to life. The score is the means, not the end. That means simply a clean, legible, not-confusing score with smart page turns. Fonts are secondary, IMO.

It’s similar to the principle of mixing on a DAW vs. mixing on a console. With the former, you’re tempted to be influenced by what you see on the screen: I see I notched out the low-mids because the screen tells me, so my brain might imagine that I actually hear the difference, even if I actually don’t.

But watch a guy like Chris Lord-Alge, and he’s not mixing to a screen… he’s listening. Because in the end, the sound is the point.

… a professional graphic designer (no musician) gave the finishing touch to this book. One of the first things he asked me was if there is no other possibility than writing music in such an old fashioned way.

If he was not a musician, I would ignore his advice. Music notation isn’t just “something that looks interesting.”

Try picking a random text font from https://www.1001fonts.com/text-fonts.html, then ask why he wants to change your book to write the words in an “old fashioned way.”

I totally agree with what you are saying (ok, with most of it, not all …). But IMHO its always interesting to have a serious, professional look on our stuff from outside. Thats it. It’s all about: am I always sure of my opinions or do I gain certainty through constant discourse?

Every professional – really professional – graphic designer knows about the function, needs, problems and (dis)advantages of graphic, typography, etc.: legibility, guide the eye in a certain speed, how to catch somebody, reading speed, focus on content, not on externalities, aso … Thats what they have studied. And I also think, that they know about the importance of a long-established notation practice. I am sure.
He didn’t mean, that it should look more »interesting« or more fancy or whatever. It was the deep question about the possibilities of a modernized music typography.

You described him as “no musician”. Why do you think he’d know the ins and outs of notation?