Feature request: rhythm notation above staff that works like ossias

I’ve just finished transcribing a fairly long book of leadsheet arrangements into Dorico (I was using 2.1 - 2.2 came out just after I finished, which would have saved me a lot of time on Codas etc … never mind).

I had to do a lot of these rhythmic figures above the staff, which are pretty common in New Real Book-style leadsheet writing (see attachment). I was generally happy with how they came out, but the process I arrived at was pretty laborious. Create the figure in a slash voice, then select it and filter only notes so that you can adjust the slash position, then filter it again to only rests so that you can adjust the rest position, then put the whole thing in cue size with small slashes and hide the leger lines, then manually tweak the stems in the melody voice (which will default to either upstem or downstem depending on the voice you create, but which should ideally just follow single-voice stem rules beneath a figure like this).

There are various ways that could be made easier (like, for example, an option to force stems to behave as if there were only one voice), but the dream way of doing it would be to make it behave like an ossia. Select passage, select staff > add ossia above > enter notes > done. If only an ossia could be defined as having no lines (and maybe one or two other options to do with where and how chord symbols appear), it would be pretty much perfect as it is.

I think this would be simpler to do with a cue.

Thanks Andgle, that’s definitely a better way than the one I was using. I didn’t know about the ‘rhythmic cue’ option, which makes all the difference. If the hidden rhythmic cue staff is only used for rhythmic cues, then you can use the same slashed notehead throughout without too much work.

It doesn’t seem to solve the stem problem, unfortunately – putting a rhythmic cue above the staff appears to force the on-staff voice to stems-up (somewhat counter-intuitively), so it’s necessary to manually flip stems if you want them in a default one-voice direction.

Edited to add: the stem direction for the melody voice is either up or down, depending on whether it’s an up-stem or down-stem voice. In other words, the cue behaves like it was an extra voice, which is not the convention if the New Real Book is a guide (see attached).

A bit more experimentation and I’ve found a couple more tricks to make this easier:

By using an unpitched percussion instrument (I’ve chosen Snare Drum) as your ‘rhythmic cue’ instrument, the cues will appear as rhythmic cues by default without having to select the property.

You can edit the default playing techniques of the snare drum and choose the notehead set for small slashed noteheads, so you don’t have to change them in the score.

By changing the abbreviated name of that instrument to nothing, you can avoid having to enable the ‘start text’ property each time. If you want to select the cue, there’s a spot just above the first note that you can click.

…you can remove rests from Layout options > Rests > Bar rests in cues.

I don’t see a “Rests” category in Layout Options. Am I missing something, or is it actually somewhere else? 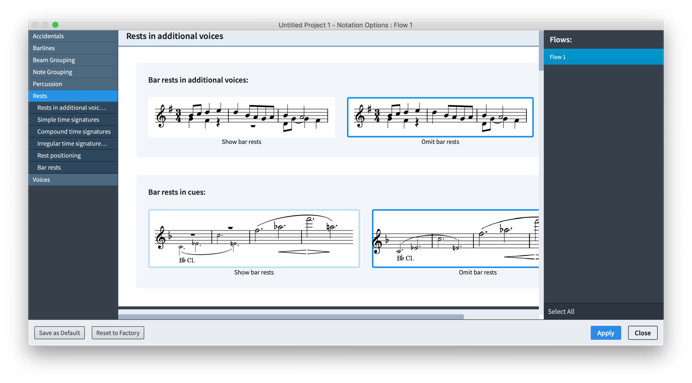 Wow, I am thrilled with this. Thanks, tuba, et al. I had been using an extra slash voice, but it was a mess. This is great!

Question along these lines: I’m using this method and generally having good success. But the stems are too long for my taste, and they’re forcing all the chord symbols far above the staff.

I know I can set the vertical position of the rhythmic cues, but is there a way to shorten the stems in the cue notes? I can’t figure out how I could easily do this, let alone globally.

I can’t see global options for stem lengths of rhythmic cues, but locally it’s exactly how you’d expect: by grabbing the stem in Engrave mode.

And, somewhat unsurprisingly, you can marquee select a load of them and set make a wholesale change to their “stem adj.” properties 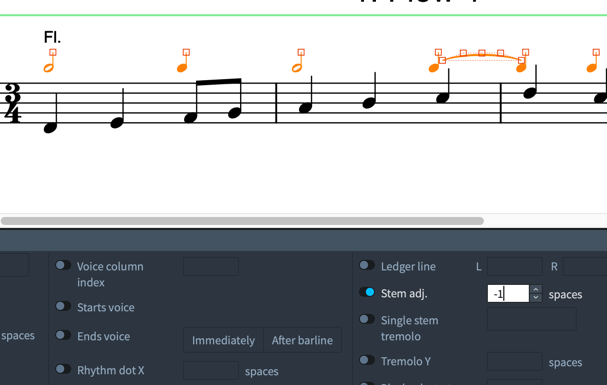 And, somewhat unsurprisingly, you can marquee select a load of them and set make a wholesale change to their “stem adj.” properties

Not if the notes in question are beamed together, apparently. If they are, stem adjustment seems to have no effect.

Indeed. Select the beam and either drag the ends or fiddle with the “Start Y Offset” and “End Y Offset” properties (in the Beaming section).

Thanks, this brand of fiddling is new to me.