Not sure if this belongs here, but the only thing I have is the UR44-C and install all the “Tools” and latest driver. Mac OS Ventura (13.1). When I launch Final Cut Pro, I get a message box about Incompatible Audio Units Found - “2 Audio Unit plug-in(s) which did not pass Apple AU validation.” Now, I probably don’t care, but something is wrong. I don’t use these plugins in FCP or Logic, and don’t use Cubase, so I’d be happy just excising them some how. 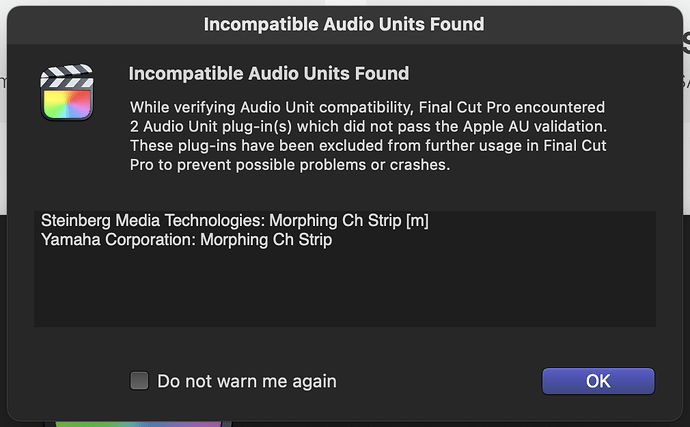 I’d be happy just excising them some how.

You do understand that that’s what the the dialog box is telling you it did?

I’d like to remove them from the system is what I’m asking. Telling FCP to ignore them is not quite the same thing, though I’ve checked the checkbox, of course.

I think it’s a s simple as removing the plugin files.

Check out this article:

Location/file paths of presets in Cubase and Nuendo

The charts below show where to find presets (among others, plug-in, channel strip and FX chain presets and project templates) used by Cubase and Nuendo . If needed, the preset files can be copied f...