Font issues with Dorico Elements 3 [not yet solved]

I am on the road with my MacBook Pro with Dorico Elements 3 installed.

Issue No. 1) If I open a file, on which I have worked on in Dorico Pro 2 from my desktop computer, Fonts do not turn out as in the original file. My Lyrics come out in some sans serif font (where as the original one was Academic definitely).

How can I keep on working? Any hints and tipps very welcome.

For number 2 go to Edit > Device Setup and select an audio output.

Also in the Halion window sounds do not load if I Load sounds for unassigned instruments.

That suggests that you did not download and install the “Dorico Elements 3 Sounds Installer” package.

If you are sure that you did, then please create a simple piano project with a couple of notes and then choose Help > Create Diagnostic Report.
That creates a zip file on your desktop, please attach it here.

thank you for your helpful answers, things are sorting themselves out.

I am on the train doing some edits with Dorico Elements 3.
I open a project, which I had worked on with Dorico Pro 3 on my home computer. The actual file is stored and synced via iCloud.

When opening the file with Dorico Elements 3 I will get the Missing Font Dialogue, in specific the missing Font Simoncini Garamond. This font is installed on both computers, but also on both computers I have Dorico set to use Academico.
What is going on?
I never want to see that dialogue again (because it claims something which is not true!) but have not found a solution so far …

I suspect, there is a bug in the Dorico application (or in using the Pro and the Elements version alternatively).
How can, if I start a new project in Dorico Pro (where I have searched all Font Styles and all Paragraph Styles for any traces of a Simoncini Garamond font - there are no traces!) and later open the same project with Dorico Elements, the application claim a missing font?

You can switch off the warning in Preferences.

If you want a solution to the specific problem, you need to provide the project file itself.

Simoncini must be used somewhere in the project, even if it’s not in use on the actual page. By somewhere I mean that either a Font Style or a Paragraph Style is overridden to use this font, or there’s a Playing Technique that uses text or a glyph from this font (the clue for this is that under Font Styles there will actually be a style called Simoncini, not that you can see that in Elements).

If it’s not causing you problems aside from the irritating dialogue, turn off the dialog by unchecking this preference: 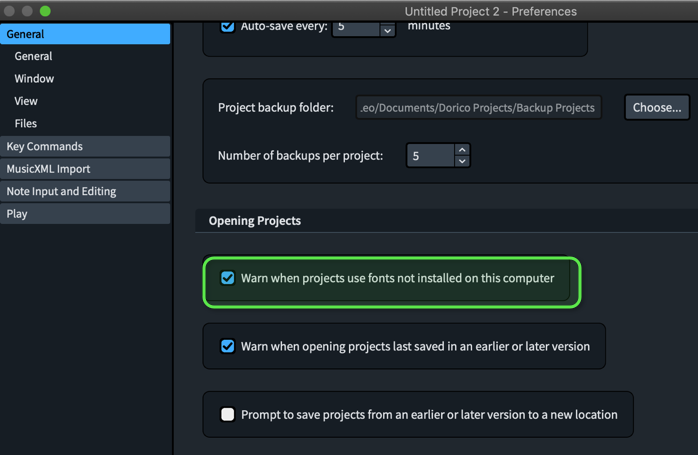 Thank you Daniel and Leo,

as last resort I will switch off the warning.
I am rather more interested in solving the issue.
Leo, your hint with the playing techniques I will follow once back home.
And I will also provide the specific file with these problems.

If you want a solution to the specific problem, you need to provide the project file itself.

Thank you Daniel, I have posted the file via email.

Today I started a completely new project in Dorico Pro 3 and was wondering, why the text looked a bit different. A check at Engrave Mode->Font Styles… showed this Simoncini font being the Default Text Font…
I had to change it to Academico and everything was fine. Strange behaviour - as Academico is the Default text font family set in my Doricos Preferences…

a) I open Doricos Prefernces to check the Default text font family (=Academico)
b) I start a new project, go to Engrave Mode and check the Font Styles…
c) here Simoncini is at prominent place - why?
d) I change the Default Text Font to Academico

I know I owe you a reply to the emails you’ve sent me, but the answer is presumably because at some point you have clicked the ‘Save as Default’ button in the Engrave > Paragraph Styles dialog to save Simoncini as the font for your default paragraph style. Try removing the userLibrary.xml file from /Users/your-username/Library/Application Support/Steinberg/Dorico 3 and then create a new project. You will find that it will not use Simoncini as its default paragraph style font.