tracks.JPG1920×532 126 KB
As depicted in the above attachment, each track contains a single audio part:

The first audio part is the result of record-enabling the first track, and then recording a blank signal from my UR22 interface. I didn’t expect any low-level noise from the UR22 given the fact that nothing is plugged into it at this time. It’s just sitting there on my desk with no connections other than by USB cable, which transfers data digitally and so isn’t affected by noise. It would appear that the noise is coming from within Cubase.

The second audio part was created using the same means as the first, except this time, I filled the first insert effect slot in its respective track with the Gate plugin provided with Cubase. The settings I used within the Gate plugin are depicted in this attachment:

The third audio part was created in the same fashion as the previous two. Instead of applying the Gate plugin in real time via an insert effect slot, I decided to apply it to the resultant audio part itself post-record. Here, Gate appears to have eliminated most of the noise, but not all of it for some reason.

1b. The insert effects on a track have no bearing at all on what is recorded. Only if you add them to the input channel inserts which I don’t think you have done.

Regarding your first answer, it may just be the resolution of the project window making the noise seem louder than it is. Here’s a screenshot of the second audio part in the sample editor:

sample.JPG1919×669 91.6 KB
The noise doesn’t sound loud at all. To tell you the truth, it’s negligible and I wouldn’t worry about it at all if I were focused primarily on sound quality. However, I was trying analyze incoming audio and I was concerned that the noise may be interfering with my figures since it’s seemingly random and unable to be accounted for. I was hoping that there was some way to eliminate the noise if it were coming from Cubase, so that I could reliably test the fidelity of my audio system. Specifically, making sure that an audio file remains untouched when played back.

I’m not totally sure on this, but I think I’ve used my UR22 before and had no noise show up when recording nothing. That’s why I posted the question. If you’re right regarding when insert effects are applied, then my test basically proved nothing interesting. As a matter of fact, I’m pretty sure I’ve had insert effects wrong this entire time actually. If an insert effect were applied to audio during recording, and any audio parts on a track were subjected to insert effects upon playback, then any track containing an insert effect would apply that effect twice over to recorded audio: once during the recording process, and once again upon playback. It would be pretty cumbersome removing all insert effects on a track just to lay down another piece of audio, only to reconfigure them once again. I was probably just confused by the word “insert”.

Anyway, granted you’re correct on that front, it would mean that the noise I’m seeing on the second audio part, I’m not supposed to be hearing by virtue of the Gate plugin filtering it out before it reaches the master track. I wish I could trust that this is what is going on, but based on my second question, it’s taking multiple doses of Gate before the noise is deleted. It looks like every dose removes half of the remaining noise, although once I reached the seventh audio part, the noise looked as though it hadn’t halved. If I keep repeating this, eventually – after about 5 or so times – the noise will reduce slightly. For whatever reason, if I apply the process from within the sample editor, I get better results, although still not perfect. Using a newly recorded audio part, I hit Ctrl+A to select the entire audio event, and process the audio with the Gate plugin:

after.JPG1919×669 90.6 KB
Using the noise removal process from within the same left-hand panel in the sample editor, I get even better results although there are still some artifacts at the very beginning of the audio event.

I’m starting to wonder if any noise it being recorded at all. Perhaps it’s a graphical issue? If I record a standard drum loop and apply the Gate plugin, it works fine eliminating any hi-hats, kicks and snares below the threshold – sounds that are louder than the low-level noise which is why I’m surprised it’s not eliminating it as well. Wondering if there’s a glitch or whether I understand gating enough?

Thanks for the response by the way.

If it’s negligible noise then it is probably the self noise of the interface preamps…Not sure if they gain down to infinity anyhow so even with gain at zero they may have some gain applied.

If you want to zip and upload the project with just the one audio file (track one) I could probably work out what’s wrong with the gating.

If it’s negligible noise then it is probably the self noise of the interface preamps…Not sure if they gain down to infinity anyhow so even with gain at zero they may have some gain applied.

If you want to zip and upload the project with just the one audio file (track one) I could probably work out what’s wrong with the gating.

There’s not much to the project as I was just experimenting. The problem presents itself even without my template, so to keep things simple I uploaded a minimal project based on the “Empty” template from the Steinberg Hub:
Gate.zip (1.82 MB)
Try messing around with the Gate plugin on the recorded audio part. See if you get the same behavior. The problem has basically become: “Can’t tell whether or not low-level noise is removed by Gate plugin as an insert effect.” This is because applying the same plugin to pre-recorded audio doesn’t even completely remove the low-level noise from the audio clip. There are significant artifacts still left lying around after each pass – not that a gate should require passes right?

Well I have to apologise for my previous answer…it would appear there is actually something wrong with Steinberg Gate. It works with a soft start gradually fading out the noise in the first second or so and no setting will fix it as far as I can see.

Third party gates do not exhibit the same behaviour. They work as you would expect.

That aside… the noise you have there is reaching -60db and more - This is pretty high and is also not the steady hiss/hum you would expect of a preamp. Assuming the preamp gains are down? I would expect to see -90db or less noise.

You should investigate possible causes of this and see if you can rectify (or at least improve) at source. Could be dirty mains, the usb, the computer itself, the location of the unit or the cable picking up interference.

You can easily see the levels in control room meters. See if you can make any improvement by moving the unit perhaps (click to reset the max figures) 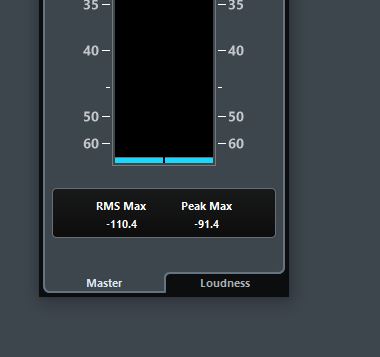