Hi, does some Dorico and Dropbox users get errors while trying to save Dorico file with specific German letters ö, ä, ü to some Dropbox folder? It shows an error on my MacBook Pro - files could not be synced, because some kind of sighns like / ! are not allowed. By the way Dropbox syncs it properly regardless this error message.

I did a test with Word document, and there are no errors. I did a test on other MacBook Pro - another Dorico SE user, another Dropbox account. The result is the same. Word doc - no problems, Dorico doc. - error message.

I am in conctact wih Dropbox support to solve this problem. Any way Dorico team could might concider to contact Dropbox team directly as well, as this is also Dorico specific issue.

I am curious to know if somebody els has this problem😊 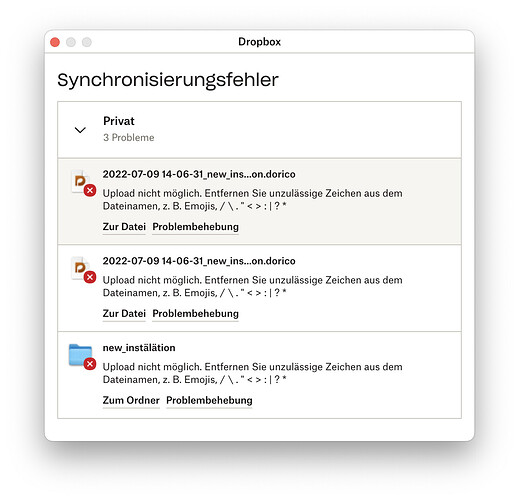 I have every dorico file in Dropbox and never had any problem.

I advise you to use ae, oe and ue instead of ä,ö,ü aswell as ss instead of ß in file names as it’s just better style. Why it seems to work with word and not with dorico-files I have no idea…

Thank you for your replay. Of course I could use ae instead of ä, but it is some kind of automatic thinking, when you write in some particular language. As I said before this issue persist only approx. 1 year. And I use Dorico with Dropbox since Dorico was born. Even Dropbox team recognises it as not a normal behaviour.

Could you tell me are you on Windows or macOS? It could be an explanation, because 2 laptops with identical macOS but different Steinberg and Dropbox accounts produce the same error…

That’s obviously a problem of Dropbox…

Their help advises you to avoid these characters.

Yes, they help and advise - but there are no german letters at all in these advices😊
Just opposite. Look at the name in their example at the last file😊

Anyway its still interesting why does doc (.docx) show no errors and .dorico does.

I deleted my Dropbox account long time ago, so I can’t test it myself. Using OneDrive, even with Boxcryptor in between, I have no problem like that. Might be the Dropbox driver treats characters different than other Cloud syncs.

Is the error only with updating the file or is it also when you upload it for the first time? Is the error also existent with .txt-files? And have you tested both .docx and .dorico files from the same folder?

Error comes, when Dorico saves file for a first time. I just updated one file with ö to double ö - no sync issues. txt. sync with no errors. I have tested both .docx and .dorico files from the same folder.

It is so sad that we STILL sometimes, even quite often, encounter these ancient, primitive computer problems.

I am from Finland, and, to put it mildly, I really HATE if and when I can’t use my native language alphabet. Ö, Ä, Å and ö, ä, å are OUR language. For example, an Ä is NOT an “A with two dots”. They are TOTALLY different, independent letters with totally different pronunciations!!! And “AE” is absolute NONSENSE!!!

Sorry about the rant, but when your name is Yrjö Säyppö, you do NOT want to have it spelled, or have to spell it YOURSELF, ridiculously Yrjoe Saeyppoe!!!

This is endless. Thank you so much for your patience, guys.

My rant sure has nothing, or not much, to do with the great Dorico, so sorry and thanks again.

It looks as if you’re not the only one… 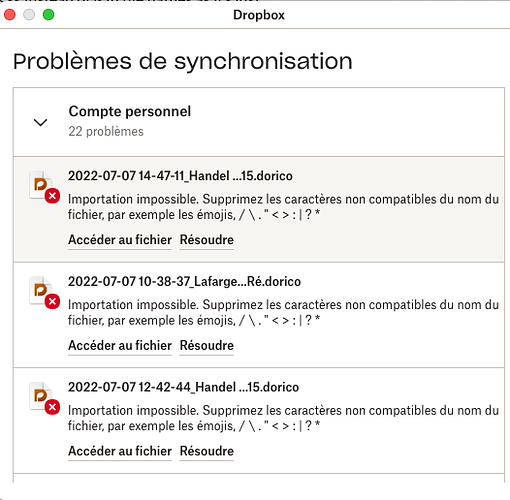 And “AE” is absolute NONSENSE!!

In the German language it is NOT Nonsense, it is simply an alternative writing.
Ä =AE
Ü = UE
Ö = OE
and it is pronounced identical. So this depends on the language. My first name is written ‘Jürgen’ but I’m used to write it ‘Juergen’ simply to avoid trouble like this.