Dear all,
I attached a screenshot of a “Stringendo” marking" that not only appears at the top of the orchestral score but also a few times in a messy way on the string pentagrams. I would like it to look the way the “molto rit.” only a few bars later appears. (Only at the top of the score.) I don’t know what I have done differently. Would love to hear some tips!

All the best,
Félix 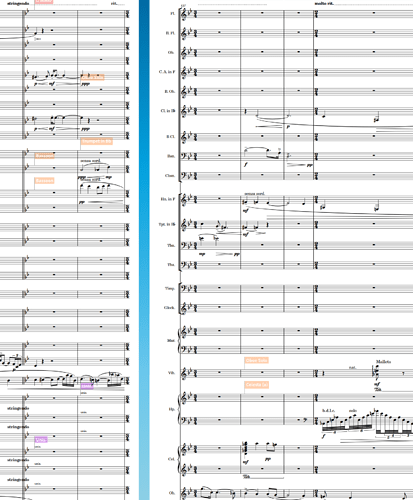 very hard to say without seeing the project. Could you provide a cut-down version that replicates the issue?

And in my guesswork: what are your settings for positioning system objects in Layout-Options? Do you have by any chance selected to be shown above of the strings?

If you save, close, and re-open the project, do you still see the issue?

Cut Out Stringendo.dorico (1.0 MB)
Here is the cut out. Thank you for your time!

did you try @Lillie_Harris’ advice? It opens correctly on my machine (DorPro 4.2): 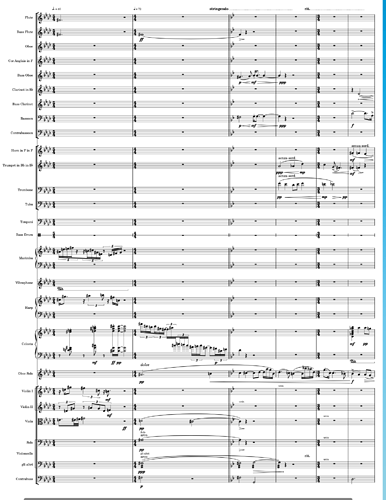 Sorry for ignoring you earlier. I was in a rush.

Haha, I wasn’t aware that I also shared the preface in that cut out. Thank you for reading through! Those errors can be embarrasing!

When I save, close and open the project the issue remains.

I now notice that in the cut-down it also appears the way I was hoping for. It must have to do with the bigger file. I’ll upload the whole thing here.
1 Resilience SO AR Timpanist + 3 Percussionists MÁLAGA.dorico (2.1 MB)

I haven’t found a fix, but I have noticed that the multiple appearance of the stringendo marking seems to be related to the the presence of unis., divisi and solo. For example, if you delete the Divisi signposts at bars 106, 107 & 108 and then invoke Undo, the stringendo marking at bar 124-5 now appears above only the top staff. However, after using Save As (to make a new version of the file) and then re-opening the new file, the stringendo markings re-appear in their original positions.

Another observation - if you select the stringendo marking and move it left or right (using alt-left and alt-right), some of the occurrences disappear past a certain point. Again, I think it is related to the presence of unis., divisi and solo, but I can’t determine a pattern of behaviour.

This next observation seems to be an important one.
When I deleted the stringendo marking and re-entered it at a slightly different point in the bar (one eighth-note distance away from where it had been) it behaved itself, at least until I moved it left or right. Lengthening the extension line on the stringendo caused the appearance of the extraneous markings if the extension line crossed a barline and extended into the next bar.

Hopefully, someone with a more analytical mind might be able to use these observations to dig a bit deeper into this issue.

Edit:
After a bit more experimenting, I think I have a workaround for you. 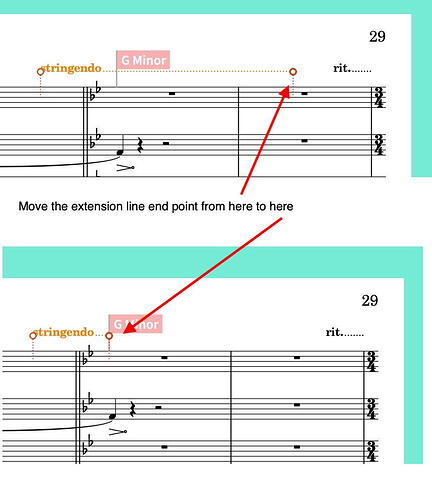 In Engrave mode, select the end point of the extension line after the stringendo marking and extend it to where you want it. A quick way of doing this is to open the Properties panel and set the End X (in the Tempo section) to 35 spaces. 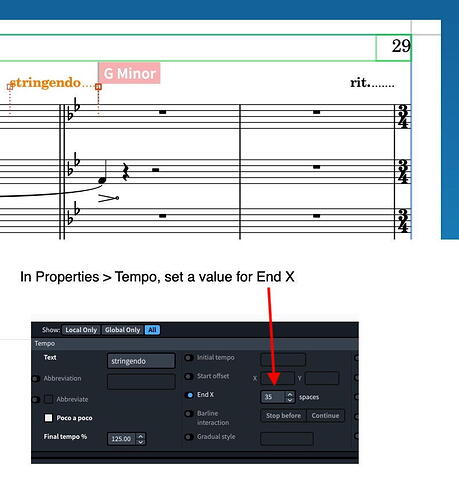 WOUW. I am deeply impressed. This works. Thank you so much for your time and ingenuity!

(I just added another line in my “Thank you” notes: …to the altruistic people in the Dorico forum for solving my many technological problems!)